Did you see the Super Bowl commercial “Like a Girl?” It flashed through my mind as I watched our youngest child, five-year-old Anika, participate in her first peewee wrestling practice last week. It was her idea to join peewee wrestling—and she was springing with anticipation. Thanks to some coaching from her teenage brother who learned a few wrestling moves in elementary school, she was ready. 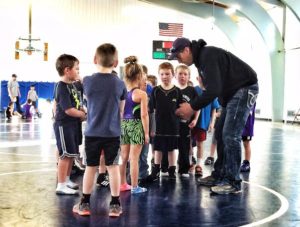 I know a lot of girls have paved the way ahead of Anika. However, in our rural town, where we have four recent straight state dual championships and two consecutive individual titles, wrestling has been a sport for boys. While there have been a handful of girls, such as Anika, who have wrestled in their preschool and elementary years, none of them have stuck with it. Maybe it’s because they weren’t given the sign-up sheet—no one asked them to join. Maybe it’s because their parents didn’t encourage them to give wrestling a try.

A few years ago, at a school board meeting, I was told girls are welcome to participate in wrestling. I was still skeptical. 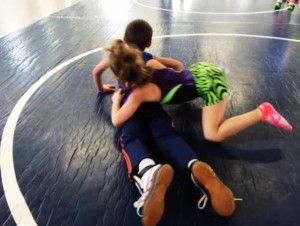 Watching Anika command her mat at her first practice was a bold reminder:  Wrestling can be for girls.

Why did I feel intimidated when my little girl stood amongst 44 boys at the first practice? She later told me, “Being the only girl, Mom, makes it so fun!”

No one in our house has ever told Anika she can’t wrestle.

No one in our house has ever told Anika wrestling is for boys.

After three practices, if anyone dare tell her wrestling is only for boys, she will look them square in the eyes and tell them they are wrong because she is a wrestler and wrestling is for girls and boys.

As I watched Anika bravely step on the mat, I saw a glimpse of her future. When she’d get thrown down and pinned, she’d hop back up with a look of determination on her face. I could tell she was trying to figure out how she can come out on top the next round. 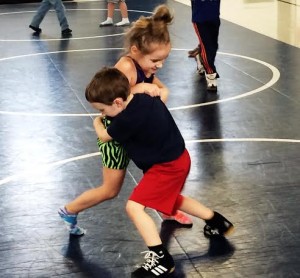 My mom went to track practice in the early 1970s but was never given the opportunity to compete at a meet.  Then Title IX went into effect, changing the future of girl’s sports.

My Aunt Holly and her friends played boys basketball until their small-town school finally started a girls program in the late 1970s. In 1982, Holly earned a college scholarship to play basketball. In the early 1990s, my seventh grade science teacher offered to teach me how to throw the discus. I didn’t even know what a discus was, but no one else in my family had done it before. Eventually, I earned a Division I track and field scholarship. I threw a discus like a girl.

More than 15 years and the harsh realities of the real world have dimmed my recollection of the grit and passion that drives young athletes. Watching Anika wrestle erupted a flood of memories that landed me back at my first discus practice.

As she does so often, Anika approached wrestling practice her way. Dressed in a gymnastics leotard and mismatched socks, she didn’t look like the boys. But she is an equal. Whether she wrestles beyond this year, Anika’s tenacity is a reminder we all need to encourage our kids.

Participation in extracurricular activities is waning, not just in our rural school but across the country. I call it the video-game syndrome. Kids play video games at the expense of sports, music lessons and drama productions.

The good news is the syndrome is reversible. Parents need to inspire their kids to try something different, which in turn cultivates a passion and teaches devotion from beginning to end. When I signed the $25 check for the four-week wrestling season, I said to Anika: “Daddy and I are paying for this, and you can’t quit in the middle of the season.  You have to keep going. If you don’t want to do it next year that’s fine but you have to stick to it since you decided to join wrestling. OK?”

“I’ll get knocked down, Mommy but then I will just get right back up again,” she said. “And I won’t cry like Hunter did at wrestling,” remembering a few stories from her brother.

After the hour and a half practice was over, all the boys ran to the locker room to change. Without skipping a beat, Anika loudly asked, “Where is the girl’s locker room?” I smiled and said: “I don’t know. Go ask your coach.” She marched right up to him and asked the same question. He smiled and motioned for another coach to escort her to the girl’s bathroom. By the smile on her face, I could tell she was thrilled to have the bathroom all to herself.

On the way home, Anika said: “Mommy, I’m not your baby anymore. I’m a wrestler.”

That’s my girl, forging her own path.

How can you encourage your kids to find their passion without imposing your past on their present? 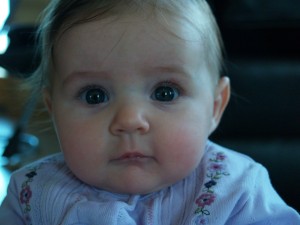 Previous Post: « Cows Not Required: 7 Reasons Why Your Kids Should Participate in FFA
Next Post: “My Ring’s Birthday” »