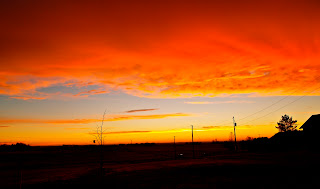 The morning sky on prairie this morning
One hundred years my Norwegian speaking great-great grandmother was not voting on the North Dakota prairie. She was widowed, raising seven children in a sod house while farming on the prairie. But she didn’t have the right to vote.
For this reason, I am not a casual voter. I am an educated voter. I don’t miss my chance to vote.
Long ahead of voting, I look at the candidates and the issues most important to my family, values, business and the overall economic health of my county, state and country. Doing this helps me strengthen my opinions on what I believe and deepens what values I represent and why.
I stand up for what I believe in and advocate for causes.
I show and share what I am passionate about and then cast my vote to back up what I say. 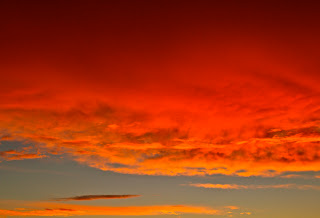 A beautiful voting day sky
This year how I learn about who and what I am voting for as well as the methods I used to advocate and champion causes I care about has changed using social media outposts.
I can live on the remote and rural North Dakota prairie and be just as educated on who and what I am voting for as a voting in a major populated area.
Not one candidate or campaigner has knocked on my door but they have reached me via social media.
Whether it be political ads on web sites, news articles about issues, videos on YouTube, a Facebook conversation among friends or a television interview, I have gained more information in preparing to cast my vote than ever before I was engaged in social media.
As I became more educated on issues I was passionate about this fall, I used social media to share my opinions and impact others. I respect a difference of opinion but I wanted others to educate themselves and think about how impactful their vote can be.
What would my great-great grandmother think?
I hope she would be proud that five generations later, we are still here on the North Dakota prairie like she was one hundred years ago but have made great progressive strides. Because of her legacy and impact she had on our family for generations, I am an advocate. And today, I am an educated voter going to the polls to cast my vote.