Class B boys basketball officially wrapped up this weekend. We went to Minot, North Dakota to watch as fans.

Our boys team finished their season with a third place Region 3 win on March 10. Our favorite player/son wasn’t playing in “The B” his senior year like he always dreamed of but still accomplished part of the goal he set for himself in sixth grade. He was named to the Academic All-State team which is a combination of academic accomplishments, leadership roles and community involvement. 30 students are awarded the recognition.

As a young sixth grade basketball fan Hunter told us he wanted to accomplish academic all-state recognition while playing in the semi-finals of the North Dakota Class B boys basketball tournament. The award is always recognized in between the semi-final games.

Hunter’s smile back at me from the court Friday night showed his pride. 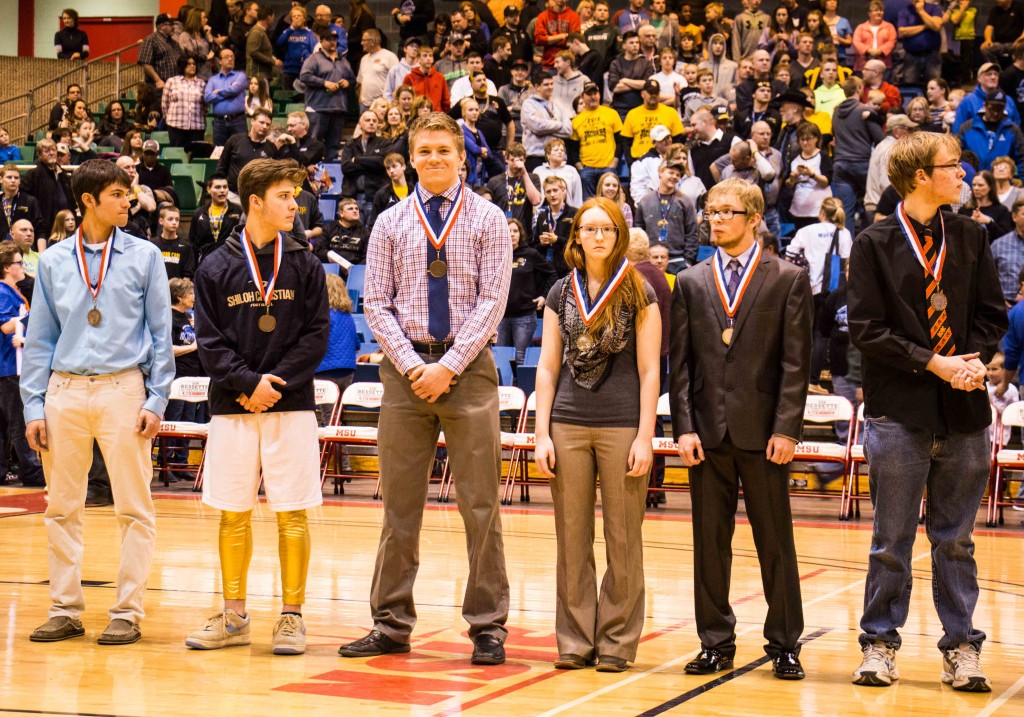 The other part of his face I see in the picture is, “Mom! I want to stay on this court and keep playing!”

But all chapters come to an end.

High school basketball ended the week prior for Hunter and the South Border Mustangs. It was a glorious moment as Hunter passed from down low to his fellow senior teammate Matt who sunk a three-pointer buzzer beater over the Linton-HMB Lions, 68-65 final in the Region 3 third-place game. It was Hunter and Matt’s first win of their high school career over the Lions. If we weren’t going to State B, it was the next best win.

Hunter shouted on the court, “I’ve never been so happy with third place in my life!”

If we were playing Class A North Dakota basketball, we would have gone to State with third place. But this is Class B, small school basketball.

The winning a regional championship to go to “The B” in basketball is a rarity for most small schools and even more special when you make it.

Hunter ended his high school basketball career with broken school records and special accolades but never winning a championship and never going to state. 2nd, 3rd and 4th place through a varsity basketball career in Region 3 never gets you to the State B boys basketball tournament. You feel so close…and so far away. My husband felt the same feeling as a former player in 1994 and certainly felt it again as a parent in the stands. 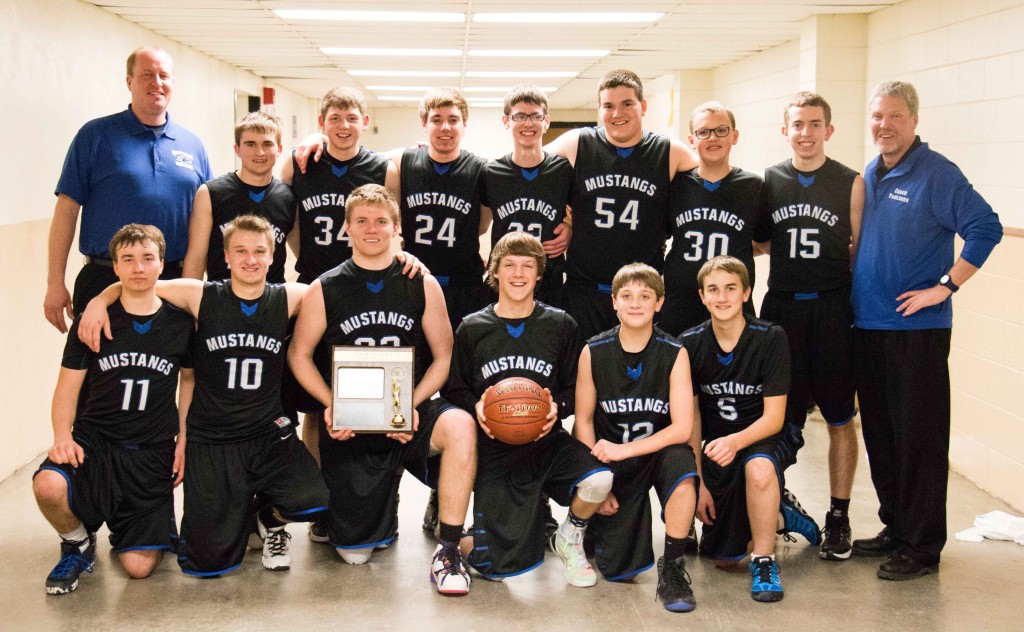 In the end, the relationships and lessons last longer than the wins, losses or accolades. Our head coach was my husband’s basketball teammate. Their high school careers ended 22 years ago, without a much-anticipated trip to “The B”. They remain forever friends.

I wouldn’t have wanted our son to have any other Class B experience than the one he had. He learned to stick with his teammates, work hard in the off-season, play selflessly and most importantly through examples and teaching, to give glory to God.

What makes Class B basketball so special to Hunter and to all of us is the community of it, the people who lead by example and care.

Hunter received phone calls, letters and numerous personal interactions after a double OT win, a loss and then the last win in regionals.

All types of people support all types of kids in Class B North Dakota. They are intensely loyal. 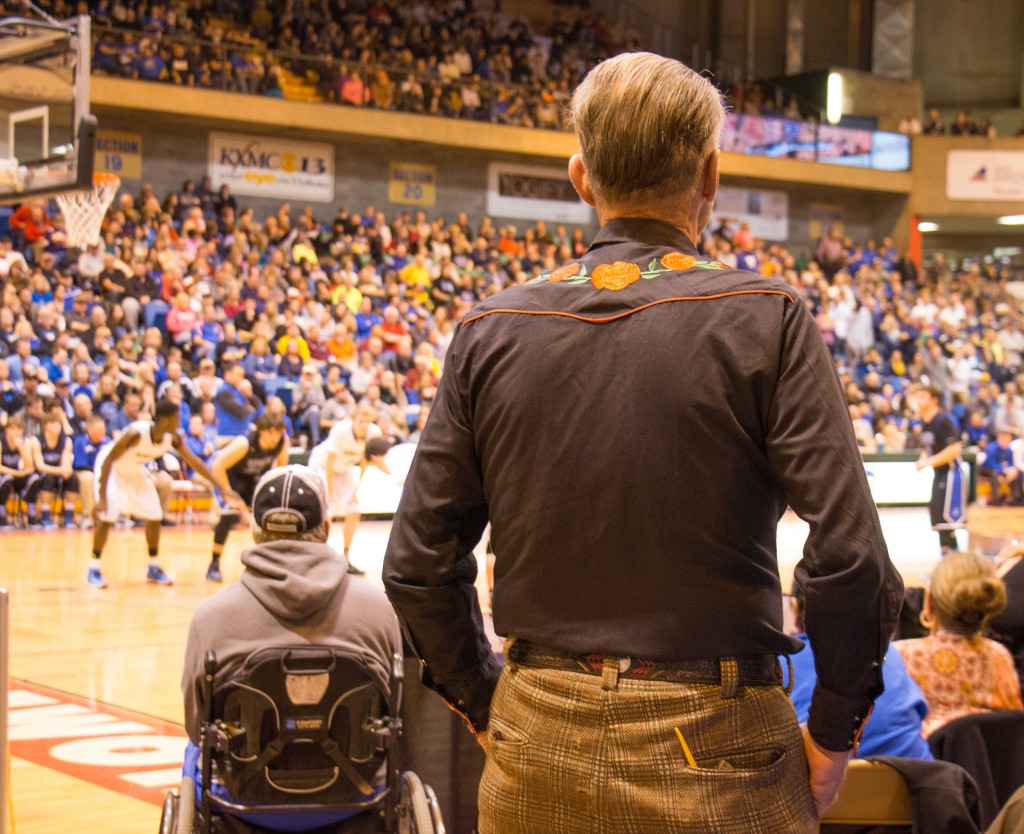 I imagine you know them, might be one yourself and have experienced their loyalty and cheering. (I have no idea who this great fan is but I was coveting his vintage, classic shirt. It’s very Class B of him.)

Our son learned values through Class B sports, programs and competitions that are not taught or learned through experiences elsewhere.

The values of Class B basketball were showcased in the consolation championship when Northern Cass didn’t go into the locker room at halftime. Instead, they shared their bench with a Special Olympics team and cheered them on. It made a statement and I held back a few tears. 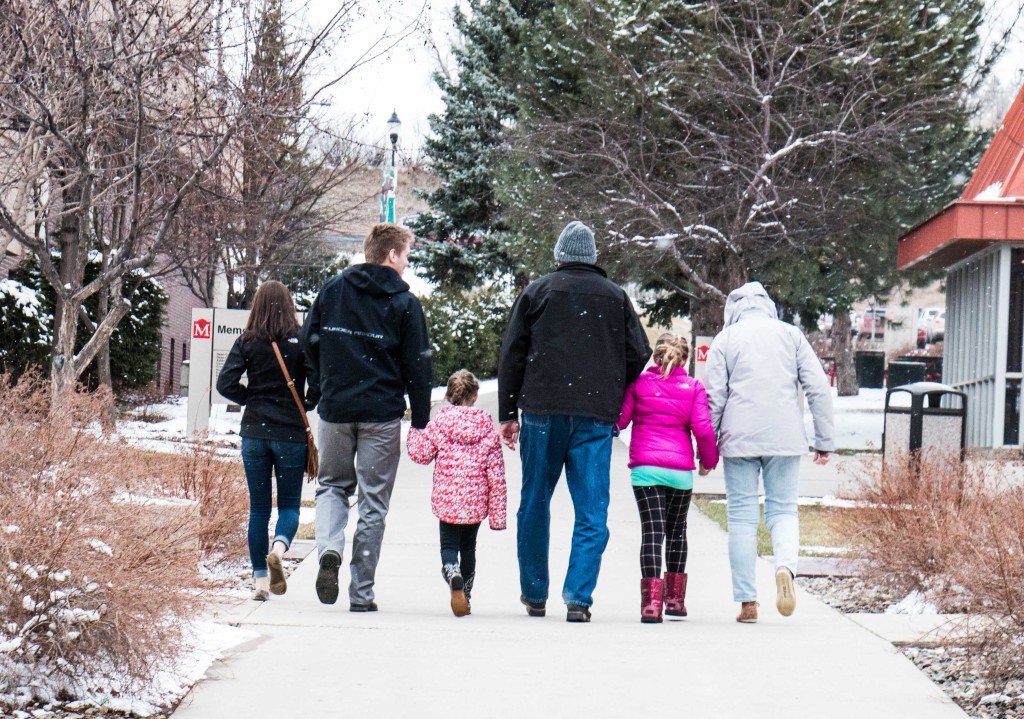 A longstanding value of Class B basketball is family. My parents have been taking Hunter to Class B boys basketball tournaments since before he was in school. I watched all three of our kids, plus a friend and my parents walk ahead of my husband and me into the semi-finals of the tournament on Friday night before the Academic All-State recognition.

Three generations of a family sit in the stands to watch Class B basketball together, no matter the teams playing. Our fourth generation, my grandparents were at home on the farm watching on television. My husband often says my family’s hobby together is watching sports. It’s true. Class B sports connects our family.

I wouldn’t trade the family values taught through North Dakota Class B sports for any other sports experience. 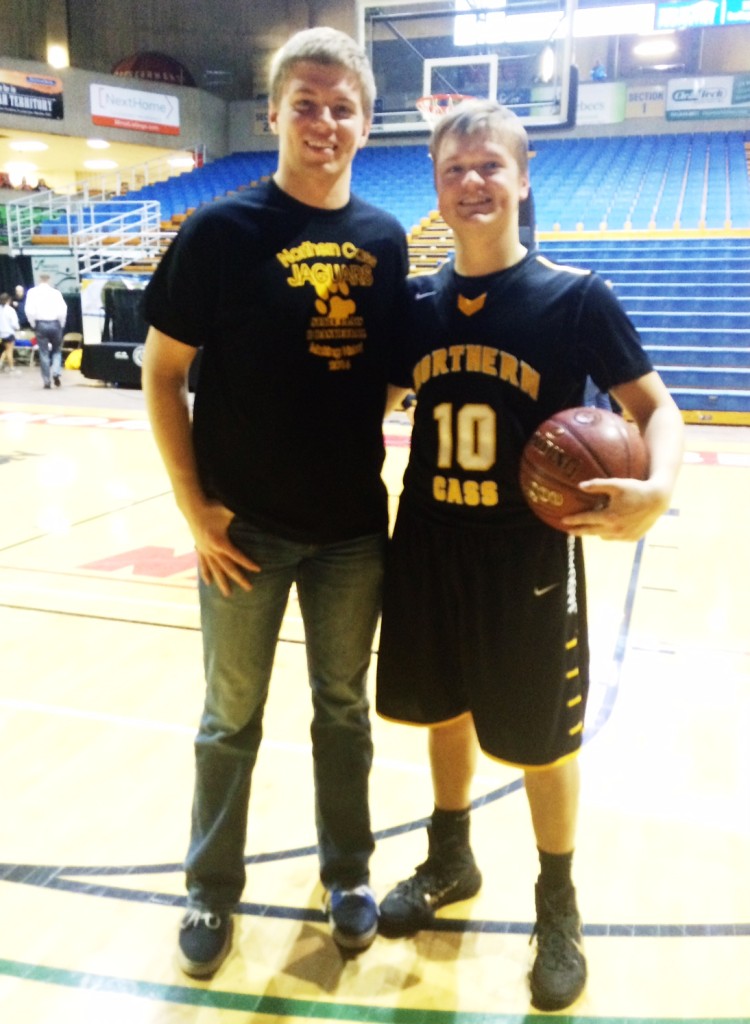 Blurry phone picture but another value of Class B sports is friendships.

The family values extend across bloodlines actually. These friends are often like family, despite sometimes living hundreds of miles apart.

Hunter and Cody played traveling team basketball since fifth grade together. Thousands of miles, hundreds of games, scores of hotels stayed in together. They never played on the same high school team. But they shared common values and experiences.

Now they are lifelong friends. I cheered and prayed for Cody in the State B this weekend like I would for my own children. Northern Cass, Cody’s team, won the consolation championship and he was named to the All-Tournament team.

Class B boys basketball ended for Hunter with family and friends by his side. We celebrate the experiences, the teams, the people, the values.

When we walked into the State Championship game, a Four Winds- Minnewauken Indians fan greeted us and we snapped a picture. 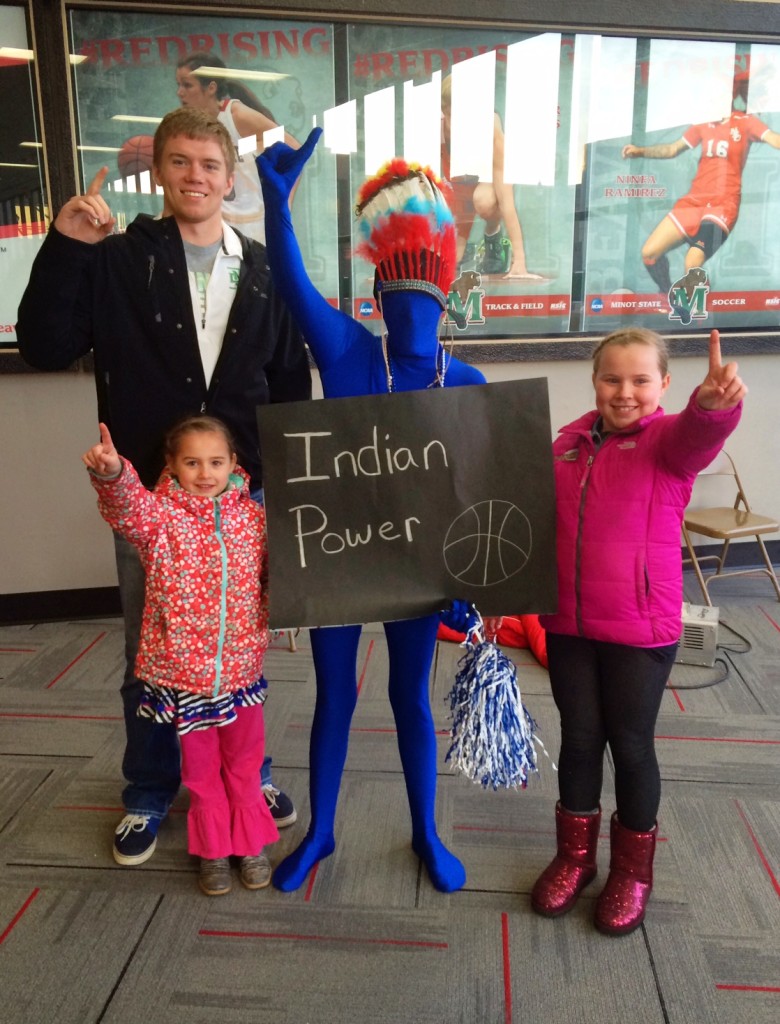 The best Class B cheerleaders are the self-appointed ones.

We cheered in the Four Winds-Minnewauken section and watched the Indians win their first state championship. It was a great ending to see a hard-working rural team and coaching staff triumph and win before 9,251 fans. 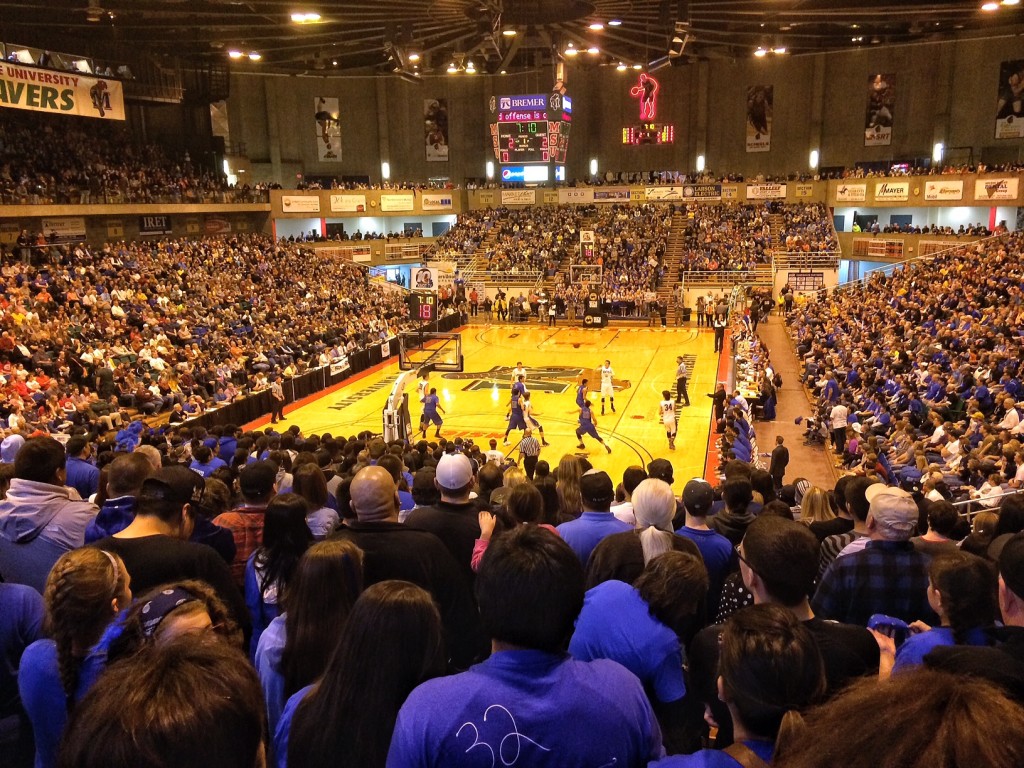 When our girls went to bed in our hotel room after the game, they practiced their own starting line-ups with their names being announced in a future state championship game.

A new dream is planted and we are turning the page to a new chapter.

Family. Friendship. Fans. We love and celebrate our small town experiences for our Class B kids.

Previous Post: « National Ag Day: Agvocating for a next generation
Next Post: A slice of Americana: Nana’s homemade game-day meals »