After 25 games this season, our son and the Mustangs team ended their season this past week. It was hard to swallow.

Any fulfilling and exciting life chapter is difficult to close. High school basketball is one of those chapters. Every year, some seniors graduate. Every year, I realize we are one year closer to our son, Hunter being done himself with this chapter.

As soon as the game ended, I had to drive to Fargo to board an early flight for a 24 hour business trip that I had delayed all week to be a mom in the stands with my family at the regional basketball games.

I was still thinking about basketball on a flight early the next morning and decided to download pictures from the tournament onto my computer.

The man sitting next to me could see my photos and was looking up from his MotoCross magazines. He was in his late 40’s I would assume and started asking about the photos. He then started to share his own story.

He has a 18 year-old senior in high school son who wanted nothing more in high school than to be a basketball player. But they live in a major city. He said “We need a B and C high school, just for the kids not big enough, not fast enough, not prestigious enough to play at the A level high school.”

I understood his words. He pointed at his magazine, “That’s why we got into this. Basketball crushed him, not being able to play in high school. So I found MotoCross and now we do it together and race. I flew home last night just to practice with him for four hours for  a race this weekend and have to fly back again tonight.” What a lucky son, I thought, to have a dad dedicated to making his son’s life active and fulfilled, despite not achieving his initial high school dream of playing basketball.

I explained to the passenger that I attended an “A” high school, where kids were cut from teams. You had to choose your focus. But my siblings and husband all went to a “B” high school. It was important to my husband and I that our kids have that small school, inclusive experience, where kids get to be in a variety of activities. As I looked through the pictures I said, “Yes,  we are indeed a “B” high school. Class B in North Dakota to be exact, for small schools.”

Our school is made up of kids from our small town. 1000 people. Our sports teams combine with our neighboring small town to create our teams. As the pictures kept downloading, hundreds of them, the passenger asked questions as he saw them. 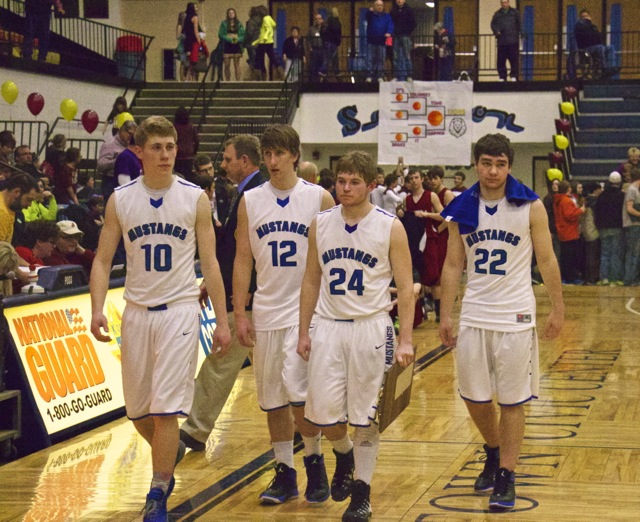 I explained about our seniors, boys that have played together for years, since elementary school and with our son since he was an eighth grader. I explained that everyone gets to play. No one is cut. If you want to play basketball, there is a team for you.

The passenger explained the eliteness of basketball and sports in their public, major city high school, almost like a college prep school for sports. I laughed and said I thought our version of high school sports teaches more life lessons that our players will apply to everyday life for decades to come. I talked about the camaraderie. The team built around the kids that play the sport, regardless of socio-economic circumstances.

The passenger said, “Our coaches are all figured out by professionals because there are a few boys in our school system that have older brothers playing professional basketball. So they’ve brought in big time coaches. And they bring in big time players with them.”

His words had a sting of sadness to them. My heart hurt a little for him, as a fellow sports parent. Because even though he was dedicated and now doing MotoCross racing with his son, all he really wanted I could tell was what was being downloaded on my computer, the authentic atmosphere of small town sports.

I continued to give him an inside look through my photos on my computer screen.

I talked about my brother the coach, the one and only  fourth grade teacher  in one of our towns, his small town high school background, his experience both athletically and musically, his coaching mentors and love for the game of basketball. I talked about the assistant coaches, another teacher in the neighboring town of our sports cooperative and a longtime, experienced coach, who exudes passion and excitement. I talked about the new assistant this year that moved back to farm with his family but that he had been coaching for a few years under one of the best Class A coaches in North Dakota. I talked about all of their ethics and discipline.

I looked up at the passenger and said, “I guess they are professionals at helping boys become men.” He nodded and smiled. I knew, that’s what he had wanted for his son in team sports. 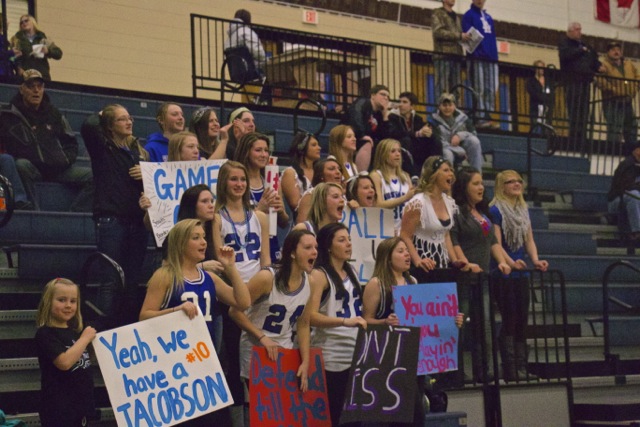 As we continued to look at pictures, the passenger talked more. He wanted the class of 19 kids like our son has. Or the class of 22 like our daughter has for his kids. The classes that get out of school early to drive 90 miles one-way to be at the afternoon opening round of the regional tournament. These are kids that yell, scream and cheer with undying spirit. These are kids that let the kindergartener, our daughter, Miss E stand with them and hold up signs of support for our team, because kids in small schools know each other from kindergarten through high school. 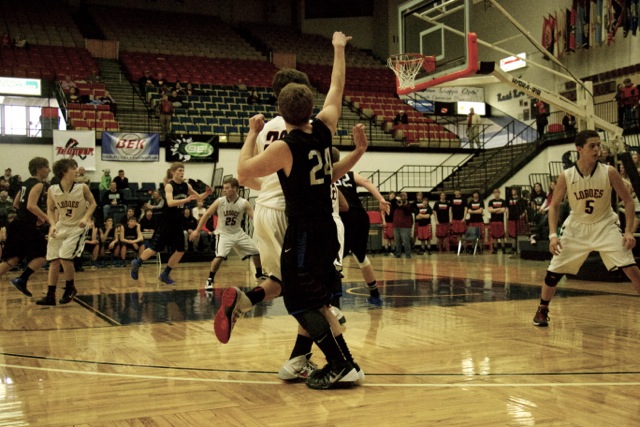 I showed the passenger what the kids were yelling about this past Monday afternoon. At 3 p.m. in the first round of the regional tournament, we played the number one seed, the defending region champion. This was the team that we lost to the regional championship last year. The team that Hunter’s past teammates, graduated seniors now in college, had lost to in every regional tournament of their high school career. The team that our sports cooperative, South Border had never beat.

But after trailing by 19 points in the third quarter, #24, a senior made consecutive three pointers to cut the lead.

And a group of small town boys, who had struggled through the district tournament the week before, never quit working. They never quit fighting, knowing a loss would end their season. They never quit believing that they could beat the big number one team they faced.

The passenger said, “Well, what happened? He was sitting up straight now, leaning towards my computer to see more pictures. I told him how my coaching brother always says, “We are preparing to win in the post-season” and how he never gets too rattled about a close loss during the regular season. Somehow, I knew that the coaches had a plan to pull off this win and the boys all believed in executing the plan. It was apparent in the fourth quarter.

We played tough defense and stopped the team from scoring. We cut the lead to just one point, 52-53 with three minutes left in the game. 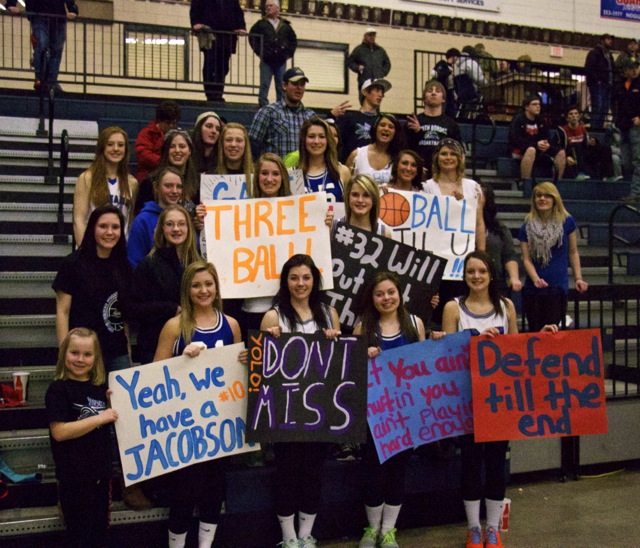 And the crowd never stopped cheering.

When our son made a basket to bring our lead to 61-54. I started to cry I told the passenger. I knew then we might do it. We might pull off the upset. Then I looked over at my brother, standing by the bench. Then, I knew we were going to pull off the upset. He and the other coaches had prepared the boys to win.

And we did. The Mustangs won, 63-58 over the Loboes. The Loboes, the team expected to win the regional tournament and go to the state tournament, looked stunned.

The passenger’s face lit up with elation. I told him it was a moment, a game and now a memory that our son Hunter said, “I will tell my kids about this, probably my grandkids.” 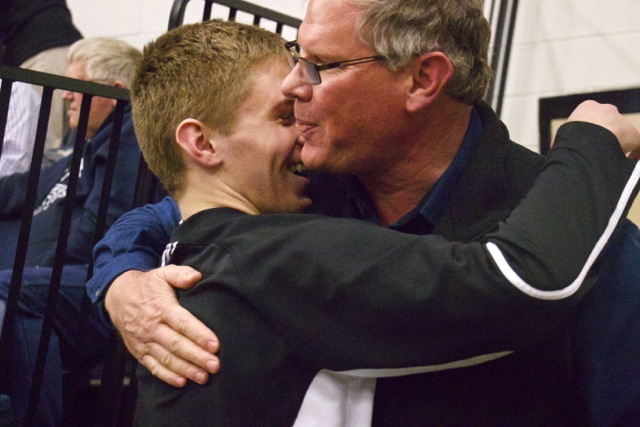 I showed him the picture of my dad, who has shared his glory days of basketball with us through stories for decades. My dad, who Hunter has emulated as best he can in his whole life of sixteen years.

The passenger said, “Are you going to State now?”

After being a highly successful free throw shooting team, the ball didn’t swish through the net the next game. We turned over the ball too often. We didn’t win.

Suddenly, I felt a little disappointment, telling the passenger that it was the end of our season, just the night before I boarded the flight.

The passenger looked up from staring at my computer screen filled with pictures of Class B North Dakota high school basketball said, “But it doesn’t really matter, does it?”

I swallowed hard. I wasn’t going to cry on an airplane to a stranger sitting next to me, looking at my pictures. I smiled and kept staring at our team picture but I am sure he saw my eyes had a little extra moisture in them. He had just reminded me of an important lesson.

I had what he didn’t have, what he had wanted for his son. He saw the advantages in small town sports. We get to live out the advantages, even if we aren’t going to the big dance of the state tournament.

He said, “It’s so good for me to hear, you know that kids still get that experience. That small town sports experience. That any kids can still play if they want to put in the time and work and be a part of a team.” The passenger paused and then continued.”My wife’s parents were from North Dakota…Devils Lake? Do you know where that is? I’ve never been there.”

I smiled and nodded. I’m a North Dakota girl. Of course, I know Devils Lake.

The passenger opened his MotoCross magazine, looked down at it again, “Maybe we should have raised our kids in Devils Lake.”

I looked back at my album now on my computer of over 700 pictures from our high school basketball season. Maybe.