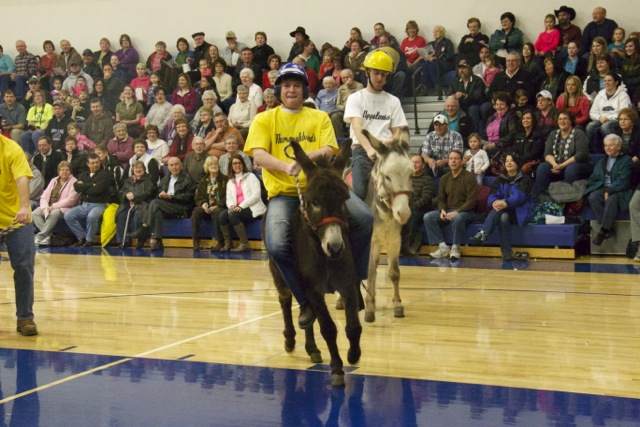 We had some small town Monday night for a good cause. Donkey Basketball.  You never have heard of it? You once saw it when you were a kid? I had never heard of it until I heard the donkeys were coming to our small town. 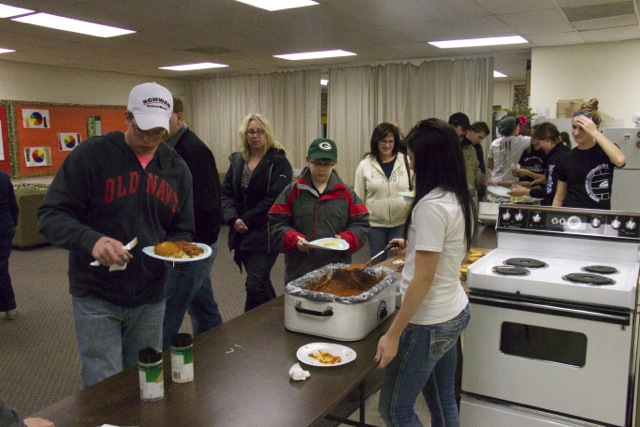 Why donkey basketball? There is always a need for numerous programs to fundraise. For the girls and boys basketball programs, Dairyland Donkey Basketball was something unique to attract the locals in our small town to come out on a winter night to support a different fundraiser. Through the work of parent volunteers, business and personal donations, players and coaches  first there was a Spaghetti Feed and then Donkey Basketball.  I haven’t seen the gym so packed since we hosted District Basketball tournaments. It was a rare Monday night and a special one. It showed how our communities support our schools and teams. Our team is the South Border Mustangs and our schools are Wishek and Ashley, 26 miles a part in south-central North Dakota.

My brother Robbie is the South Border head boys basketball coach and 4th grade teacher in our small town. He is a man who had a scholarship to college for both singing in a concert choir and to play basketball. Most people in our small town don’t know what an amazing voice he has. (Listen here.) Tonight he was both a singer and a basketball coach. Robbie led the crowd in the Star Spangled Banner and as head coach he was on clean up duty for donkey basketball.

It is not all fun when you are clean-up crew.  But there was plenty of fun to go around the gym during donkey basketball. 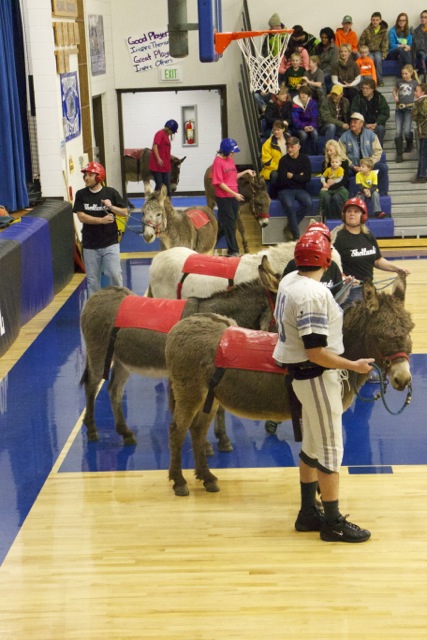 The teachers were ready. 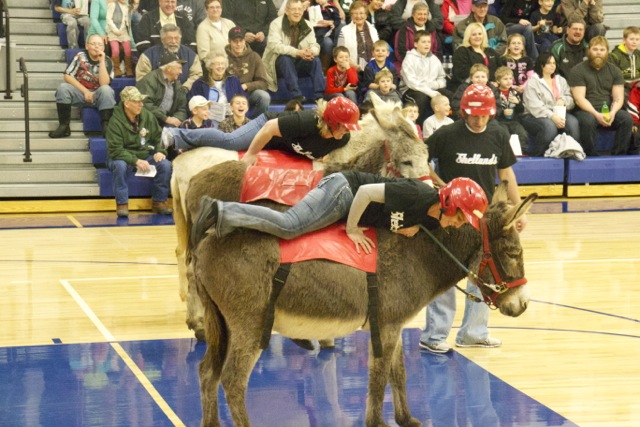 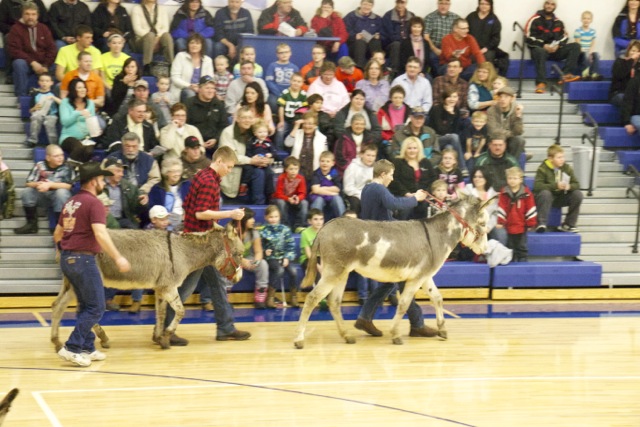 Our son Hunter didn’t ride a donkey but kept the reserves in the corner of the gym. He visited with the owners and was with the animals from when they arrived until the end. He said the donkeys are cared for like children and it is truly a family business. It has been in this family since the 1930’s. Once he told me that, I felt even better about the fundraiser. 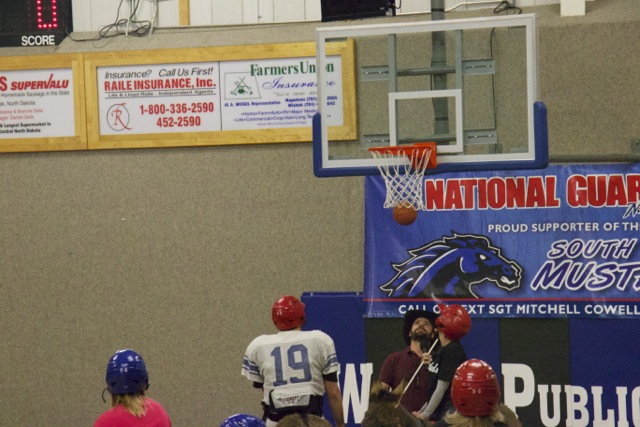 All the teams  learned there is a curve when figuring out how to score while staying on your donkey. But all the teams figured it out, with trial and error.

Intermission included donkey rides for kids 12 and under. They were a big hit! 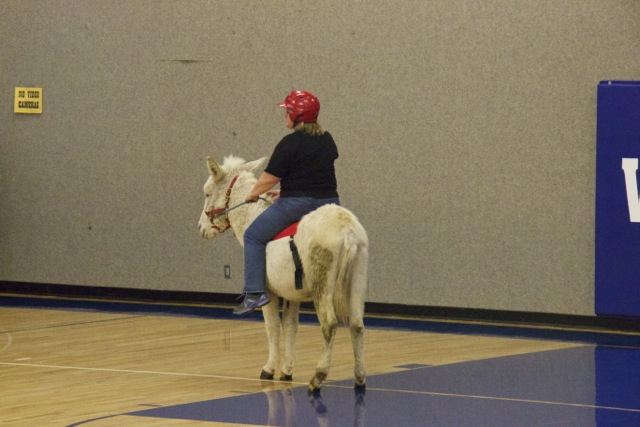 Not every donkey was keen on playing basketball. 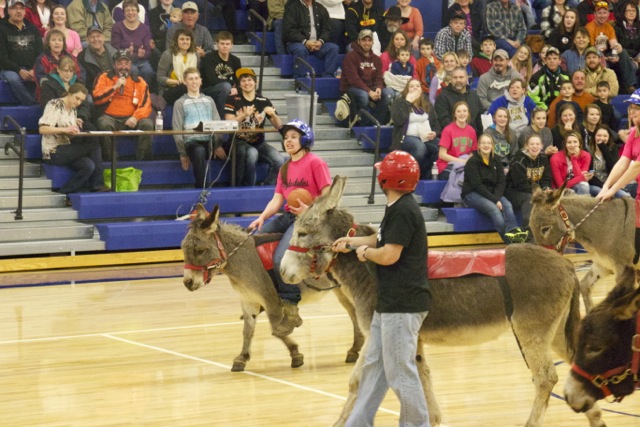 But a few of them love the game. 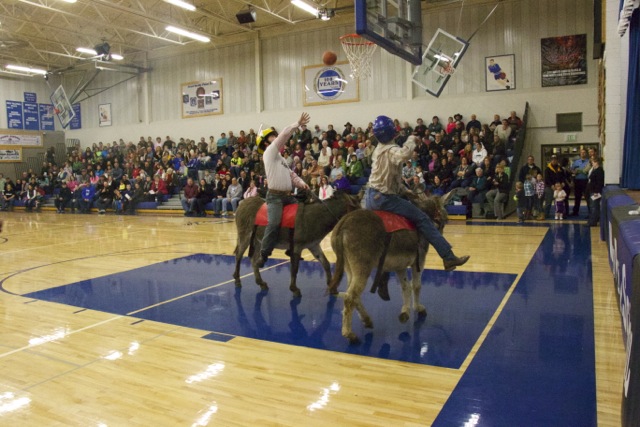 It is loudest and hardest I have seen many laugh in our town. Good, old-fashioned small town fun.

The lightest guy on the court rode the smallest donkey. But D has grit and determination.

The smallest can still score!

Sonia and Melisa had a few practices with young girls including Miss E for a mini-twirling performance at an intermission. I have the full video uploading and will share it soon. It was adorable.

The boys basketball team learned to play defense in donkey basketball against the firefighters, who are all cowboys and horsemen. 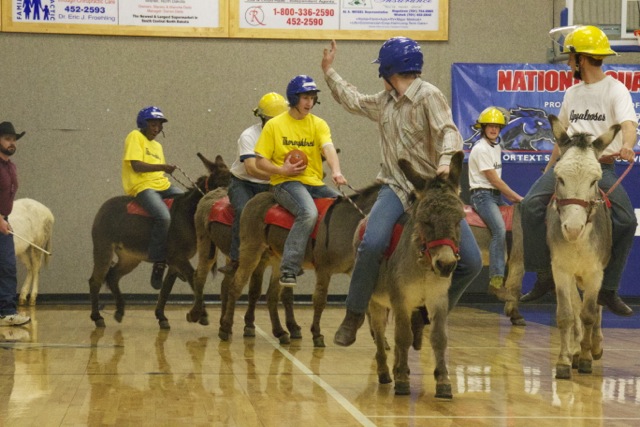 But the boys basketball team has a cowboy too. It created big excitement.

Parking in the lane is against the rules but many tried it.

Not everyone stayed on their donkey. No matter how experienced they are on a horse, riding a donkey is not the same. Add a ball to go in a hoop to it and you have hilarity. 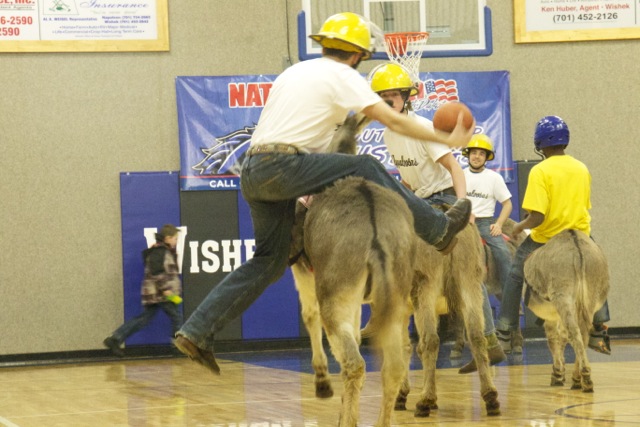 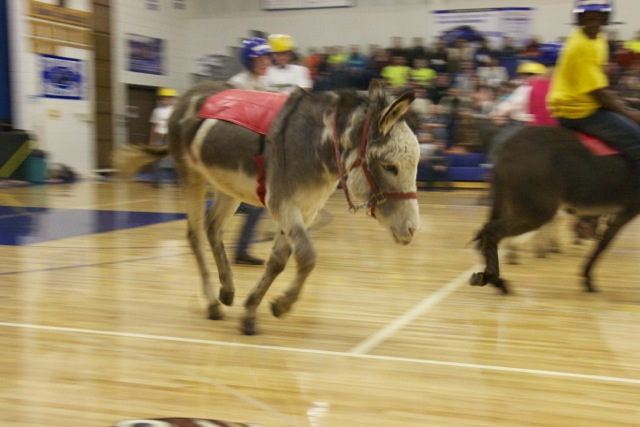 And this donkey showcased his skills as well on how to get rid of a cowboy basketball player. 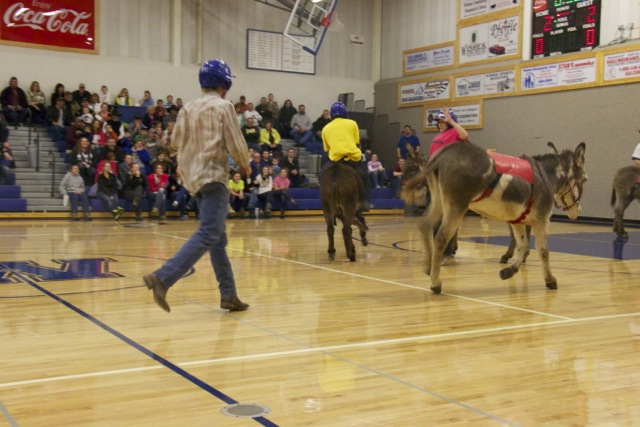 But Reed chased him down. In the end, Reed the cowboy basketball player had to have a belly flop contest as a tie-breaker with Dave the cowboy fire chief. Creative fun. (Dave won.) I decided donkey basketball is our winter version of small town fun compared to summer time ranch rodeo and boot scramble fun at the fairgrounds.

Donkey basketball was a huge success of a fundraiser for our basketball programs, a fantastic turnout and definitely an idea for any of you searching for something unique to get people to come out to support your schools or sports program.

Some city schools might have black-tie, plated dinners for fundraisers. We had donkey basketball. Jeff Foxworthy could create a whole night of jokes from it. But it’s authentic fun and community-minded. And donkey basketball created a night that we will all remember for decades to come from our small town on the prairie.

What do you do for local fun while raising money for a good cause? Ideas welcome!

Previous Post: « So This Is 35…The Happiest Years of My Life
Next Post: Moments That Matter: Grandpa’s 89th Birthday »