“During my time in college I have taken advantage of opportunities to speak to community groups, school children and college classes in order to tell the story of agriculture. In order to have a better understanding and more credibility with my audience and rapport with producers I wanted to have crops of my own. Through help from my father who used to farm and my brother who currently does I was able to plant my first crop in the fall of 2012. I planted 40 acres of winter wheat. I harvested the wheat in July and then planted soybeans behind the wheat two days later. Although on a much smaller scale than most, having crops of my own has allowed me to not only understand what it takes  to put in and harvest a crop, but equips me with background knowledge that is very helpful as I prepare to enter the work force.”  Anna Leigh Peek, currently a senior at Auburn University in Auburn, Alabama

Americans are at least three generations removed from the farm. But there is a next generation coming into agriculture that is working to change that trend and disconnect. The next generation includes Miss Anna Leigh Peek, not just a sweet, Southern, soft-talking lady but a passionate advocate for agriculture. Anna Leigh was a middle school aged girl when her parents quit farming yet she has kept it her dream to farm again. She is not only majoring in Agricultural Communications in college. She is farming. A young female farmer in Alabama. That inspires me.

When I met Anna Leigh this past August at the AgChat Foundation’s Agvocacy 2.0 training in Charlotte, North Carolina, I was struck by her charming personality, confidence in who she is and focus on her future. And then she told me she had worked in practically my backyard all summer and missed okra and fried chicken. I could have been the first Dakotan to reassure her that just a couple of us do indeed know what okra is. And I love it. I probably can’t fry chicken as well as a Southerner but I would have tried for Anna Leigh.

I have a great amount of respect for the next generation of agriculture because I know women in agriculture like Anna Leigh are a part of it.

Read from Anna Leigh in her own words today. Her faith is bold. Her words are full of wisdom beyond her years. Her future is bright. And agriculture’s future is brighter because of young farmers and students that are leading by example. Just like Anna Leigh Peek, originally from Elkmont, Alabama and now residing in Auburn, Alabama.

What is your role in agriculture today? I am currently a student and farmer. I am finishing up my senior year at Auburn University where I am studying Agricultural Communications. I plan to graduate in May of 2014 and I am currently seeking a job in the agriculture industry. 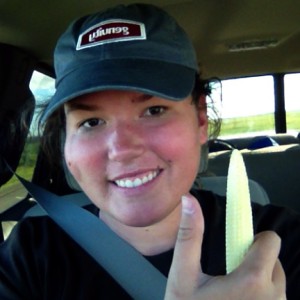 I actually started off at Auburn studying poultry science because of insight gained into the poultry industry through 4-H Egg Demonstrations. Alabama is the 3rd largest producer of broiler chickens, it just made sense. I had always been told if you get a degree, you can usually do somewhat whatever you want with it job wise. However about half way through my freshman year I realized that I did not want to work as much with science as I wanted to work with people and helping them to understand the science. I changed my major to agriculture communications so I can be better equipped to help better tell the story of agriculture to people who aren’t as familiar with it.

During my time in college I have taken advantage of opportunities to speak to community groups, school children and college classes in order to tell the story of agriculture. In order to have a better understanding and more credibility with my audience and rapport with producers I wanted to have crops of my own. Through help from my father who used to farm and my brother who currently does I was able to plant my first crop in the fall of 2012. I planted 40 acres of winter wheat. I harvested the wheat in July and then planted soybeans behind the wheat two days later. Although on a much smaller scale than most, having crops of my own has allowed me to not only understand what it takes  to put in and harvest a crop, but equips me with background knowledge that is very helpful as I prepare to enter the work force.

How has agriculture shaped your life? The first 13 years of my life I lived on a diversified row operation in North Alabama, our main crop being cotton in addition to corn, soybeans and wheat. I wouldn’t trade growing up on a farm for anything. I have such a great appreciation for the 2 million farmers that grow our food here in the United States. 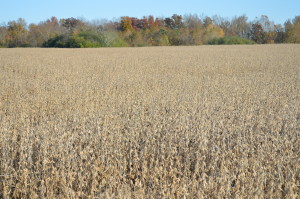 I learned the importance of hard work from a young age. My father and grandfather were great examples and my two younger brothers and I were expected to help when we could. I had always thought growing up I wanted to be a farmer, but when my dad stopped farming in 2004 I didn’t think I would be able to. My younger brother Brady who is a junior in college has planted crops the last several years and hopes to farm full-time eventually.  I have found ways to remain connected to agriculture. It is something I have always been passionate about and have had a deep love for. Most of my friends just think that agriculture is my major, it’s just something the Peek kids “do”, but it is so much more. Agriculture is more of a lifestyle, a lifestyle I hope to continue to be around the rest of my days.

What do you do to encourage others? Who/what serves as a source of encouragement for you? I have such encouraging friends and family. I wish I could take half of the encouragement I receive and pass it on to others who need it. I have had so many people throughout my life who have offered verbal and written words of praise and encouragement to me when I needed it and even when I didn’t.  So many have also served encouragement to me through their actions of service, leadership and compassion. One way I try to be of encouragement is through cards. Hand written cards are not widely used anymore; email, Facebook and Twitter are the preferred methods of communications. I think a simple card is a great way to encourage someone or to just let them know you were thinking about them. Don’t know what to say? Simple, some cards have words already written in them so you do not even have to write much in. They are relatively cheap to send and is so much better to find in your mailbox than a bill.

What is your favorite home-cooked meal? Being from the South we eat a lot, and a lot of soul food including a lot of fried food. These stereotypes of Southerners was further validated this summer when I interned in the Dakotas. No fried chicken, only broasted, no one knew what okra was and macaroni and cheese was hard to find. In Alabama each town has at least 3-5 chicken finger places to choose from. They all pretty much offer the same menu of chicken fingers, fries, slaw, pink sauce of some kind and sweet tea. This summer when I went to Minneapolis what do you think was the one restaurant out of the hundreds I wanted to go eat? Raising Cane’s, a chicken finger place.  Although as a southerner I do appreciate fried chicken probably my favorite home cooked meal to make is grilled chicken marinated in Italian dressing (usually with a mixture of other dressings in the fridge). Pair it with some homemade garlic mashed potatoes and sweet tea, finished off some peach cobbler and I’m as happy as a lark!

If you had the opportunity to get a message across to a large group of people, what would your message be? Aside from spreading The Gospel and sharing the story of agriculture one thing I would love to proclaim from the mountain tops is to simply speak. Speak to the person cleaning the bathroom in the airport, the security guard, bus driver, the cashier in the cafeteria. You never know when the last time they were spoken to or were commended them for their efforts. You never know what a kind word can do for someone’s day.

Stay connected with Anna Leigh on her blog and Twitter. Thank you Miss Anna Leigh for sharing your story!

Earlier Women in Agriculture features this month include:

November 15: Jessie Thompson, The Next Generation of Idaho Ranching

November 6: Crystal Blin, Agriculture Led Her From Alberta to Iowa

For a listing of all the 30 Days Bloggers that Holly Spangler rounded up, visit here.