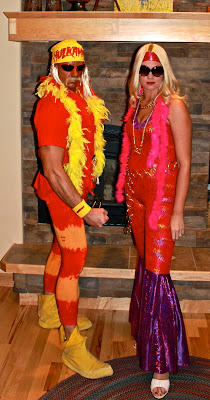 Last night, my husband relived a childhood dream and I was his disco wife as we attended a local costume party. The pictures speak volumes. My costume was not sponsored by Spanx but it should have been. If you are a woman and don’t have Spanx in your life yet, you are missing out and I’ll blog about my love for Spanx one day soon. And don’t ask me how I went to the bathroom in the disco costume. It was a fiasco. But the real star was my husband. For any child or teenage boy of the 1980’s…or die hard professional wrestling fan… 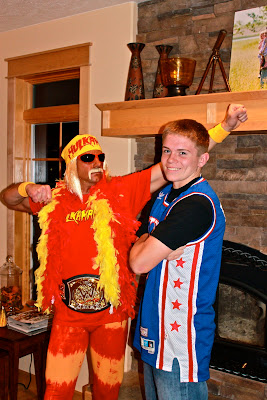 Hulkamania was running wild on the prairie last night. Thanks to Ebay and Amazon, Nathan and I pulled together our costumes quite affordable and easily. 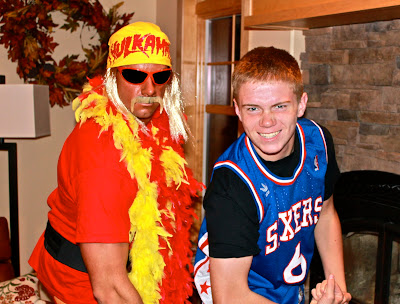 Along with a bottle of spray tan, Nathan’s costume of Hulk Hogan was complete. Our teenage son went to the school Halloween dance while we attended the local costume party. The girls had a sleepover with Nana and Grandpa which they were thrilled about and didn’t have to see their Daddy as Hulk Hogan, which would have terrified them. Pictures are enough we thought.
1st prize for best costume went to…
Hulk Hogan.
The Hulkster was immensely proud as was I, his disco wife. Last year, he won with his buddies for their Army Men costumes. Two years in a row of winning will be a tough act for us for to follow on next year. I think Nathan would prefer to be Hulk Hogan every year from now on. It was his favorite costume of his life. No reason to change a good thing now. He watched YouTube videos yesterday to make sure he had authentic Hulkster moves and lines down and believe me…he took his role very seriously. 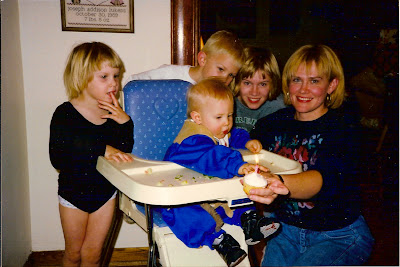 On a different note, I am reminded today of a very special moment 22 years ago today. My mom gave birth to my youngest brother, Joe, on her birthday. They share a birthday but as my mom says, she hasn’t had a birthday since that day. The above picture was Joe’s 1st birthday. Happy Birthday to two of my favorite people on earth! Stop to give a comment to my mom, Jane, who blogs at GriggsDakota.

Tomorrow afternoon the girls will be dressing up in their chosen costumes which are reminiscent of me in 1982 and we are going to our local nursing home Halloween party where we’ll visit residents and the girls will load up on too much candy. This is the only clue you get to their costumes…from me in 1982: 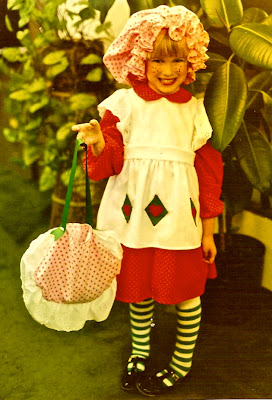 We will have more photos and stories to share by tomorrow night. I promise you they will not include me in the above 1982 costume which was handmade by my mom but our two little girls may have a similar look as I did 30 years ago.
Lastly, thank you so much for your kind and encouraging comments on the Love and Marriage Story I wrote this past Friday in honor of wedding anniversary. We had a lovely anniversary at home and I’ll share some recipes I made for our meal later this week.
Signing off this Sunday from the Hulkamania prairie! 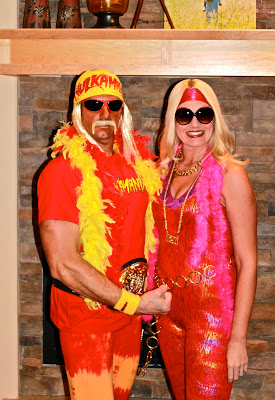