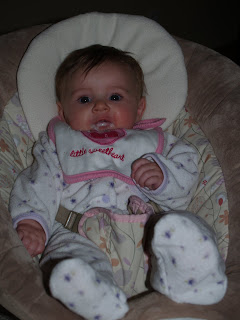 Just a few days ago I was bragging about Anika sleeping through the night. Scratch that. Anika woke up in the night at 12:12AM on Sunday night. I stared at the clock, confused and sleepy. I thought it was because she has outgrown our antique bassinet in our bedroom and could not move around enough in the bassinet. It was time to move her into her big girl crib, in her nursery down the hall. I could not do it on Monday night. And again she woke up in the night, twice. Ugh. She did not even do that as a newborn!
Finally on Tuesday night Nathan assured me she would be fine in her bedroom and she went to bed with out any problems at 8:30PM in her own crib, in her own room. The monitor was turned way up and I checked on her numerous time before I went to bed. Sleeping peacefully. But then at 1:07AM, she was babbling and shouting, not crying. I stumbled down the hall to get her and back to our room she came. I fed her and then again at 3AM. Bedtime rice cereal I decided would do the trick and get back into old routine ways of sleeping through the night.
So last night the big girl 4 month old had her first rice cereal. Hunter, Elizabeth and I cheered on Anika while Daddy gave her the rice cereal. She loved it. We all were eating fresh and hot homemade apple pie from our friend Sonia. It even had a better letter P for us on top of the pie. So yummy. Anika did not seem to mind missing out on the pie. Rice cereal was yummy for her. 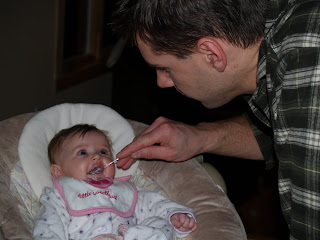 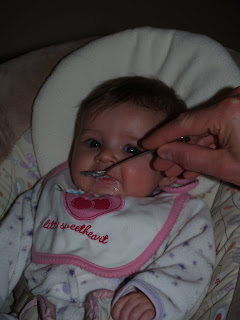 But guess what? The rice cereal trick did not work. Anika still woke up at 1AM. I did not feed her this time but went and gave her a nuk.She slept until 3AM. She then was hungry. And I am tired. More tired than I have been in months because she has been such a great sleeper! Let’s hope this is just a growth spurt phase and soon the sleeping from 8:30PM to 6AM will be back again shortly, preferably very soon. Tonight would
be ideal!