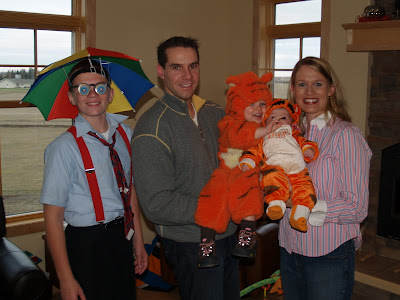 A rare family photo and a chaotic one at that…but always fun.
We had a Halloween Saturday night that included twin Tiggers and a nerd in our family. Hunter James was Tigger for three years, from ages 1-3. He wore the costume when it was too big, fit just right and too small. It was his favorite. It is a cozy costume for trick or treating on the prairie. Through our many moves, I saved the costume. And if my scanner was properly installed into my computer right now I would show how cute Hunter was as Tigger over a decade ago. But instead you get to see him as a nerd at age twelve and Miss E taking over the honor of the Tigger costume.
When Anika was a week old or so, I was shopping on Ebay…in the days when my mom would not let me do anything around the house, only to rest, recover and feed the baby. (Oh I miss the simplicity of those days just four short months ago.) I somehow got the idea in JULY to find Anika a matching Halloween costume. For $8.99 new with $19.99 Toys R Us tags on it, Anika got her own Tigger costume.
Hunter borrowed “nerd” glasses from Mama Jane and somehow non-nerdy Auntie Kirsti had the ultimate nerdy hat. She also came on Friday afternoon with a new pair of suspenders and her argyle socks. Hunter took his borrowed items combined with nerdy (too small) items from his closet and created a superb costume. 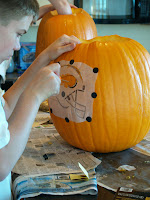 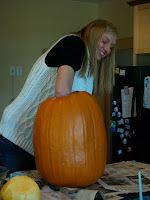 Auntie K oversaw the pumpkin carving. She has long arms that were needed to clean out our big pumpkins! Hunter used his Minnesota Vikings carving kit…another great Ebay find. 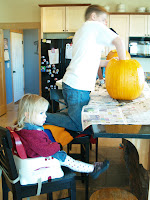 Much to her dismay, Elizabeth was a spectator to pumpkin carving. 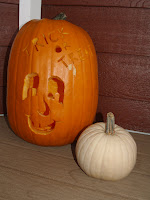 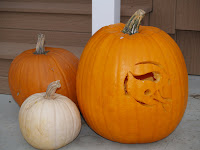 Finished products
Kirsti is graduating in a month with a load of college degrees and a couple minors. One of those majorsis in English. She is a talented writer and artist. But she struggles with spelling and always has. Spelling is one of the few subjects I did not struggle with. Mainly because it did not involve numbers or math of any form. So it is one of those areas of my little sister’s life I just love to tease her about…always.
Over the years, a few of us have received beautifully hand-detailed homemade cards from Kirsti proclaiming “Happy Bithday!”.  Carving words into a pumpkin puts Kirsti into dangerous waters. And I was secretly confident that she would not spell the words correctly into her pumpkin.
When Nathan went to light the the jack-o-lanterns, he studied K’s pumpkin to make sure she carved “Trick or Treat” correctly. She got it. The English major is paying off…at least in the pumpkin carving business.
And when I jokingly told her that Nathan noticed she had made a mistake, Kirsti looked horrified. And then relief came across her face as I laughed and smiled, reassuring her that not to worry, she got it right. Maybe next year she will venture out and carve HAPPY HALLOWEEN into a pumpkin.
Note that my children only get three triangles for eyes and a nose and a sphere of a smile when I carve a pumpkin. If I am really getting creative I might throw a tooth in there on the smile. Even if I can spell I certainly could not carve words into a pumpkin. Kirsti got Mama Jane’s artistic and creative skills. And I am…Fred’s daughter. I don’t even remember my dad ever even carving a pumpkin? 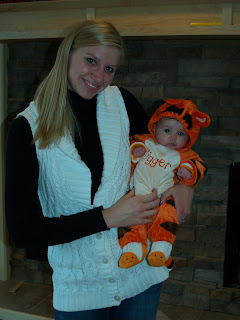 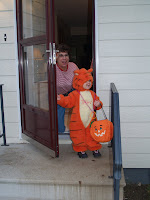 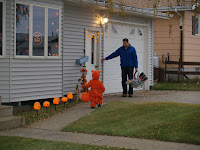 Nana had a bag of treats for Tigger Elizabeth who proudly showed off her “bounce bounce” as Tiggers do to everyone.
After coaching her on what to say when we would go to someone’s door, I said “Okay Elizabeth what do you say?”
She said, “Pleez guckr!” (please sucker)
Then she caught on and said “Tricker Teet!” and “Date u” (thank you) 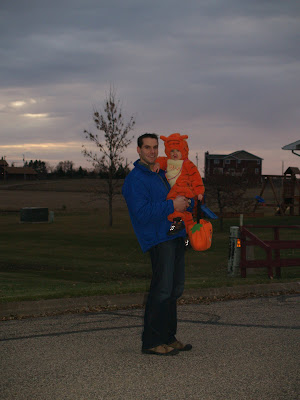 Just over E’s left shoulder you can see our house on the prairie.
Tigger Anika fell asleep and stayed in the Odyssey with me. Nerdy Hunter went off with his friends to scare one another in the park. Daddy and Tigger Elizabeth made a few rounds to neighborhood homes but after about half dozen visits she wanted to go to eat her “handy” (candy).
Later in the evening, Princess Kirsti who was dressed up and answering our door to a handful of kids, stayed with the girls for their bedtime. Nathan and I got our costumes on and went with some friends to our local community Halloween party which Hunter also attended with us until I (his too strict mother according to him) took him home at 10:15PM.
Nathan and I along with three other couples dressed up in an Oktoberfest theme. While this blog is often an open book to our life, I am 110% positive my husband would not be agreeable to me posting a picture of him in the lederhosen costume I bought him and he reluctantly wore. He is a German man though so he was quite authetic and looked like an original Robin Hood. He may admit to you that he thoroughly enjoyed our Halloween costumes and outing. Our group won the “Most Creative” prize for our costumes which we had little to do with as the other couples had actually practiced a German dance and are seasoned veterans at winning in past years. We skipped dance practice but still managed to have a grand time and definitely want to keep our winning streak alive with the group next year.