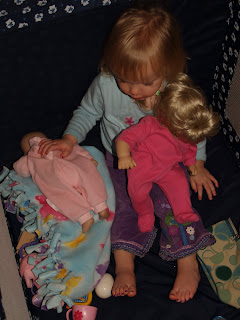 We have had what was Hunter’s former pack n’ play set up in our living room for over a year for Miss E to use. It is practically a piece of furniture for us now. Elizabeth can now crawl in and out of it like nothing though. It no longer serves its original purpose of keeping E in one place and safe while I had to start a load of laundry, take a shower or feed Anika. But she still loves her little space in the pack n’ play. She calls it “my pay pay”. E’s three favorite pretend play buddies are two babies and a plastic blow up alien (that Hunter bought with tickets from Space Aliens!). The alien is spooky and about Elizabeth’s size. She loves him and calls him “man”. 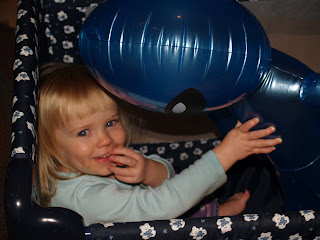 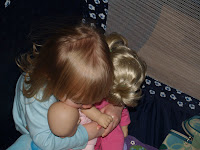 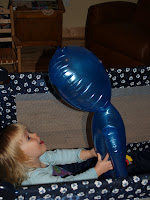 Last night she threw out her man and babies from the “pay pay”. Then ordered Hunter to get her out of there rather than climb out. He listened. She then proceeded to put each doll and the alien “man” on different chairs giving them each time outs, saying “You sit! No get up chair!” Hunter and I were both there laughing under our breath. On two occasions I have recently given Miss E herself two minute time outs and Daddy did once during playtime in the basement. I said “Elizabeth why do they have to have time outs?” She said “man naughty! My babies naughty!” She has learned the word “naughty” from her daycare provider Lori’s dog named Ozzy. Ozzy tends to be naughty sometimes. After E set her buddies in time out, she went off to play with other toys. The man is STILL in time out this morning in the living room on the chair. Poor guy.
Another funny moment came the other night from Hunter. I (the hardnosed mother) was trying to get Hunter to iron out some dynamics on his two piano festival pieces. He was not agreeable. Nathan came to talk him. I talked to him. He was still not agreeable. I strongly suggested he get out his Bible and find five Bible verses about being respectful to your parents and being disciplined…and have them memorized by Friday. This is straight from the book my dad could have written on disciplining me as a strong willed child. I learned from Fred! With help over the phone from Mama Jane, he found the verses he wanted to memorize. All are excellent reminders for him. The next night he was working on memorizing them in his room. I was reading to Elizabeth next door. He came in laughing into E’s room and said “Mom! I found my verse!” 1 Timothy 2:12. Hunter is NOT memorizing this verse. “I do not permit a woman to teach or have authority over a man; she must be silent.” AHH! That is not what I intended. Hunter read it to Nathan when he got home from a meeting. Nathan said “I think you took it out context Hunter. And that is not the verse you want to read to YOUR mother!”
But Hunter still thinks he is pretty funny. And actually we think he is too and truthfully we like that he is reading through the Bible. Period.