One of the greatest advantages to living in rural America is the chance to give our kids a simple country lifestyle. We live far from city lights and traffic jams. Kids have the opportunity to participate in numerous activities, and oftentimes no one is cut from the team. If you want to join, there’s a spot for you, whether it’s on a sports team, in a school play, with the choir or in a club.

I suppose I’m a little sentimental about our way of life as we creep closer to our oldest child’s high school graduation in six weeks. Come July, he will move to Grand Forks to attend the University of North Dakota and play football. Hunter is the type of kid who took full advantage of the rural school experience. This past weekend, he qualified to participate in the state speech contest, which is in a couple of weeks. This month, he’s also participating in the regional small group music contest, running in a couple track meets each week, attending the state National Honor Society conference, going to two proms and helping with his local FFA banquet all while taking a full class load and practicing for his last piano recital. If we lived in a bigger town, our kids wouldn’t be able to participate in this diverse lineup of activities as a high school student.

I snapped this on my phone when Nathan gave Anika on a pep talk in between matches in March, on his 40th birthday.

As a kindergartner, our youngest child, Anika, just completed her second season of local pee-wee wrestling. She was the only girl who participated in the sport in grades pre-k through sixth. If we were in a bigger town, Anika would have never considered wrestling because it wouldn’t have been in our circle of friends or offered through her school. She joined wrestling as a preschooler simply because it was offered and her two best boy buddies challenged her to try wrestling.

Anika wrestled in four tournaments and 13 matches this past winter and never faced another girl. Her weight class only included boys. She won more times than she lost. Compared to her first year of wrestling when she only won once and cried often, this was a big improvement. 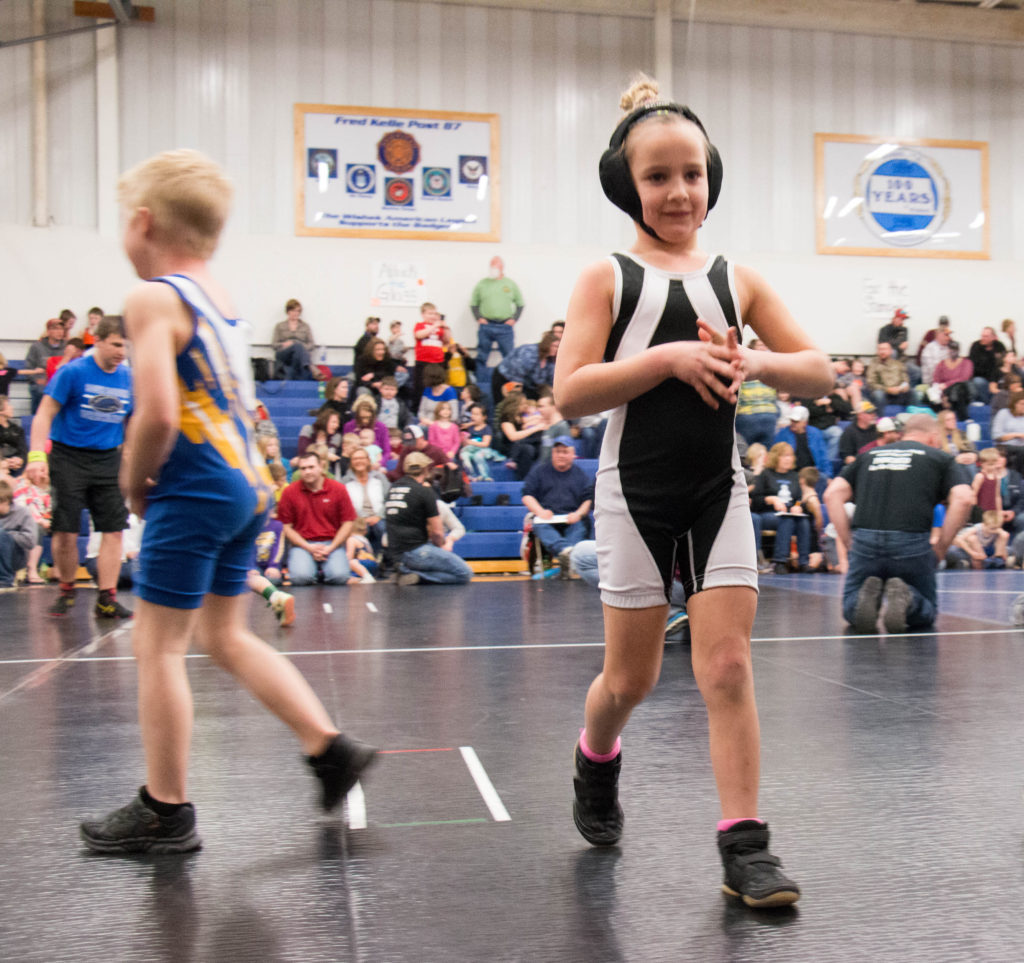 Our rural girl wrestler switched from her pink singlet this season to the black and white one like others. She wants to be a wrestler like other boys around her in our small town.

This season, Anika became a wrestler. She wasn’t a girl who wrestled, or a girl simply trying out wrestling, a predominantly male sport. Anika still had some teary moments, but overall, she was fierce. She switched from wearing her pink singlet to a black and white one just like the other boys from our small town wore. She wanted to be like everyone else.

Her gender, choice of sport or rural location doesn’t hinder Anika. Anika likes to compete—and she wants to win. She never was pinned, but when she lost a match based on points she was fired up and unhappy, partially because she doesn’t really understand technique, the rules or how to win but also because of her personality. What I see in Anika you can’t coach into a kid. She has a fire to succeed.

Will she wrestle for years to come? I don’t know, and I don’t care whether she does or not. Kids don’t need to specialize in a specific sport or extracurricular activity in rural areas. Kids get to choose their activities, learn to win and lose as a team and individual.

I got a text message from an Iowa farmer friend, Cristen of Food and Swine, telling me how she told her dad that my kids learn to bake, sew and wrestle, all while living in rural North Dakota. It’s true—among our three kids, with 12 years difference between the oldest and youngest, our kids can experience just about anything their hearts desire, including sewing, baking, wrestling, band, FFA or state speech. It takes support from devoted families, volunteers, coaches, schools and communities to make these opportunities possible for our next generation.

How will a variety of experiences shape the future for our kids? I hope they have the desire to live in rural towns, run small businesses or farms/ranches or work in agriculture in another capacity.

Anika came home from kindergarten this week with a paper that said, “When I grow up I want to be a pediatrician to help kids.”

“I thought you wanted to be a veterinarian?” I replied. She smiled and said, “It was already taken, and I couldn’t repeat. So I picked pediatrician. I can be one of those too.”

Yes, she can. A simple rural life gives our kids an array of choices, experiences, big opportunities and a future. It makes me a proud prairie mama.