When I was stuck in snow in South Dakota last weekend, in the storm that is now termed Storm Atlas, a woman named Pam from Florida charged her phone in my snow-covered car. She was not happy to have traveled with her tour group to not get to see Mt. Rushmore because of the government shutdown. The snow and Mother Nature, she understood. But the flashing lights and guards preventing her from seeing the monument ahead of the snow infuriated her. 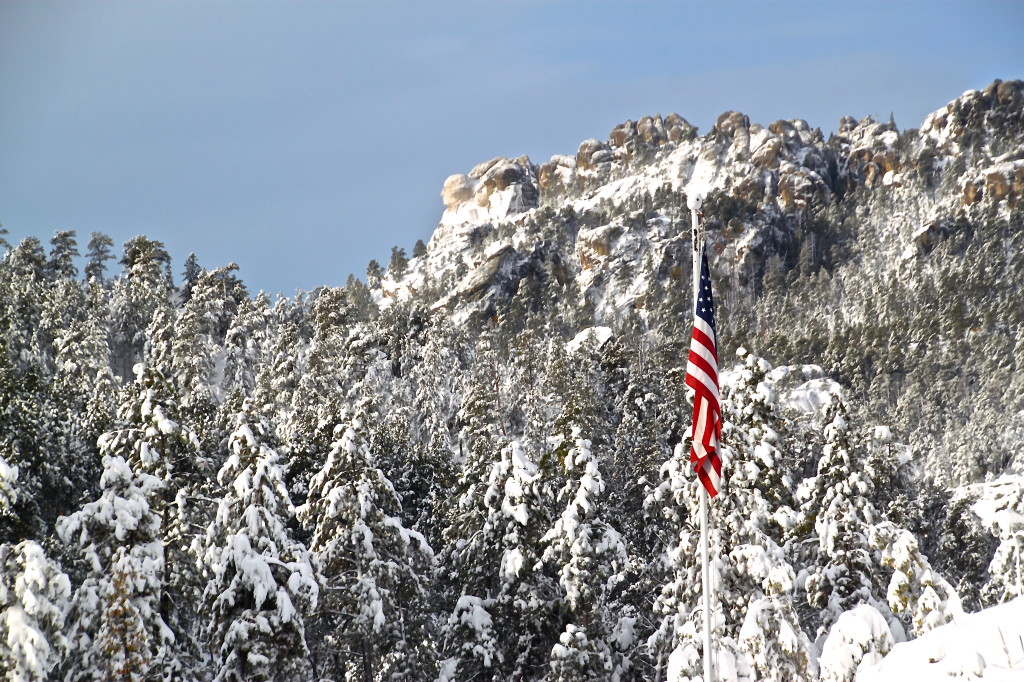 Pam’s words stuck with me as I stared out at George Washington at Mt. Rushmore, from our powerless Black Hills lodge. I thought long and hard how I could get there to take a picture since all government shutdown flashing lights and guards had retreated in the much larger than forecasted October blizzard. Pam said to me that the government was acting like we were suppose to throw a tarp over the monument and just forget about it. She said, “I’m not forgetting this. I will remember next time I vote for elected officials!” I am not forgetting either. That monument makes me intensely proud that the government can’t throw a tarp over it and couldn’t stop me from taking photos of it post-blizzard. Mt. Rushmore is a tribute, to our forefathers, great leaders that believed in our Constitution and freedoms. What I see captured in the photo is the American flag and President Washington boldly standing strong through a storm and government shutdown. It makes me continue on, fighting, striving and working for what it is right and just. What is right and just? To help the South Dakota ranch families that are in the midst of the greatest disaster they have faced. I spoke last week to the South Dakota Rural Women of Agriculture group, without power, during the blizzard in South Dakota, about finding their voice and sharing it. I need to take some of my own advice now.  The cattle lost are generations of ranch family’s legacy and livelihood. There are 60,000, possibly over 100,000 or more livestock now dead. The cattle and sheep were grazing still on summer pastures, not as close to home as they are in the winter and with less shelter than they have in the winter. They didn’t have their winter coats to protect them from the snow and wind. It is heartbreaking for families and particularly hard on young ranchers, who could easily be wiped out from this historic storm. It is nothing ranchers have experienced before so early in the fall and with such a great volume of snow and high winds. The ranchers haven’t sold their spring calves yet and the mama cows were pregnant. That’s three generations lost. There is no financial program that can replace the genetics and legacy that families have built through their beef herds. As my friend Jodene Shaw said in her blog post, there are many broken hearts and dreams on the western Dakota prairie.

Do you wonder why still so many livestock died in this storm? Read Understanding What Happened by the South Dakota State Extension Service. 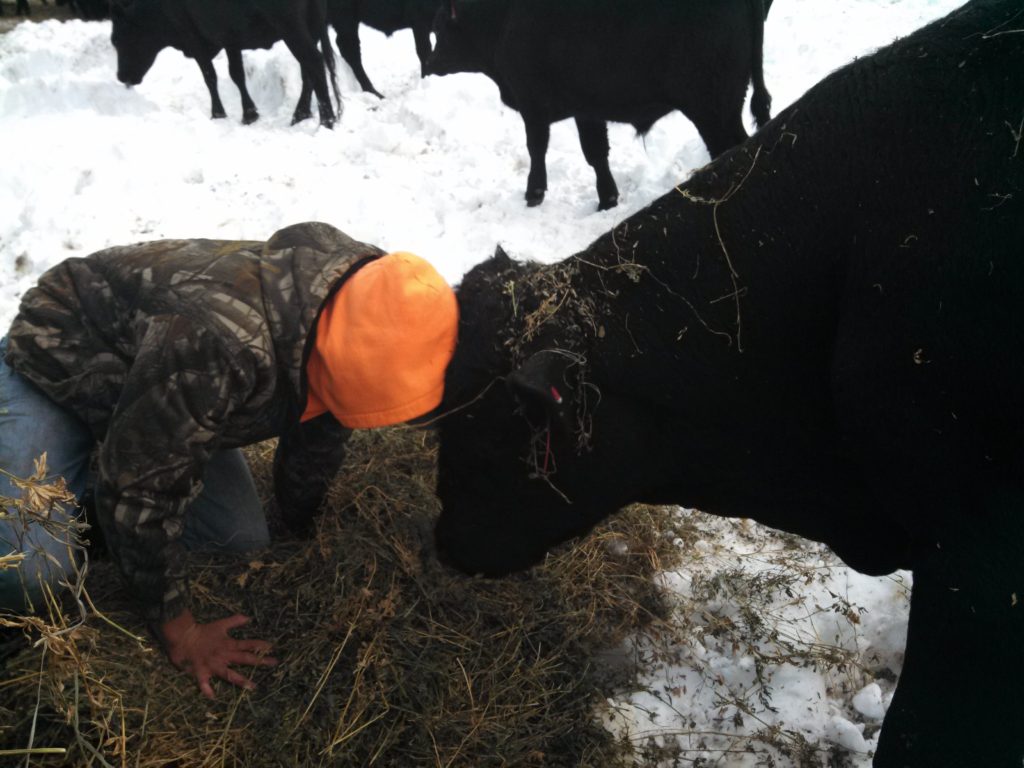 I am not a South Dakota rancher. But I was raised in a farm and ranch family a few hundred miles away from those families impacted. 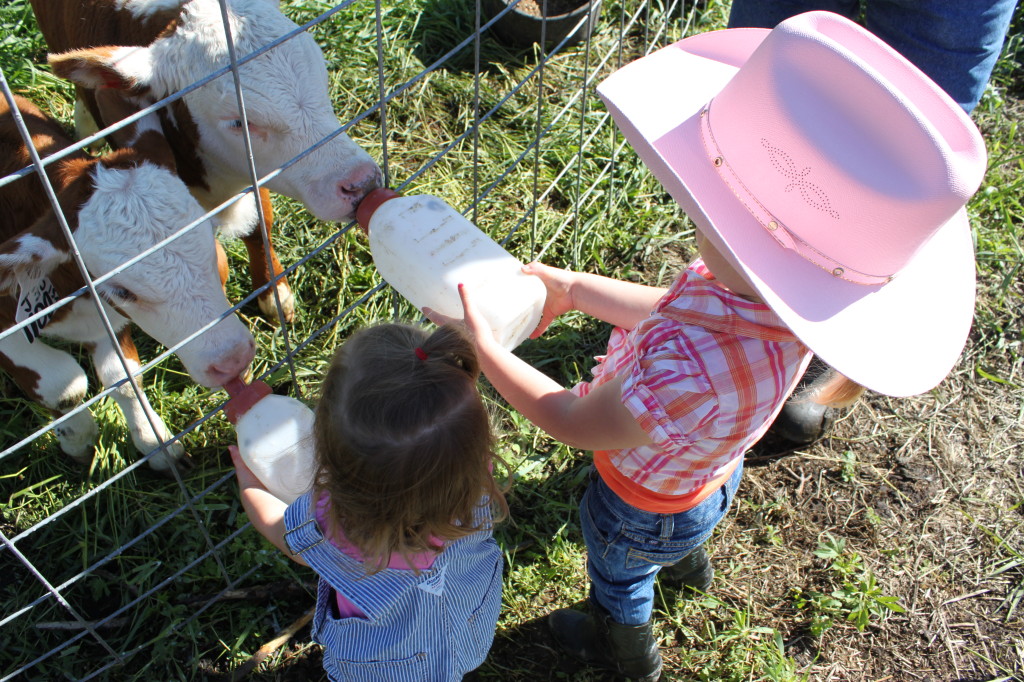 I was taught to do what you can, with what you have, where you are. We are teaching our children the same. My family and I are going to donate to the Rancher Relief Fund that goes directly to South Dakota Stockgrowers, Cattlemen and Sheep Growers. Even if the government gets around to providing disaster relief for these families, it is going to be a long time before help comes their way.  You can do the same. Together we can create needed media attention and donations that directly benefit the ranch families that have lost livestock from cattle to sheep to horses in this disaster. I am working with my friends at the AgChat Foundation who created a non-profit page for anyone to donate at here. All funds will go directly to the Rancher’s Relief Fund through the Black Hills Area Community Foundation. We want to share this as much as possible over the next three weeks to raise $500,000. It might not seem like a lot compared to the losses that ranch families are suffering. However, I believe it highlights what we as Americans can do, with what we have, where we are. We aren’t throwing a tarp over the disaster. We aren’t shutting down. We have resolve. We are resilient.  Please join me in rallying for ranchers, pray for these families and if you are able, please donate today.