I am honored to have my friend, Teresa, guest blogging about raising a family in the North Dakota oil boom today. This is the real life, real story of the impact of the oil boom on a family. The first story I shared was about Teresa, her husband, Weston and their four children in Life in the North Dakota Oil Boom: Ranching remains. My favorite quote Weston shared was: “I would rather have an American come to North Dakota for a job in this oil boom than be an American solider in the Middle East fighting for oil in a war and possibly losing their life for oil on foreign ground. That man or woman, instead of having to fight for oil overseas, can have a job here, make money and whether they choose to stay here or not, is up to them. They can make money and return to their home or they can make money and build a new life here.”

Now here are Teresa’s words on how she chose to make her life in North Dakota and is raising a family in the middle of the oil boom. 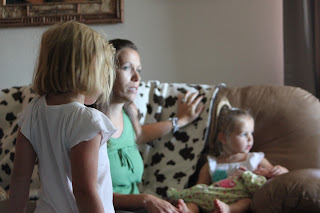 When I agreed to marry my then boyfriend 8 years ago I was working in the least populated county in North Dakota.  It has 2 towns, one of which is the smallest county seat in the nation.  The county’s population was somewhere around 760 people with just over 300 households in the county.  It is considered vacant by most standards in that it has less than 1 person per square mile.

It isn’t vacant.  I know.  I worked there after completing my graduate degree and met many of the people living there over the course of two years.  The people support each other and come together when it matters.  I learned much about the west river North Dakota way of life by working with the people of Slope County.

We don’t live in Slope County, but the west river North Dakota way was prominent in the county where we settled down to take over the ranch where my husband was raised.  This way of life was different than what I grew up with in central Wisconsin.  I learned to appreciate it. I was committed to this way of life.  I was committed to raising a family here.

The people are farmers and ranchers.
They believe in tradition.
They are solid.
People are friendly.
People help each other out.
People wave. 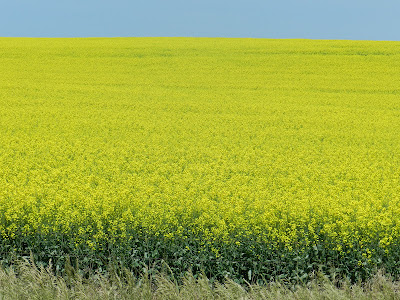 As the outsider coming into this community, everyone knew me, but I knew no one.  People stopped me in the grocery store to talk. I had no idea who they were.  Afterwards, I would call Weston to describe who I just talked to so he could tell me who they were.  It has taken me 7 years to learn them, but now I know them so well that I can tell you what type of vehicle most of the people in the area drive.
This was exactly the type of environment in which I thought I would be raising my children.
That is not the case anymore.
The normal we knew does not exist anymore.  On most days there are more out-of-state license plates at Wal-Mart than North Dakota plates.  My husband and I have struggled with the thought that our children’s “normal” will be so much different than what we expected when we got married just 7 years ago.
The development of the Bakken Formation began rearing its head about 4 years ago and much has changed.
My 2 year old yells out “oil well” while we are driving out to the fields.
Moving cattle and machinery can be hazardous now with the increased traffic on the country roads.
Oil field workers with no place to call home have been found parked and sleeping just a few hundred yards from our house.
We lock our doors and remove keys from the ignitions of vehicles due to the increase in thefts in the area.
On the 25 mile trip into town I used to meet the same 5 vehicles each morning.  Now you can hardly find a place to pass a vehicle or use your highbeam headlights at night.
And no one waves anymore.
And that is the real tragedy in all of this.  Much of the friendliness that made this place special is gone.  I don’t know most of the vehicles I meet anymore.
Note that earlier I didn’t say rearing its “ugly” head because not everything about this boom has been bad.  We have oil on some of our land. This will positively impact the future of our family ranch and our children’s futures greatly. 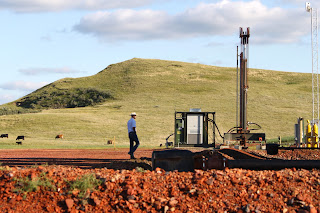 Although this isn’t the environment I thought my children would be growing up in, there are positives. And some things have not changed. 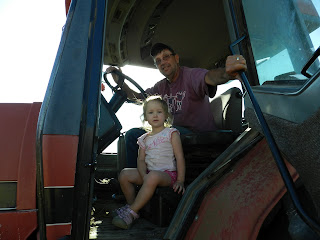 Our kids still get to farm and ranch right along side their dad and grandpa.  My 4 year old twins love to ride in whatever tractor or combine dad is driving.  All four of my children are in the suburban with me when we escort or move the guys and their machines from one field to the next.  We deal with a lot more traffic in those little jaunts and sometimes it is downright scary, but so it goes.

We know now what to expect from the influx of out-of-state workers and I must say that most have come to respect the ranchers that made their living here before them.

The oil industry has also brought in an influx of money into the area.  The schools have benefited from this and, therefore, my children will also.  The school is expanding.  Life has been breathed into many small businesses.  The oil companies try to give back to the community.  They sponsor events at the fair and purses in the local rodeo.  One company donates backpacks filled to the top with supplies to all of the children in the school.  My twins will be getting these backpacks when they start preschool in September.
No, this isn’t the environment we thought we would raise our children in.  My husband and I have made the conscious decision to look at the positive and move forward.  We show up at the county commissioners meeting to voice our opinions about what happens in our county.  We don’t just stand by the sidelines and complain.  Our children’s future is at stake. 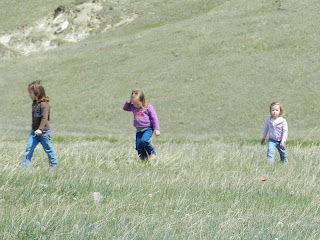 We still have wide open spaces, cattle roaming our pastures, crops growing in our fields.  Four beautiful children running wild, learning, growing and, hopefully, appreciating all that our life in agriculture has provided for them.  The view outside our window is now spotted with oil wells but that has not changed who we are. 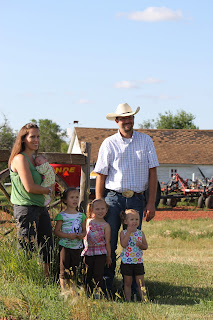 And while this is not the same lifestyle I thought I would be raising our family in 7 years ago.

We still are farmers and ranchers.

We still believe in tradition.

We help each other out.

And I may still even wave at you.

Thank you to Teresa and Weston for allowing me the opportunity to share their stories. I also highly recommend you listen to a radio interview from Consumer Ag Connection with Weston and Teresa.

Our way of life is changing in North Dakota. Our quality of life remains. Our economy is bringing a future to families. Our oil is giving freedom to Americans. I am grateful every day for freedom.