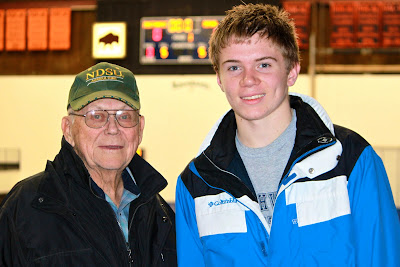 On Saturday night, Hunter played in a “big town”, 85 miles from our home in a local civic center. “Big” refers that they have Wal-Mart and a McDonald’s, which allowed me to eat my first McRib in 20 years and drink an egg nog shake. More important than pop culture that I sometimes miss on the prairie, there was a big game with our big family gathered to watch.

It’s was easy drive for us as there is no snow and the weather is unseasonably warm. My parents and brothers drove down from the farm, bringing along my Grandpa Sonny. Uncle Jim and Colton came to watch. Nathan’s parents, Eldon and Carol drove separately from us and also attended.

We were game ready and the girls were set to cheer on their big brother. Before the game started, my brother Joe excited for the game to start said “Let’s go!” and Miss E said, “Yes! Let’s go home!”
Games get long for the girls.

They kept themselves hydrated…. 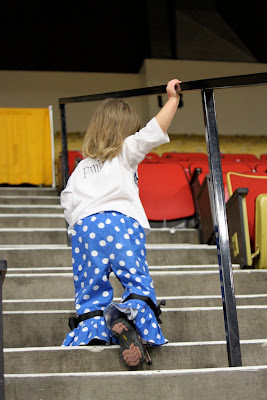 and entertained themselves by climbing the stairs in the civic center. Jim and Colton sat high in the bleachers so the girls had an end point to come visit. Nathan and I sat at the bottom of the bleachers for the other end point. 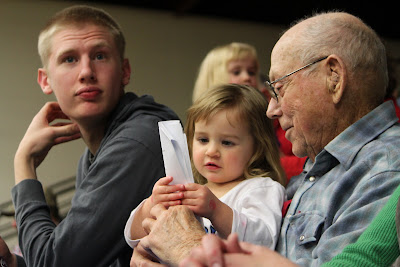 We had four generations of family sitting together. It hit me just ahead of the start of the game how unique and special it is for Hunter to have his 86 year old great-grandpa holding his 2 year old sister with generations in between all cheering for him. 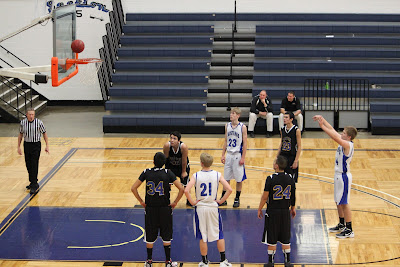 Hunter told me ahead of the game he was nervous to have so many family members there watching him and that he prayed he would have a “break out” game. (Note: all fans were sitting on the opposite side of the gym and it was large gym. Therefore it looks very empty on the above picture!) 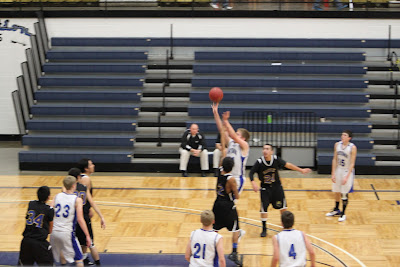 It was not a pretty game. It was a close game. Hunter did indeed have his “break out” game he had hoped and prayed for ahead of the game. He was aggressive and learned to play with some tough boys which led to an elbow to the mouth for Hunter. There was blood and a loose tooth. He has a history of hitting a wall with his teeth. He wasn’t wearing his mouth guard on Saturday night and now has promised he will in all practices and games. Nathan told him wearing his mouth guard is like wearing socks, you wear both every game. 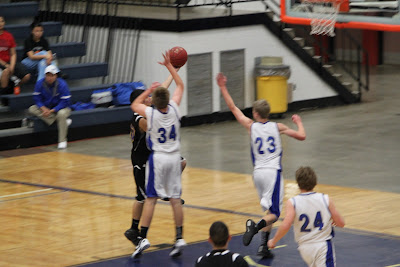 Our boys won by ONE point in a shoot out at the end of the game, 75-74. It came down our team’s senior guard making two clutch free throws at the end of the game. Another teammate, #23 in the photo above had 27 points. Hunter scored 25 points with 12 rebounds (which we didn’t learn until yesterday by reading the local newspaper). As Hunter said, “it doesn’t matter to me if we don’t win.” But he did have a pretty wide smile when he read the online newspaper box score.
He is learning the ropes. He makes mistakes. He is an 8th grader that needs leadership and mentorship. But on Saturday night with four generations of family cheering him on he rose to the occasion…alongside his teammates and coaches.
We were proud.