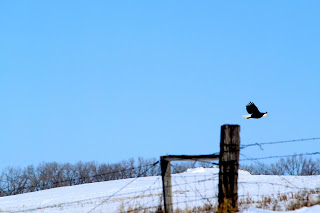 My sister, the kids and I were driving home from the farm on Sunday afternoon when sister Kirsti spotted a bald eagle in the ditch feeding on a carcass. I turned around to go back to see it, quickly grabbing for my camera.
A majority of these pictures were taken by my sister with the car window down to capture the moments with the bald eagles. 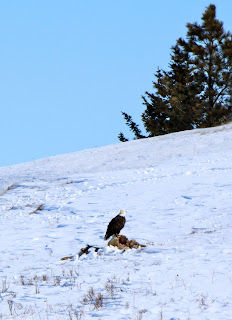 There were actually two bald eagles and they were feeding on deer that have not survived the winter. At our friends the Wagner’s farm, 500 deer have wintered in their hay, ruining it and scores have also died in it. It’s a common sight on the prairie right now. We need more of you to come and safely hunt in the fall to fill our deer license tags so this doesn’t happen in such large numbers.
My Ornothology-loving husband (the study of birds…I fully admit I did not know that term until I married him) told me bald eagles are not scavengers and that it was very rare to see them eating a dead animal like we did. But it clearly means the bald eagles are hungry in the winter that seems to never end on the prairie. 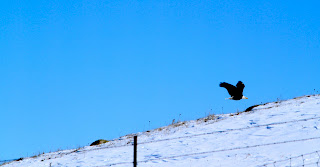 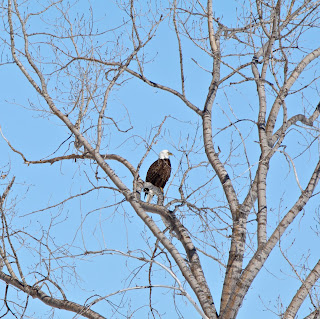 Regardless of the season or their feeding, the bald eagle’s majestic beauty captivated my sister and me. Miss A slept through it. Miss E wanted the window rolled up as she was cold and our teenager thought we had seen enough bald eagles for the day. 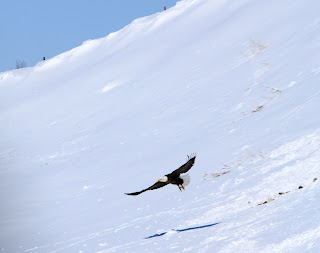 We continued our prairie drive, pointing out to the teenager that one advantage of a North Dakota Sunday drive is that you get to see beauty, even amidst March Spring snow, in wild life. This drive’s highlight particularly was the spectacular pair of bald eagles snacking on a Sunday afternoon.
What’s your favorite bird? I know there is a little Ornothology love in each of you.