When you live on the prairie, the closest professional teams are located hundreds of miles from your home. But anyone and everyone has their favorite teams.
For our family, it’s the Minnesota teams. Since we are in the heart of the NFL season, we are diehard Minnesota Vikings fan.
For Hunter’s entry into his teenage years on his August birthday, his gift from us was a November road trip to see the Minnesota Vikings. The tickets were a gift from my boss (much thanks RR) and I will post later this week on a few money saving travel tips that saved us hundreds of dollars on this road trip.
For now, we have game excitement to share with you.
Unless you were in a hole yesterday (or maybe just a deer stand on the prairie), you know what happened in the Vikings game. But if you weren’t there LIVE, here is your next best thing… 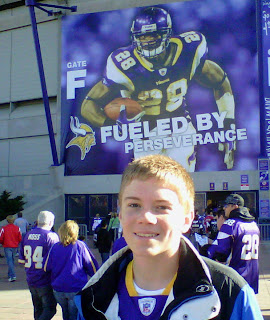 Millions of American boys grow up planning to play professional (American) football and our son is no different. He couldn’t hide his dimples from the excitement as we walked from our hotel to the game yesterday morning. NP and the girls didn’t go to the game and rather drove over to visit good friends and their kids. 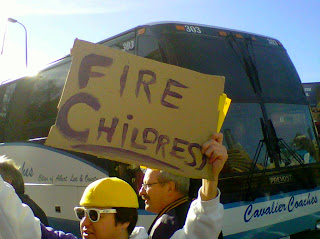 Hunter insisted on taking this picture with my phone. There is a major controversy brewing over the coaching situation for the Minnesota Vikings which added to the drama yesterday. 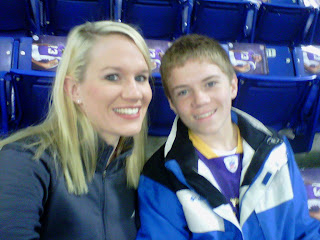 An hour and a half before kick off and we were in our seats. 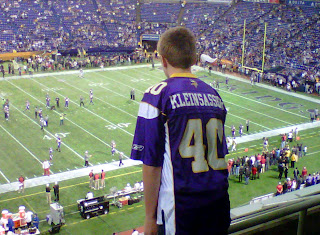 North Dakota’s own Jim Kleinsasser has played for the Vikings for the past twelve seasons. He grew up not far from our stomping grounds in a similar sized town as we live on the prairie. He was a standout athlete and farm boy who played college football at the University of North Dakota and then was drafted by the Vikings. Hunter has worn his jersey for years and Kleinsasser’s story and career gives hope to our  son’s big athletic dreams. I reassured Hunter that even if he doesn’t ever play professional sports and is instead an engineer or doctor, he always can be one of the Minnesota Vikings flag men who run onto the field after a touchdown as the crowd sings “Skol Vikings!”
He was not amused at my idea. 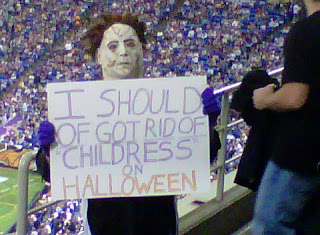 After three quarters of watching some of the most frustrating live football, the sell out crowd resorted to chanting “Fire Childress” with our son shouting it at the top of his lungs. I resisted as I felt a bit bad for the coach and was trying to save my voice as I (and our whole family) have been battling colds and sore throats.
40 year old quarterback, Brett Favre, passed for a tremendous 400 plus yard game and yet we were losing by two touchdowns in the fourth quarter. It was ugly.
Hunter wanted to leave with 12 minutes left in regulation of the game. 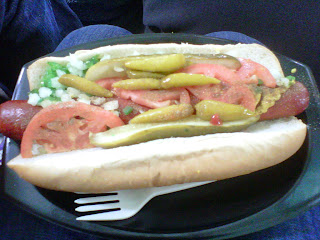 Rather than leave the game, I climbed through our row and went to buy him a loaded bratwurst to calm his angst and anger towards his beloved Vikings team. We drove 400 miles to get to the game. We were not leaving early I decided. Food is one of Hunter’s favorites things these days. He is always hungry but even the loaded brat didn’t bring much of a smile to his face. He did devour it though and it took his mind off the ugly football on the field for a couple minutes. 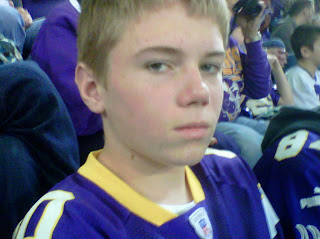 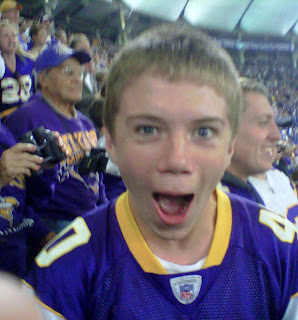 Suddenly there was a tremendous seven minutes of football to end the game and the mood…changed. 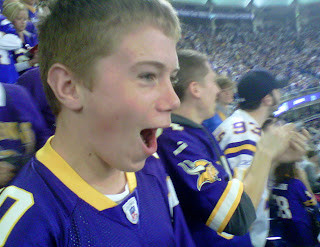 No more chanting against the coach and instead there was complete jubilation among the 64,000 Vikings fan. The game was tied with seconds left and went into overtime. 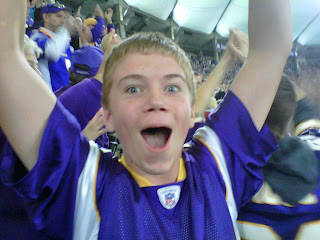 The Vikings won with a field goal in overtime. This memory will be forever imprinted in our minds. You could not have written a better ending for the quarterback, for the coach, for the team, for the fans and for our teenage loyal fan son.
Dreams come true.