Early this morning, I downloaded 84 pictures from my camera onto my computer. All the pictures were taken in a 48 hour timeframe this past weekend.
Keep in mind, this blog is our family scrapbook and I try to document our activities on here.
I am not the mom going to the Scrap N’ Stay weekend resort. I do not go to scrapbook parties.
Instead, I blog for our family, for our friends, for blog stalkers, for blogger followers, for blog friends.
So for the next few days, you all are going to get numerous posts from me all about our flurry of a weekend that involved tremendous fun with family and friends.
Chapter One: Hunter’s Basketball Wrap Up 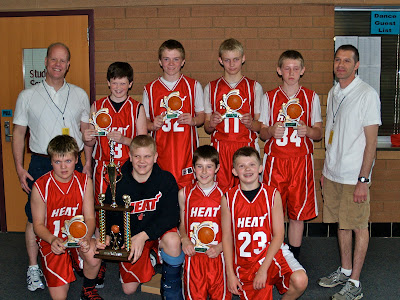 Hunter’s spring traveling basketball team, the Red River Heat played in their final tournament together. If  your team won this tournament you qualify for the national tournament in Indianapolis later this summer.
The tournament was held in Savage, MN, a suburb of Minneapolis. It was our second weekend in a row to the Twin Cities…a 400+ mile one way drive from our home on the prairie and Hunter’s fourth tournament in the past six weeks in the Minneapolis area. 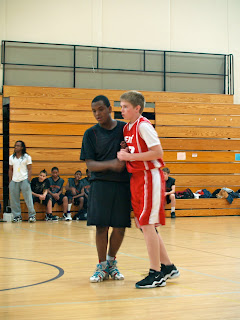 Part of the experience of playing in these tournaments is Hunter is exposed an array of players and teams. The competition level is high. These are teams that have extensive try-outs. Some are basketball clubs and others are “elite” teams. For a boy from a town of a 1,000 people, a county of 3,000 people and a state of 640,000 people, this is the basketball big time.
The first game the Heat won by 34 points. It was one of Hunter’s best all-around games. The second game was a disappointment. They lost by 12 points to a team from Wisconsin they probably should have beat. It was a life lesson in losing for Hunter and all of his team.
Disappointment filled his face in the below picture but as you can see he had a loyal fan club. 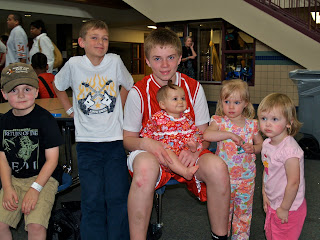 Luke, Noah and Ellie (and their parents, our dear friends Nancy & Casey) came from their new home in Iowa City to visit us, play in the water park at our hotel, finally have a chance to meet their Goddaughter Anika and watch Hunter play. 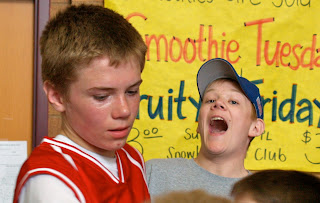 Hunter’s loyal fan, friend and cousin Logan, the self-appointed Heat team mascot as he told me got up early Sunday morning to come with his mom, Theresa to Hunter’s games. Logan had just finished a baseball tournament on Saturday night, hit his first hit of the season…a HOME RUN and could have easily slept in Sunday morning. But instead Theresa and Logan make the drive over from their home to watch Hunter’s two Sunday morning games, at 8AM and 10:20AM. 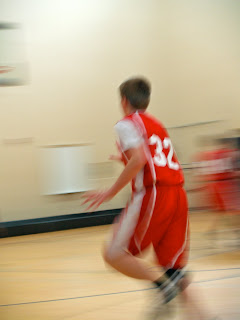 After the disappointment of Saturday’s loss, the Heat came back from being down 12-1 in the 8AM game Sunday to win by 15 points. That win led them to the 3rd place game where they played hard with great focus and intensity to beat the two-time defending youth state champion by 4 points to win 3rd place in the 12 and under boys division. 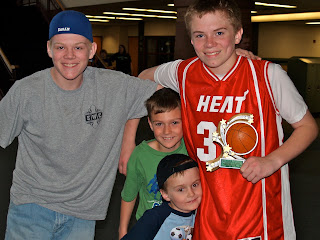 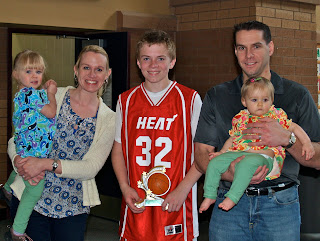 Traveling basketball has dramatically improved Hunter’s skills and game. The lessons it has given him in discipline, motivation, competition, work ethic, intensity and passion will stick with him for lifetime.
Nathan and I knew when we moved to the prairie we would be committed to allowing our children to have opportunities like Hunter has had through traveling basketball despite the fact geographically we are now limited to these opportunities. The road trips are long. Winning is fun. Losing is a lesson. The friends and family we get to see along the way make the road trips even more rewarding.
This tournament wraps up Hunter’s basketball playing for a few months other than a camp or two he might attend this summer. He is transitioning into “baseball mode” now as summer season begins in two weeks!