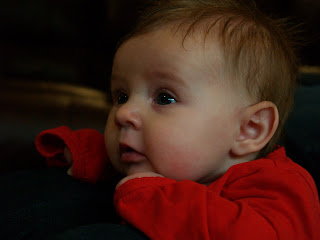 On Sunday afternoon we were able to visit our friends, the Olson’s. Our focus was watching the Minnesota Vikings as well as visiting and playing. Even Anika got into watching the Viking’s sieve defense in the fourth quarter but thankfully the Raven’s kicker missed the field goal. The Vikings are still undefeated. 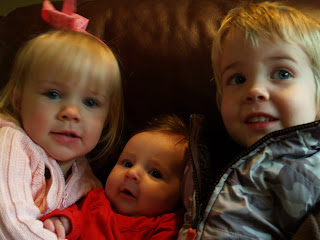 Elizabeth, Anika and Kaden
Kaden’s brother Noah (age 4) was somehow left off the pictures but enjoyed some baseball playing in the backyard after the game with Hunter. He also told his parents he wouldn’t mind having “six baby sisters”. I think Hunter would tell him two baby sisters is probably enough. 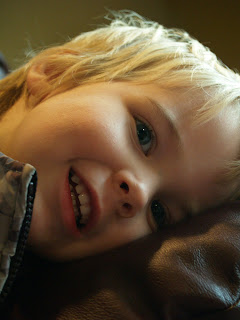 Kaden will be three years old in just six days. He was born two days before our wedding. And his mama Karla and he were still in the hospital just across the street from our church on our wedding day! 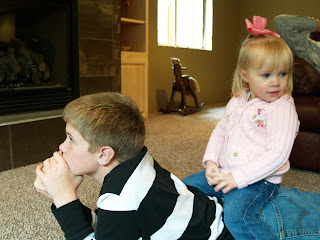 Elizabeth found a great seat on her brother’s back to watch the game…in the newly finished basement at the Olson home. 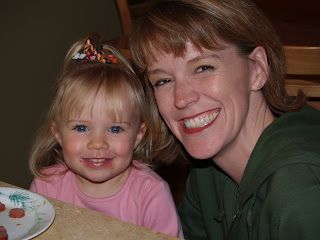 On Saturday night when we attended Nathan’s band reunion concert, the girls had a play date at “Bef’s howse” as E said, also known as the Oien family. Hunter and Christian have been friends since kindergarten and Beth has pretty much been my adopted big sister since that time. We used to see each other every day before we moved to the prairie. Now our visits are a few times a year but play time at Beth’s house is always fun. Especially when she makes HOT DOGS for Elizabeth. And first grader Parker has a collection of Elmo toys he saves for E to play with so really what can be better than that? At our boring house we have neither so playtime at the Oien’s was a huge hit for Miss E this weekend. Anika also did great but I actually cannot think of a time she has not been super baby. Hunter also had play time with the three boys on Friday night. He had a sleep over and movie night.
Good friends are the best.