This week I was not as organized in the blog department and am behind on my posting! The balancing act of family and work life is good but requires organization and…sleep. So rather than spend late nights to blog, I went to bed! Tonight though is Friday night…a good late night to blog.
Hunter had no school Thursday and Friday for teacher’s convention. Late Wednesday, the kids and I roadtripped north to my family farm, leaving Nathan home alone to work too much (and there is a rumor he may finish a house project or two). I then drove early Thursday morning to my Fargo office for meetings while the kids had play day on the farm. 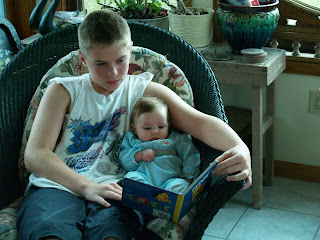 Hunter’s reading to Anika was so restful it put her sleep! 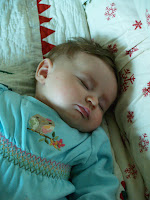 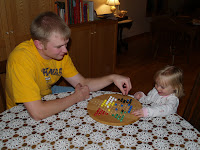 Last night, E talked Uncle Robbie into “payin dames” (playing games) and she played her version of Chinese Checkers with him. 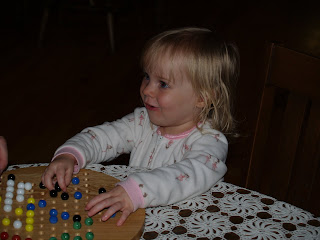 Tonight we arrived back to the farm from an (exhausting) photo session with all three kids. I scheduled the late afternoon appointment ahead of time knowing we would be here this weekend. It was Anika’s late 3 month pictures, Elizabeth’s early 2 year old pictures and all three kids portrait for our Christmas card. Easier said than done but the photographers, Ron and Toni Jacobson are people we trust to capture those priceless expressions and create beautiful, classic photographs. They actually took my pictures as a child and our wedding pictures. Even after a photo shoot where I felt like I was constantly chasing down Elizabeth to keep her in the studio, bribing her with fruit snacks, dancing around with any exciting prop I could grab including a huge stuffed Nemo and a life sized Elmo to try to get Anika and Elizabeth to smile at the same time while quickly wiping up Anika’s spit up…Ron captured all the expressions, smiles and dimples of our kids. Hunter is a seasoned professional and just smiled the entire time, while hiccuping from laughing so hard. Anika smiled much more AFTER the photo taking session was over and Elizabeth was…Busy Bits. Together they make quite a crew and it will be fun to have a few memories hanging on our walls for years to come to remember this day of picture taking at Jacobson’s.
Much to the excitement of Elizabeth this evening, Auntie Kirsti and Uncle Joe arrived at the farm also and joined in on the fun at the farm. 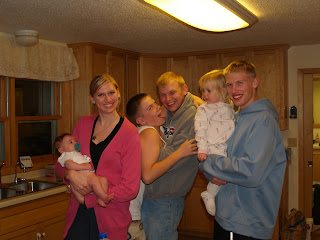 The girls were being held and Robbie made sure Hunter was not left out and tried to hold him. 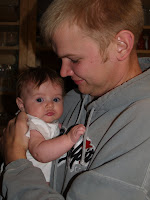 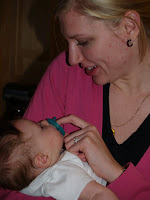