I opened an email today from Hunter’s teacher and a smile spread across my face. The email said “Found the boys’ fort when we picked up garbage today. Had to take a picture!”
Hunter is in the shadow of branches in the back wearing the brown sweat shirt. It does not look like they boys are doing much garbage pick up…actually they might have been hiding from it. Or maybe Mrs. C had them crawl in the fort for the picture… 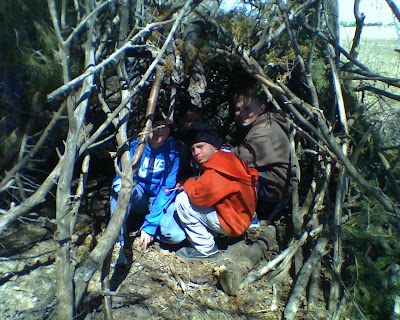 The picture made me smile for so many reasons. Spring leads to fort building again and no more snow forts. Hooray! Instead the boys build tree forts! It also reminds me that as much as these boys try to “big” they still are young boys who love playing spy and war games while hiding in and around their forts. No video games, computers, television, instant messaging, text messaging, facebook or twitter. Just good ol’ fort building.