Doesn’t Elizabeth look like a real toddler in this pic? Cheese in hand, sweater misbuttoned and she was only sitting still in her brother’s lap for less than 30 seconds to eat. Hunter still has the infamous wire holding his teeth together from his accident last week. We’ll learn tomorrow from the dentist what are the next steps and most importantly to Hunter if he can play sports again this weekend. 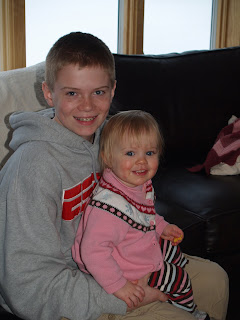 A few years ago I was in Nashville for a meeting and it snowed about an inch or two of wet snow. On my way to the airport that morning the streets were dead. No cars were out and no one else was on my shuttle. It was a ghost town. There was no snow on the roads and the little snow on the ground was melting. It had not been enough to even cover the grass. I commented to my airport shuttle driver on how quiet everything was and he said the whole city was shut down due to the “total white out conditions”. I burst out laughing and then realized he was serious. Since then Nathan and I always use that term “total white out conditions” in our best Southern drawls during a blizzard in ND. The storm that hit this week was enough to shut down the state of North Dakota from the south central portion to the northeast corner. You can see out the window in the above picture of the kids that we have NO blinds or curtains on our windows and all you see is white. That was taken yesterday in the late afternoon. What we woke up to is… 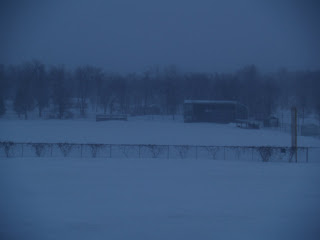 Snow…and wind…I try to imagine baseball games being played in the field to the north of our house…just a few more months and it will be SUMMER. 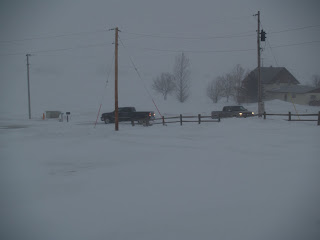 I had some early morning entertainment out the window watching Nathan pulling out our neighbors in their four wheel drive pick up so stuck in their driveway they could not move. They have an old tractor that snow blows our driveway frequently. Neighbors looking out for neighbors. 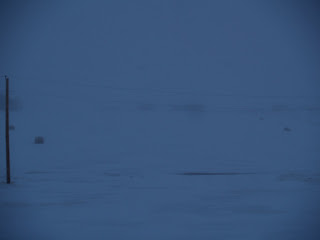 Off the distance across the hay field we still could see a friend’s house…we use this as a measure of visibility…barely we could still see the outline of the house. 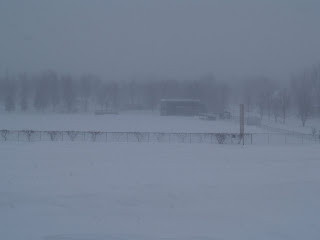 And then within an hour we had “total whiteout conditions”. The snowbanks were drifting to the top of Nathan’s hood of his pick up. And my car did not leave the garage. It couldn’t have made it through the drift in front of the garage anyway. 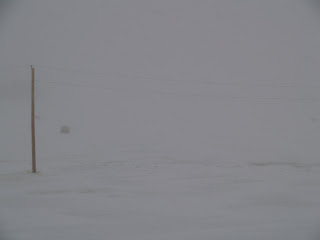 Of course due to the nature of our hearty prairie German Russian heritage people, our town did not shut down…
The school buses had not gone out the afternoon before and “country kids” as Hunter calls them stayed at their storm homes. (He forgets all of the kids here are country kids and we are all country folk…what qualifies us is living 80 miles from a Wal-Mart, McDonald’s or Starbucks!)
When kids stay at storm homes, there will school the next day because “town folk” can make it to school by plowing through snowbanks on the local streets. Seriously. So yesterday morning on regional radio stations we heard every town and city didn’t have school, no senior meals, no daycare, the interstates are closed and shut down from the north to south–Canadian border to the South Dakota border and beyond and from west to east from Jamestown well into Minnesota. And then it was repeated that the only school having school is…indeed our hearty town because we are such forward thinkers to keep the buses in so everyone can get to school.

Last night we experienced sheer joy, excitement, thrill and mayhem at our house. Amongst the wind and snow, we all had a fun supper of homemade pizza, quickly cleaned up the kitchen and turned on ESPN 2 to watch the North Dakota State Bison play for the Summit League championship. Our friends Saul and Nicki and kids Jordan and Charlie and their connection to the Bison outweigh our family loyalty to the UND Fighting Sioux. Plus the Sioux aren’t eligible yet in their transition to D-I to play for a NCAA tournament automatic berth. But the Bison are. And Saul is the head coach. Hunter has gone camps each summer at NDSU. When Hunter was a kindergarten I remember Saul saying to me “Kate I know Hunter has a grandpa that was a star up north at UND but that boy plays basketball like a linebacker”…as we looked out onto the court and Hunter was literally tackling a poor six year old boy for the ball. Nicki has been a dear friend to me and we were ready to cheer on the Bison last night.

If you didn’t see the game, turn on ESPN today and watch the highlights. The Bison won on a last second shot. Hunter shrieking and running through the house with his heavy feet shook the china in the dining room. Indeed, the Bison are going to the BIG DANCE of the NCAA basketball tournament in their first year of eligibility as a Division I school. The press will talk about it as a tremendous accomplishment for team, program, university…the list is long. But if you are from North Dakota, you have loyalty to one school or another, NDSU or UND. Not both. However last night, North Dakotans (there are only 640,000 of us TOTAL) could put the allegiance aside of be proud of our state. And as a lifelong basketball fan/junkie (Nathan is sure there is not a family that talks of basketball more than my family), it is very exciting. We are most thrilled for the Phillips family. This win will catapult Saul’s coaching career and change their family life for a long time. It is a joy to see good, honest people be successful and WIN.

I will post later the homemade t-shirt Hunter got up early today to make. I heard him say as I was walking down the hall to his room this morning….”Mom I hope you’re not mad at me!” What a morning greeting. There he was standing in his towel, fresh from the shower, using a green marker on a white t-shirt writing BISON 23. Then we had to search for a yellow permanent marker to outline the letters and numbers on the front and back of the shirt. When I asked “Hunter don’t you just wear a Bison basketball camp t-shirt?” Hunter responded in an raised excited tone “MOM the Bison WON and are going to the big dance. I dreamt about basketball all night long. My basketball camp t-shirts are from 2007 and 2008, NOT 2009.” Of course why 11 year old boy logic. Homemade t-shirts are so much more authentic.