While we all go through the motions of life at times, it is good to be reminded of our influence. We can all positively influence others, even when we might not know it.

This week, while attending an Agchat training conference in Charlotte, North Carolina, a young man walked up to me during the ice-breaker session. I assumed he was simply going to introduce himself but instead he more to share. He said, “Katie, I’m Jacob Dickey (sticking out his hand to shake mine.) I just wanted to thank you for pushing me into social media at the 2011 National FFA Convention training you did. Because I’m here now. And I want to be an ag teacher.” 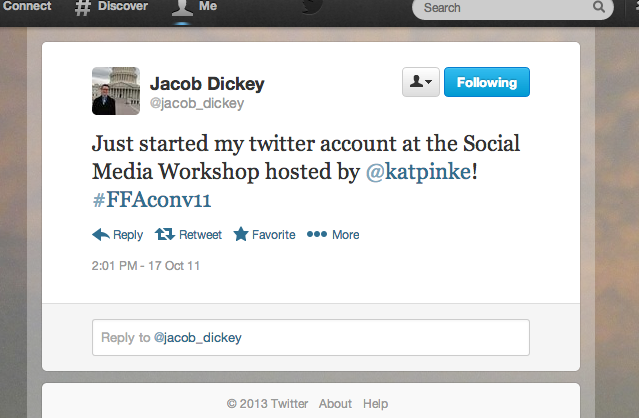 Jacob sent me his first tweet as a memory.

I’m not a quiet woman. I almost cried tears of joy at Jacob’s introduction but instead shrieked with excitement. He later sent me a copy of his first ever tweet, from Twitter, in the social media training session at the 2011 National FFA Social Media Workshop I was a part of with a previous client and team. That day remains one of my favorites in my career as the room was filled with up and coming leaders from across the country and it was the first social media training FFA had held at the National Convention. Since that time my career has been a winding road with plenty of more social media training sessions, speaking about finding your voice and strategizing on marketing communications campaigns and grass-roots efforts. My work has paid bills, broaden my network, empowered and encouraged me.

But what do I care about the most in my everyday career work? Influencing for a tiny moment people like Jacob matters to me. He is a part of my personal passion for agriculture. People like Jacob are a driving force why I wanted to go out on my own in consulting and speaking work to have more time to commit to my personal passions. Now I do that and I sometimes need to reflect on it.

There was nothing overly special I said that day in 2011. One hundred other speakers or consultants could have done the same that I did. But that day, Jacob was influenced to engage. That is the most important, engaging for your passions.

Engaging matters because it creates a force within you to work for your passions. First, Jacob listened. He engaged. Then he went out to tell his own stories. He is empowering others around him. He is active on his college campus in organizations. He has had internships and now sees his future as an educator. And one that I love dearly and that we need more of, an agricultural education teacher.

Jacob has kept growing to do more for his passions. When he said, “Because I’m here now…” he was attending the AgChat training conference with other selected agriculture advocates to expand his network, grow in his knowledge, expertise and continue to positively influence through his work now while also being able to accomplish his future goals.

While Jacob told me I influenced him two years ago, Jacob influenced me this week and I thank him for that. He reminded me that everyday you can make a difference for good in a smallest of ways. Even when you might never be reminded or know of your influence, your voice matters.

What matters most in who and how you influence others?