First, thank you for your kind comments this week about my new working mom adventure. Transition is exciting and tough at the same time. I have been encouraged and delighted by your thoughtful comments and emails. Thank you to each and everyone of you. Now onto regularly scheduled blogging…it’s Christmas after all. Let’s talk Santa and holiday party recipes! 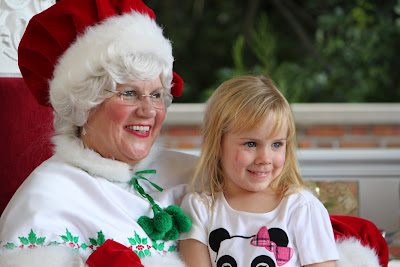 One afternoon when we were in Epcot at Disney World a couple weeks ago, Miss A was sleeping in the stroller and Miss E was awake. We looked over and there was Santa and Mrs. Claus with only THREE people in line. Here’s a Disney tip: go in early December. The lines are short and it’s amazingly decorated and beautiful.
I kept the photos unedited for you to see Miss E’s scratch on her face. That is a direct result of her sister. Miss A is an aggressive 2 year old. She’s been on Santa’s “naughty” list I’m sure several times this year. Last night Miss E threaten Miss A that Santa was going to bring her coal! But I have a feeling the sweetness is going to ooze out of Miss A now because she does not want coal.

She still has her sweet and sincere qualities and I’m sure Santa will be understanding to have our 2 year old on the “nice” list. 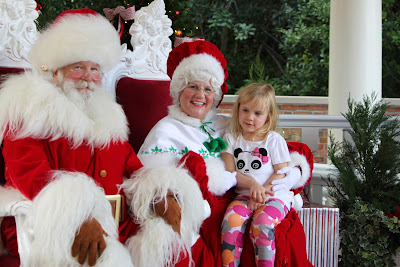 As much as she believes and loves Santa, Miss E wasn’t so sure of him when she met him in Disney World. She gave him a Mickey Mouse sticker but didn’t want to sit on his lap. She snuggled right in with Mrs. Claus and sweetly told each of them she wanted a “kitty” for Christmas. Miss A wants a puppy. They combined also want bunnies and a guinea pig. Santa told us baby animals aren’t known to thrive in North Dakota winters and that Spring might be a better time of year for the girls to get their plethora of new animals. But hopefully Santa doesn’t let us down completely and brings a few (non-animal) surprises.

Speaking of surprises, my husband and I can’t ever keep surprises from each other. Ever. We decided this year to not exchange gifts. We’d like to get some new bedroom furniture. There is only so much money to go around so it seemed logical. But then yesterday I received an email… 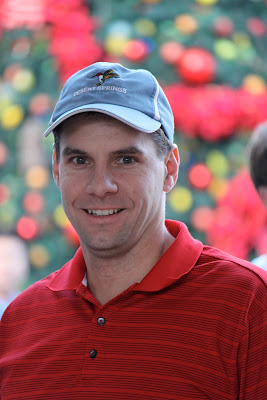 from my dear husband with an image of a pair of shoes he’d like for his birthday…which is in March…or if I changed my mind about no exchanging gifts between the two of us at Christmas, I could get them for him. We could just do small gifts, he suggested. It’s a pair of shoes. Not a boat. Or a snowmobile. I suppose I can splurge for the man of my life who is certainly on the “nice” list this year.

This weekend we are hosting a Christmas Cheer party for my husband and father-in-law’s contractors and top customers of the past year in our lumberyard business.

A few things on the menu include: 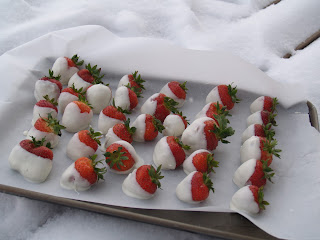 We’ll be having strawberries dipped in chocolate. 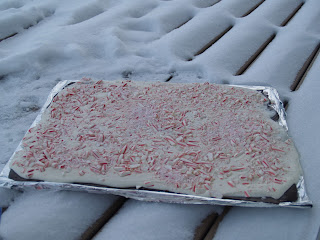 Peppermint bark. Yes I use my deck as a refrigerator. You’re jealous? 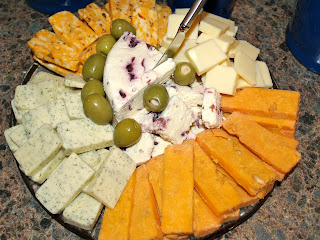 A wide variety of cheeses. 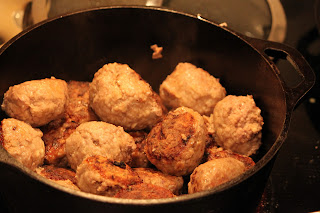 And of course, meat balls! Because what’s a holiday party with out meatballs? I’ll also have two of my favorite foods: shrimp and smoked salmon. Did I mention I just completed my 12th week in row of working out with a personal trainer? I need to keep working out through Christmas with the eating I’m planning.
Next week I am going to share a few new recipes that I will be making tonight and tomorrow for Sunday’s Christmas Cheer party. Monday’s Hunk of Meat Monday will include these meatballs…that were a big hit for a family meal this week complete with garlic cheese mashed potatoes and plenty of green veggies on the side. 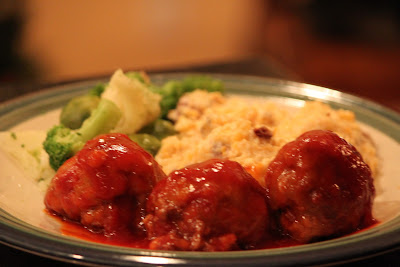 What’s on your holiday menu?