With the onset of his teenage years, we’ve been trying to teach our son the value of money. Nathan and I both had the bar set high with our parents being fiscally responsible and teaching us strong lessons. Despite strong lessons, both of us floundered in our financial independence at times, especially in our 20’s. Thankfully we managed to pull ourselves together in our 30’s. I read Dave Ramsey’s Total Money Makeover on a beach in Mexico during our honeymoon. Romantic. We still aren’t perfect but we’ve learned money management lessons that we are trying to pass down to our son now. If he can learn lessons from our mistakes and not make them himself it would be a “win” in my handbook of parenting.
So how are we doing in year one of cash lessons with the teenager? 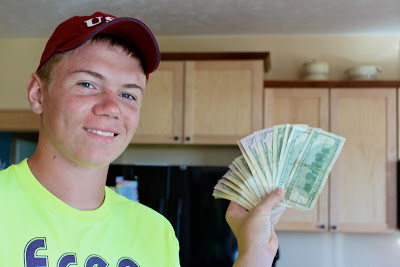 First, Hunter has learned to work to earn money. He clocks in at our family business on a time card and is paid an hourly wage, with a monthly paycheck. He does physically labor and is getting stronger from it. He is surrounded by strong examples of people who work hard.
Secondly, Hunter has learned the value of a dollar. He had to put two paychecks toward the basketball hoop he wanted and hasn’t had money to buy the X-box 360 he originally thought he “needed”.
Thirdly, Hunter has learned to save. 10% of each paycheck goes to church or charity. 20% of each paycheck goes to savings. Then he gets some spending money to reward his work or save for something he specifically wants to purchase that we wouldn’t normally buy for him (like an X-box 360). At least I told him that was the money lesson theory. But instead he said, “you can just save it all, Mom.” He will make a financial contribution to church or a charity but he is learning saving cash is quite important. He likes the flexibility it brings and options.
This Thankful Thursday, I am grateful and thankful for cash lessons for our teenager who hopefully by learning young will prevent him from financial plunders in his future. I’ll cross my fingers and pray on that one too.
And for those waiting to hear Hunter’s baseball results: They lost last night and the season ended. However, they went into the tournament as the #7 seed and earned 3rd place in the league tournament. A success. Less than two weeks from now, football season starts. Football? I can hardly believe it. Where is the summer going?
What are you thankful for today?


I’m flying from the prairie to the west coast for a business meeting and back again on a red-eye flight. With no sleep in between, I’ll also be thankful for safe travels and my bed when this trip is complete.

Previous Post: « Wordless Wednesday Linky: Back where I come from…
Next Post: Hunk of Meat Monday: Pitchfork Steak Fondue »