I spent a long weekend reconnecting with longtime friends alongside my teenage son. Flying home today made me think about how we stay connected has changed through social media. 1 hour of every 3 hours Americans spend online is on Facebook and a majority of Americans are on Facebook. What does that mean for face to face relationships? Has Facebook replaced our face to face time? The friends I visited this weekend were made long before Facebook, blogging, texting and cell phones. These relationships were created when my dad had a bag phone in his car bigger than my purse and I received my first ever email address from the University of Georgia. The relationships were built around friendship, common interests, mutual respect, shared experiences, laughter and fun.
I didn’t blog or turn on my computer for the past few days. (Hang with me for a long blog post to catch up.)
Many of the friends I saw this past weekend in Athens, Georgia are my “Facebook friends”.  But what I really took away is that Facebook is a great way to share a few photos, daily life moments and stay connected. But Facebook loses out to face to face time. Relationships are still about people, sharing common passions, loves and truly caring about other individuals. We need to connect in person to truly stay connected. 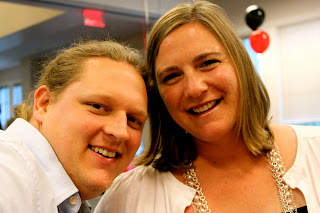 My college roommate, also named Katie…and her husband, Randy, picked up the teenager, Hunter, and I at the airport on Thursday. Hunter and Randy sat and listened to Katie and I start telling stories and laughing until we cried just minutes from the airport. Hunter realized he was in for a “fun” weekend.
One “purpose” of the trip was to attend to the SEC track and field championships in Athens, GA. It was actually just an excuse for a reunion of friends. We all love track and field. It’s in our veins forever. But so our the friendships we built through track and field. 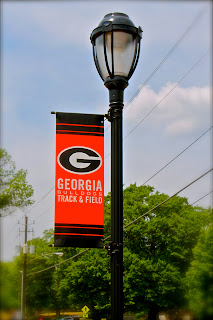 That was clearly proven when Katie and I met with friends we haven’t seen in ten years for dinner on Friday night. There was no awkwardness. It was just like old times. I was afraid we wouldn’t get all of our visiting done that we wanted so I came with an agenda. I had visited everyone’s Facebook page on my flights down to Georgia, minus Laura who quit Facebook. She gets a break though after having three babies…separately…in three years.
I wanted to know about husbands, marriages, kids and careers…all the details Facebook doesn’t tell me. Of course there was plenty of the in betweens that filled in those highlights. We laughed and cried and all went around the table sharing, much beyond anything we would ever post to Facebook or even on a blog. 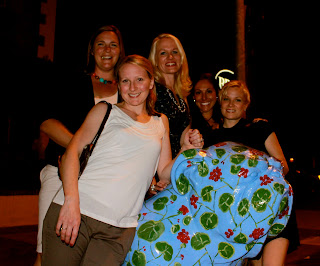 We walked the streets of downtown, sharing more stories and stopping to visit a Bulldawg. We all decided we can retire in Athens, Georgia together someday, at least we want to live there from October through April each year. But before that the girls think they had better pay me a visit on the prairie. I warned them there isn’t anything overly exciting to do on the prairie but I would love for them to visit us. 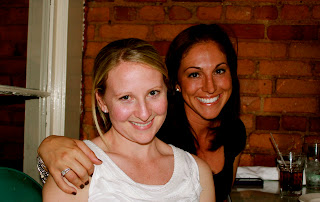 The girls reassured me they just want to see the land, the farm, my family and as Melissa the New Yorker said, “I read your blog. We’ll bake. Because that’s what you do.” 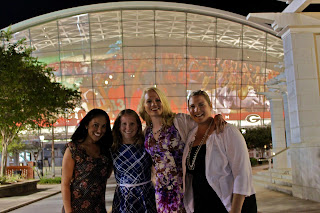 Melissa, Laura, myself and Katie…all met because running and throwing brought us to the University of Georgia from New York, Ohio, North Dakota…and Georgia. Over a decade later with each of us married, living in four different states with nine children between us, we are still as true of friends as were in O-house dorm on the 9th floor. They still call me Dakota and find it amazingly intriguing I live 100 miles from a Starbuck’s or Wal-Mart. While we might use technology to stay connected between our visits, it’s the face to face time that matters most.
Latifah, from South Carolina and a stand out high jumper, also lived on the 9th floor of O-house with us. She was the one who rallied both Katie and I on Facebook to attend this past weekend. But it was the face to face time that really brought us all together to reconnect. 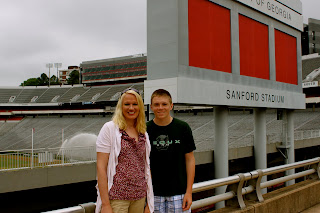 There was another important connection that was made this weekend, not through Facebook but also through face to face time. It was between my son and me. We see each other all the time but it was “above fun” as he said this afternoon to take in this weekend together. 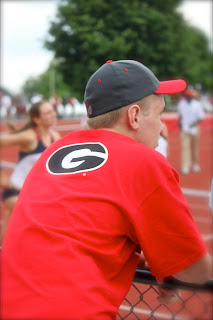 I wanted to plant a seed in our 13 year old son that even if you are from the rural prairie, you can have big goals and dreams. 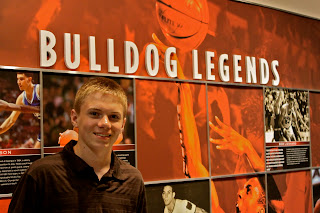 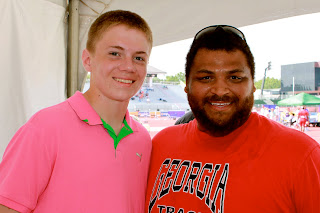 My friend and former teammate, Reese Hoffa and I came to UGA together. Many years later, I am a working prairie mom of three and I haven’t competed in throwing in over a decade. Reese is a world champion and 2 time Olympian. He has a career of throwing the shot put. Someday, he’ll retire to become a teacher and coach alongside his wife, Renata. But for a few more years, he is training and competing at the top level in the world. He planted dreams in Hunter this weekend. 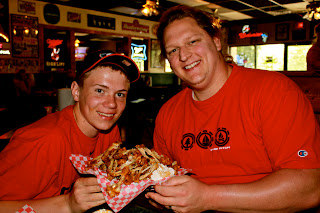 Aside from big dreams being planted in Hunter this weekend, he also learned how to eat a lot of wings from Katie B’s husband, Randy. So many wings that I am going to dedicate an entire post to Randy and my son’s meat eating.  More on that later tomorrow. 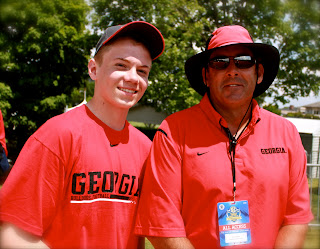 All of this reconnecting through face to face time this past weekend really comes to down to one person who initially planted the seed of the University of Georgia in me. That credit goes to my friend and former coach, Don Babbitt. He was a California guy in his first year at Georgia who came to the dreaded blustery prairie in the dead of winter to make a home visit and recruit me to UGA. It was the beginning a long time ago. Things didn’t work out for me to throw as far or for as many years as I wanted to. But this past weekend having my son stand shoulder to shoulder with Coach Babbitt made me thankful for the connections I did make during my time at UGA. It was a full circle moment and I felt like I handed off a torch of dreams to Hunter.
But the biggest take away cemented into me from the weekend is simply: Relationships matter. You have to take time for people. Facebook or any other social media tool can be a connection point to bring you together or help you stayed connected. But face to face time trumps Facebook.
Do you use Facebook as a replacement to spending face to face time with friends or as a tool to stay connection in between visits?

Previous Post: « Revisiting the Georgia Chapter of Life
Next Post: Hunk of Meat Monday: Tricks to the Best Buffalo Wings »