I am the mother of a teenage boy. 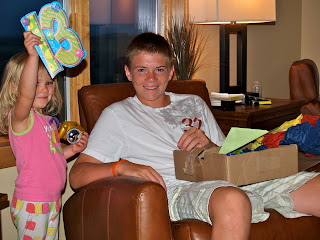 I was asked by a friend in August near Hunter’s 13th birthday if my blogging about him would decrease in his teenage years.

I hadn’t really thought about it until she asked.
Parenting a teenage…let’s face it…is not easy and blogging about it will be therapy for me at times I think! And therapy for my husband because I will type and not talk incessantly to him.

So hang with me today as I mentally prepare myself for our upcoming Friday night outing for our teenage son.

I know we are somewhat protected from the “big world” but even on the prairie we have to tackle teenage hurdles like everywhere else.
And tomorrow comes our first big teenage hurdle. Of course the teenager doesn’t see it as a hurdle, just nervous and new to teenage years parents see that way.

It is Homecoming.
Our small town’s Homecoming football game and dance.
Grades 7-12 all go now to the same dance.
And not just our town but the neighboring town that combines with us for sports…their kids go also and the dance is in their town, 26 miles from our home.
Gulp.

For weeks I have being having flashbacks to wretched junior high dances of my past.
I remember standing in a circle of my friends talking nervously and avoiding eye contact with all boys because I was taller than all of them at my first 7th grade dance.
I wore black and white houndstooth stir-up pants (sewn by my seamstress mother) with a color blocked sweater and a red headband, the same out fit that I wore for my school pictures that year. I was fancy.

The best thing that happened in junior high is that we learned dances in PE class.
All over the school you could hear “Gloria” and “The Hustle” blasting on the record player from the gym while different PE classes learned a variety of dances and yes CD’s (maybe) had been invented by then but we still had records for our music.

We learned the basic jitterbug as 9th graders. (My husband attended National FFA for four years…learning the jitterbug also. Big points for him 15 years later when he met me.)

School dances became less awkward between the groups of boys and girls because at least we knew we could Jitter Bug together and didn’t have to wait until a slow song to awkwardly stand 18 inches a part from a boy who you didn’t want to make eye contact with while swaying back and forth.

I have digressed or as Hunter says to me “Moooommmm, that was 20 years old.” I was young when I birthed him but suddenly I am an old, out of touch mother.

Back to our teenager’s pending first dance.

After much mental debate on my part and support from my once an angel teenager and now husband, Hunter is going to his first school dance.
If he was still at his previous Christian school we wouldn’t be dealing with this issue. They don’t have dances. Ahh so much easier.
But public school on the prairie is different.

Hunter’s time will be limited at the dance. He won’t ride the bus home and instead Nathan will be there to pick him up for a safe and earlier arrival home, just in time for a quick night’s sleep to be up and ready by sunrise for opening youth pheasant season the next morning.

I hope (and will be praying every ten minutes Friday night that) our teenager is respectful, kind, nice to the girls even to ones wearing houndstooth stir up pants but that he isn’t bold enough to dance. And if he is going to dance, I hope he jitterbugs and doesn’t feel compelled to awkwardly sway back and forth like every junior high boy a majority of men.

Hunter, Miss E and I practiced basic jitterbug moves last night in the living room. He told me “Oh, Mom that is so 80’s” which made me burst into belly laughter, guessing that my grandparents were jitterbugging at fraternity and sorority dances after World War II.

What’s your “favorite” memory of your first school dance? Or what do you remember wearing to your first dance?