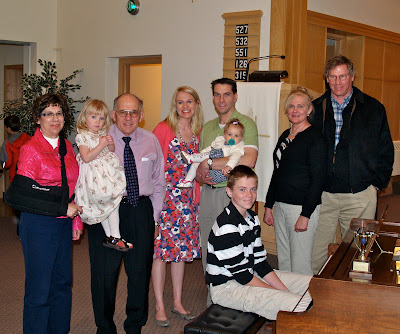 Yesterday afternoon Hunter had his annual spring piano recital. He played a duet with younger boy and two solos. We were proud of our piano playing boy. Hunter had Grandpa Fred, Mama Jane, Grandma Carol, Grandpa Eldon plus his parents and sisters as his piano recital fans. In a rare moment to record this memory, I came out of hiding from behind the camera and joined the picture. What the picture doesn’t show is Hunter is now exactly the same height as me or maybe a teeny tiny bit taller but I am not admitting that to him…yet.
You can see a gold cup on the piano. Hunter earned that from his festival this year after three consecutive years of superior ratings. It will sit proudly on his shelf  while bringing balance to some of the sports related trophies and medals!
Hunter’s last solo he played today was “You Raise Me Up”. He will continue to practice and work on it to play at Kirsti and Mike’s wedding in late May. He has it almost memorized and it is beautiful. As Nathan told him “now you are really playing music.” His piano teacher (who I just learned is a loyal reader of this blog!) said to me today “he is sure to make some people cry at the wedding when he plays that song because I just about cry during his lessons–and I’m not family.” Indeed, it is a powerful song and especially fun to see and hear Hunter play it.
I still can hammer out most of my 6th grade piano recital piece from memory. Thanks to the diligent Mrs. Karner making me practice 300 minutes a week, I had “For Elise” perfected many years ago. While Hunter doesn’t always understand why we insist on his piano playing hopefully he will have a realization when he is in his 30’s and can sit down at the piano and still play “You Raise Me Up” that indeed our insisting on his piano playing paid off for him.

I am banking on that realization and I will wait twenty years for Hunter to appreciate his gift of piano playing. Until then he will keep plugging along and playing, showing an occasional smile that shows us he (maybe) loves to play the piano as much as we enjoy hearing him.