This week I am embarking on a week of hard travelin’ which is a path I have done many times before in my career. However in the next 72 hours I will “experience” 7 flights, 5 airports and 3 hotels. Plus the hotel we’ll stay in for Hunter’s basketball tournament this weekend. Chalk that up to 4 hotels in a 6 nights. Now that is a new level of hard travelin’ for me. And yes for those inquiring minds, I still am a nursing mother which makes traveling and going through security very eventful. They do indeed run security tests on breast milk. Who knew? Now you do.
I had promised an early in the week post on how Nathan and I met. But he is actually writing it. Be patient. While I am doing my hard travelin’ Daddy is at home holding down the fort with some great help from his mom…fondly called Nana by our kids. She keeps them very well fed. And Miss Elizabeth is doing her share of hard travelin’ this week with Daddy. But not at a “meeting in an airplane up high” like she says I am doing. Instead her hard travelin’ is… 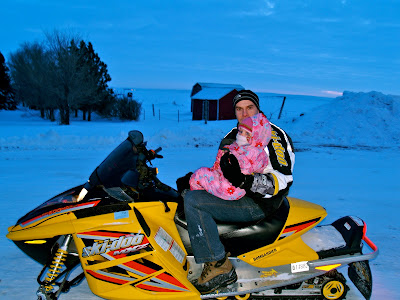 on her Daddy’s favorite winter recreational vehicle. Hunter has already told Miss E that she can get her own pink snowmobile which she is all for that idea. Nathan bought two new snowmobiles before we got engaged or married. And I love to tease him those would be the last…but a pink snowmobile might be fun someday. Until then for Miss E the yellow snowmobile will have to do. She finds that sitting snug on her daddy’s lap, going very slowly down our driveway and back is quite entertaining.