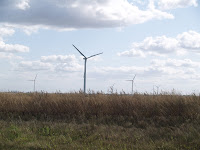 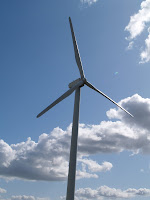 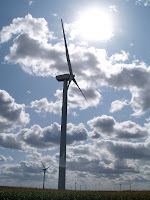 Following a wonderful church service that included Nathan filling the church with the tremendous sound of his trombone solo and then stuffing ourselves at a traditional church basement potluck, we took an afternoon road trip. Yes we missed Brett Favre leading the Vikings over the 49’rs and Hunter survived missing it. I had done a little research ahead of time so we could find a fun pumpkin patch to visit. I searched state tourism web sites and found that our options were 90 miles in one direction or 84 miles in the other direction. Indeed, we live on the prairie, in the middle of no where. But we were determined and we discovered a great little hidden secret of a pumpkin patch! Along the way, we saw wind energy being produced at its finest. It was and still is crazy windy today. The wind turbines were working hard as we passed them along the highway. 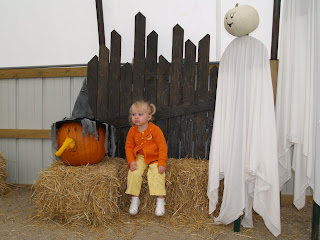 Just up from her road trip nap, E was not so sure about a trip to the pumpkin patch. And actually we never did load up in the wagon that would have driven us to the patch to pick our own pumpkins. It was just too windy. So headed down the path instead to the… 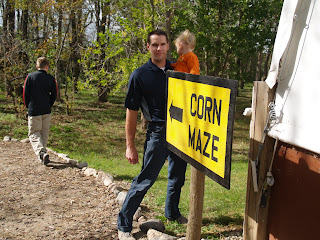 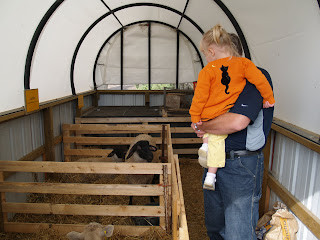 Before starting the corn maze, we got to see a variety of farm animals from donkeys, a long-horned steer, ponies, chickens, lambs and goats. 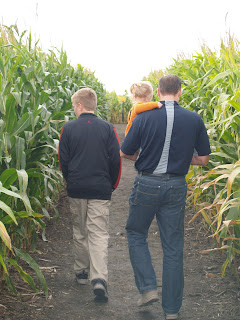 Let the corn maze begin! There were actually yellow bricks along the path and it had a Wizard of Oz theme throughout the maze. Hunter ran ahead and would sneak up on us. (Yes we all were there but Anika was hidden in her perfectly non-windy tent of a stroller and slept until we all were in the country store eating homemade pumpkin pie!) 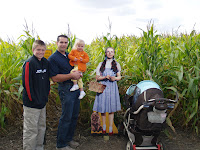 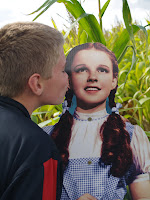 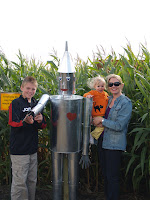 I actually pushed the stroller into a picture so we could document that our baby girl was there, safe and sound, out of the wind.
We only took a few wrong turns in the maze. Elizabeth would say often “Where’d Hunter go?” And suddenly he would reappear. The corn maze was well done and a lot of fun. And in parts of the maze the corn was over eight feet tall. 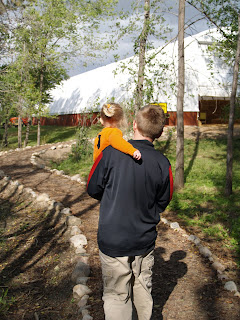 There was a large barn that held pumpkins already picked along with some hay bales. We opted for the barn pumpkin option as I mentioned due to the wind. But next year we will be back for the wagon ride to the patch to pick our own. 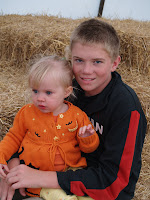 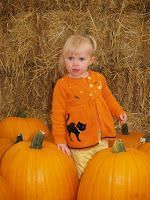 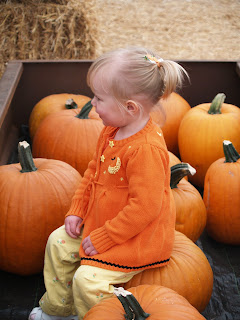 The pumpkin selection was tremendous. They had traditional orange pumpkins for 29 cents per pound and a cart full of specialty pumpkins including a bluish gray colored pumpkin we brought home for 39 cents per pound. Plus there were carts of gourds, sqaush and other items for sale in the barn. Hunter picked out a special pumpkin from the area labeled “Pie Baking Pumpkins” and delivered it tonight to Gma Carol. I think he might just get a pie or two made from that pumpkin!
There was another brand new building that sold country styled home furnishings along with a brand new, clean bathroom. A clean bathroom is a huge plus! And we ate mouth watering fabulous pumpkin pie and coffee before departing. The patch is only its second year of business and run by a local farming family. We sat and visited with the owners as we ate our pie in the country store. This business is clearly a labor of love and the woman told me “her dream come true”. I love “agri-tourism” as it is now termed. It is wholesome, geniune and creates perfect family outings. 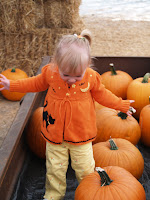 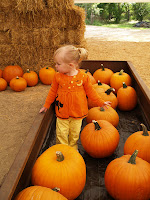 Elizabeth was way too busy looking around and talking to Hunter to actually look at the camera! 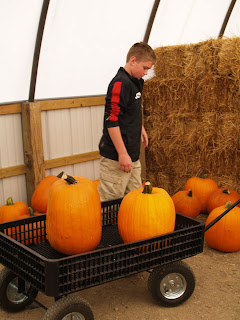 Hunter loaded a wagon with two large pumpkins that now have a home outside our front step and will be carved in late October. It was a wonderful afternoon, full of memories and worth every mile driven.
If you are in driving distance of Oakes, ND…as I know a few of my loyal handful of readers are, there are three more weekends that Potter’s Way is open. I think it would be an awesome school field trip or family weekend road trip for all of you. Check it out and send me pictures of your trip!