Earlier this week, I met with some local girl friends and thought we were going to pizza together. Instead it was more than pizza but a diapers and wipes baby shower for our soon to arrive baby! About a dozen of us all drove to a nearby town to our favorite pizza spot. We played some baby shower games and I opened many gifts that included a huge array of diapers! We are totally prepared now. I was so touched by this outing and shower. Two years ago when we moved here I would have never dreamed of having girl friends from this little town that are so kind and thoughtful. Truthfully I thought it was mostly old people that lived here. But instead I have found a circle of friends who will be here with our family for a lifetime.
Yesterday afternoon we had an ultrasound and weekly appointment to check on our Baby P. Plus Miss E had her 18 month appointment. She checked in just shy of 28 lbs. and is 34″ in length. It was her last immunization shot until she goes to school! Hooray. We also got some special creme to try on her extremely sensitive skin which has been breaking out as you can see (since I don’t edit my photos!). She has allergies we know but have not narrowed down exactly what it is that cause her little boils on her face.
The ultrasound was exciting. Because I have been measuring so far ahead of schedule we were thinking the baby could already 8+ lbs. Not so! He or She checked in at 6.6 lbs. which is 8 oz. less than Elizabeth was at her 36 week ultrasound. So I instantly thought “it must be a girl”. But then the heart rate was 128 during the ultrasound. During our appointment the baby’s heart rate was in the low 140’s which made both Nathan and me think “maybe it is a boy”. Hunter’s heart rate was always in the upper 120’s to low 140’s and Elizabeth’s was never below the upper 150’s. We really have no idea now and are excited for the surprise. The doctor’s explanation for my measuring ahead of schedule is simply “it is how you are carrying your third child”. My fluids were normal. The baby’s size is good. It was all reassuring that if I do go into natural labor soon as I did with Elizabeth I could deliver a baby with out a c-section. 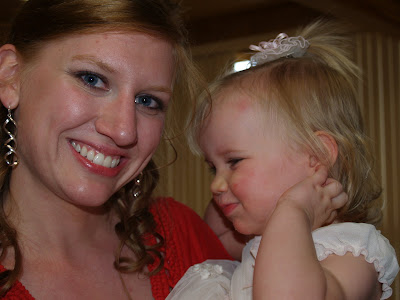 This is rare post with very few pictures but Miss Kirsti gets the picture of the day today. As we were driving home from our appointments, Kirsti called my cell phone. I assumed it was to check in on how my ultrasound went. Instead I heard a shrieking and excited Kirsti shouting, “Katie! Katie! I’m engaged!”. Indeed sweet Michael asked Miss Kirsti to marry him late yesterday afternoon. It was a complete surprise. We are all thrilled! Last night she asked me to be her matron of honor. I am honored to be. She also had one more request. It was “can you please not be pregnant for our wedding?” I promised and Nathan agreed that would not be a good idea. So now I have major motivation to lose 40+ lbs before this grand wedding event. I asked Kirsti to email me some pictures and will share a few of the happily engaged couple soon.