This is not going to become a regular posting of the Pinke Post, covering off on all family members birthday’s with pictures and memories. It is a special feature in honor of my January birthday family members. (My birthday was January 6th in case you missed it…I didn’t report on it!)
Today, it is HAPPY 84th Birthday Grandpa Sonny! 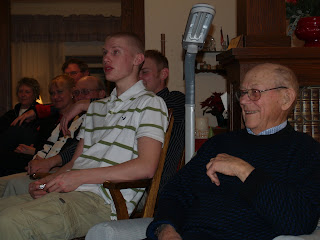 My Grandpa Sonny is hands down one of the greatest men on this earth. He is on my short list of favorite men, tied with my own father and my husband. I have a lifetime of memories with my grandfather. Riding on the tractor, combine and host of other farm equipment. Seeing him at my games and meets and also attending decades of basketball and football games with him. He is a true sports fan. Hundreds, maybe thousands of homemade meals together made by either my grandma or my mom. Oh and a few by me. Just a few though. Three decades of holidays. A few years ago, Grandpa went on a business trip with me. It was his cup of tea. The National Cattlemen’s Beef Association conference in San Antonio, Texas. He was in his element. 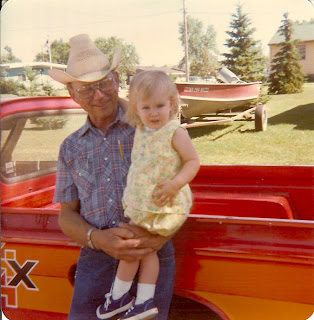 Grandpa married a woman who grew up just down the same gravel road he grew up on and she attended the same one room school house with him. They did not start dating until after Grandpa returned from World War II and were at the same college with Grandpa in the fraternity across the street from Grandma’s sorority house. Five kids later, I was the first of ten grandchildren and Hunter was the first great grandchild. Grandpa still farms the land that his ancestors from Norway started farming in 1883 and sleeps in the house he was born in which his father built in 1919. You just do not find people like him anymore. Plus he is an original.
Happy Birthday Grandpa.