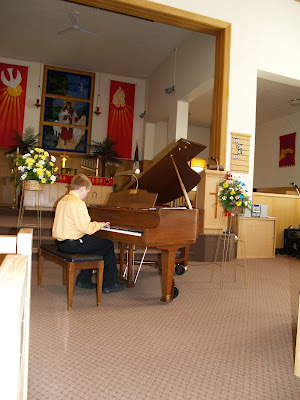 On Mother’s Day, Hunter played in his first piano recital. I snapped a picture while he was playing his first piece. This past week was Hunter’s last week of school. Rural schools get out early and start early…Hunter learned his first day of 5th grade will be on his 11th birthday in August. It’s “summer” now and he starts baseball in less than two weeks. Sometime soon I will get pictures from Hunter’s camera. He had a class trip to the North Dakota capital building among other locations to wrap up their year of social studies studying North Dakota. He came home with two stuffed animals for his baby sister including a meadowlark that sings. His lunch box was empty. His camera battery was dead and he had some coins left in his pocket. A successful field trip.