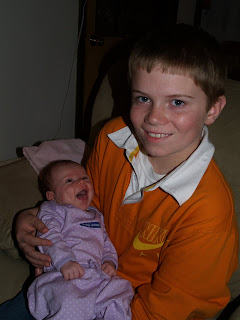 Elissa was thrilled to see Hunter after school yesterday! She smiled and was so happy. Hunter dotes on his sister and is a huge help to me. He rocked her to sleep yesterday–for one of her many “cat naps”. 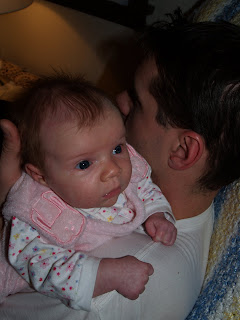 Nathan rocking last night after bath time. Elissa likes to be held up and she holds her head high and steady. We can already tell she is quite the independent girl. 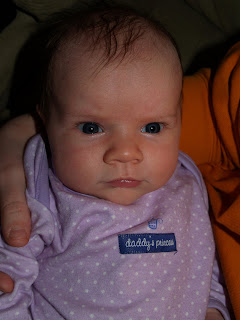 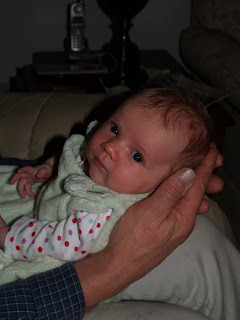 Chillin‘ with Grandpa Eldon…Nathan and I often times go to walk the dog child Charlie while Elissa hangs out with Grandpa and Grandma and Hunter practices piano at their house. This is usually following a huge meal that Carol makes for us–a nice perk of living close to family. Carol is a great cook and we enjoy many meals at their house. 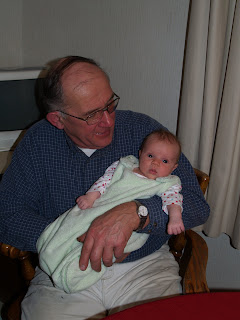 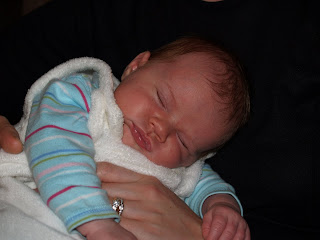 Out like a light!
It is a frigid morning on the northern plains today. Hunter just left for his walk to school. There is now a “city bus” for the “town kids” as they are referred to but Hunter thinks the “city bus” is too slow to get him to school so he waits until it passes by our house and then starts his walk all bundled up so he can get to school and play on the playground before school starts. Elissa is still sleeping. She put us through all the stops last night and finally crashed around 1AM for close to a five hour sleep and now again another good stretch of sleep…too bad we are not sleeping now.
After winning his local 10 year old boys age division in a free throw contest on Sunday, Hunter is now gearing up for the district competition in two weeks. He also has been practicing diligently on a couple hymns for his piano solo debut in church in a few weeks. The house construction is progressing on schedule. Nathan and his dad spend time on the weekends working on things like installing the central vacuum system and building the fire place. This week the electrician’s crew and heating people are working. Our carpenter and crew will be back early next week. If things go according to plan, we’ll have sheetrocked walls by the end of the month. Once that happens, Nathan and Eldon will begin their interior finishing work in their “spare time”. Our plan is still to be in the house sometime in April or early May. The baby is stirring and waking up…over and out.