Have you questioned your beliefs lately? The headlines grab us and make us wonder what the future holds. Without even touching on the federal government corruption and scandals, just reading food and agriculture headlines has people pumping their fists, waving their arms and arguments escalating. Whether it be the debate of South Korea and Japan’s reaction to Oregon’s “Rogue Wheat”, NPR’s Organic Pesticides: Not An Oxymoron or Blogher’s feature of Aimee Whetstine’s Listening to the Women of Monsanto, I have seen an uprising of people questioning their beliefs and the future.

I firmly believe in the future and what it holds.

For the past couple months, I have volunteered with our local FFA chapter to help with the Ag Communications contest. They give me hope and excitement for the future.

If you are not familiar with FFA, it used to be solely the “Future Farmers of America”. But FFA is not just about farmers anymore. It is a leadership program. It is instilling hard-working values and life skills into an entire generation across America. As the National FFA Organization website says, “So today, we are still the Future Farmers of America. But, we are the Future Biologists, Future Chemists, Future Veterinarians, Future Engineers and Future Entrepreneurs of America, too.” 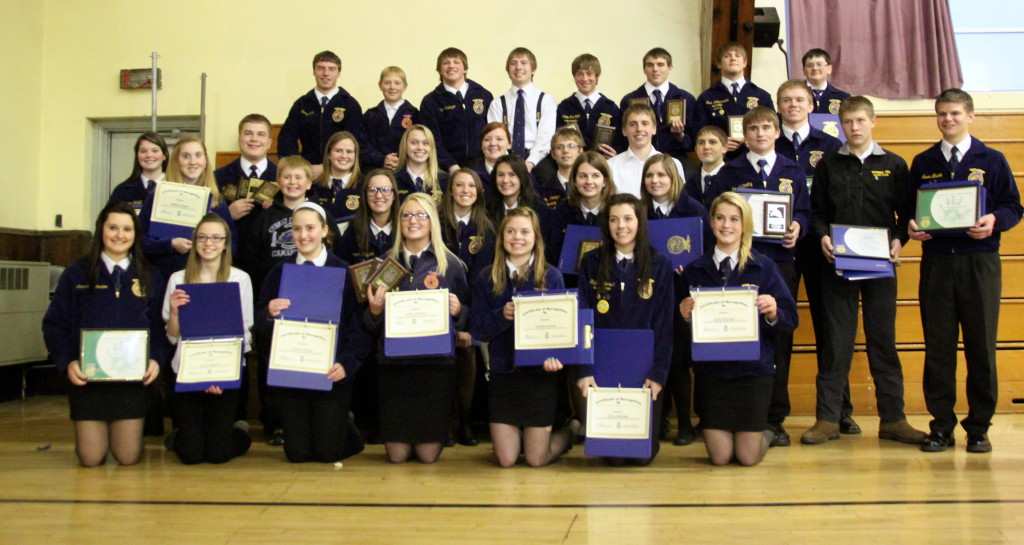 The local FFA kids I have worked with have dreams of working in medical, law, engineering, teaching, agriculture fields and one even is already thinking about being an elected official. These are our future leaders.

As I shared on Facebook and Twitter this past weekend that our son, Hunter, was preparing to go to State FFA in North Dakota, a Southern California friend texted me and said, “I want to move to the prairie so my kids can be in FFA!” The truth is there are FFA chapters in schools all over the country. I am thankful for what our local chapter has already done for Hunter at age 15. 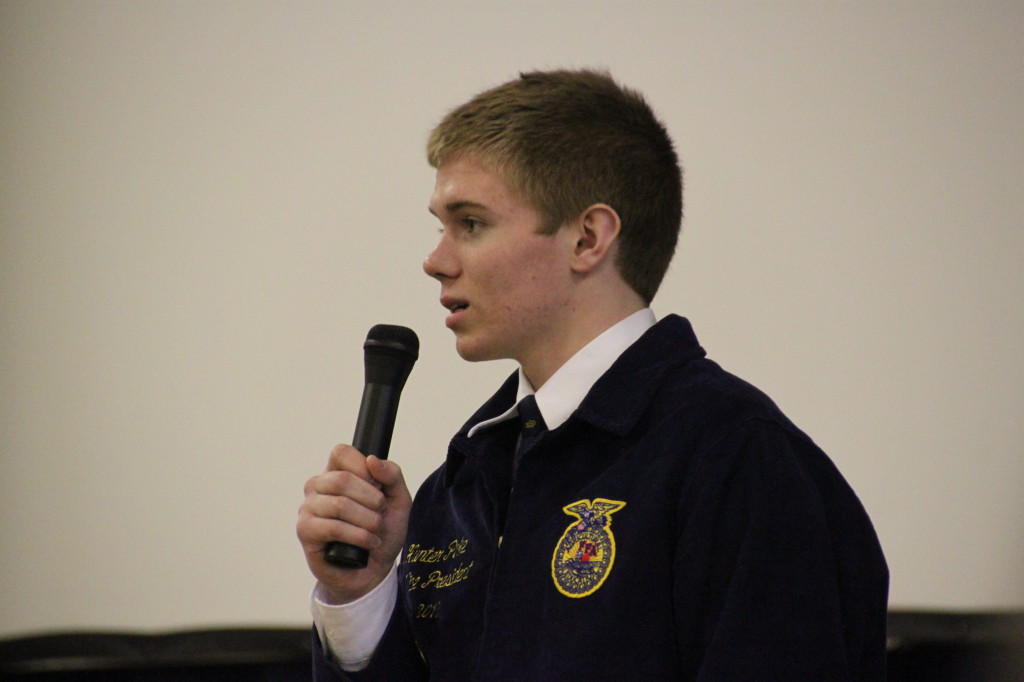 Each ninth grader in FFA learns the FFA Creed. There is a local, district, state and national competition for the FFA Creed. Hunter has been practicing since last fall when I took this video of him before a football game. He won the local and district competition. Today he competes in the state competition.

He wants to win. We want him to win. But he told me, “it all depends on how I do, the competition and the judges”. He will do his best. And win or lose, he has learned the FFA Creed that gives me hope in the future, not just in the future of agriculture but in the future of our country and future leaders.

Read the five paragraphs of the FFA Creed below in the visuals and then decide for yourself if you believe in the future. 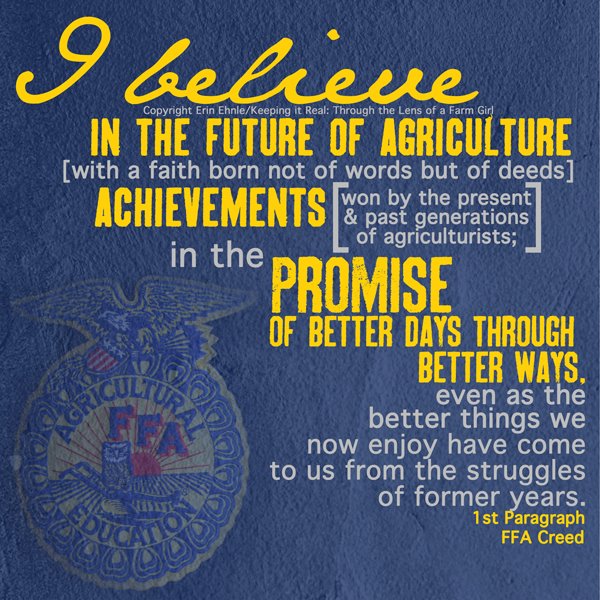 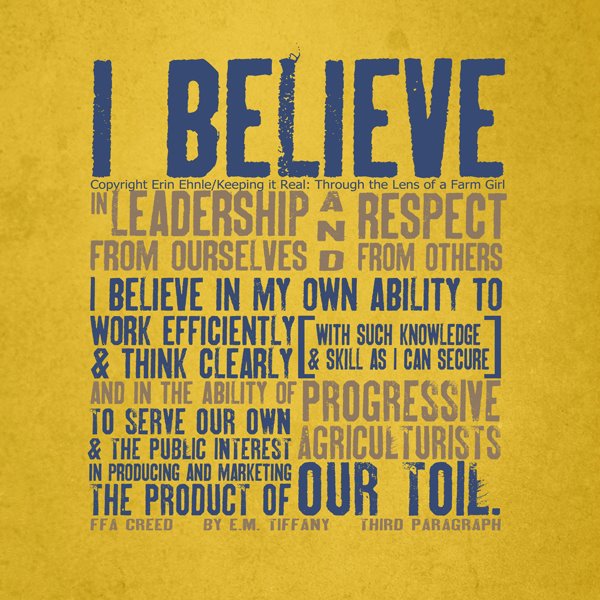 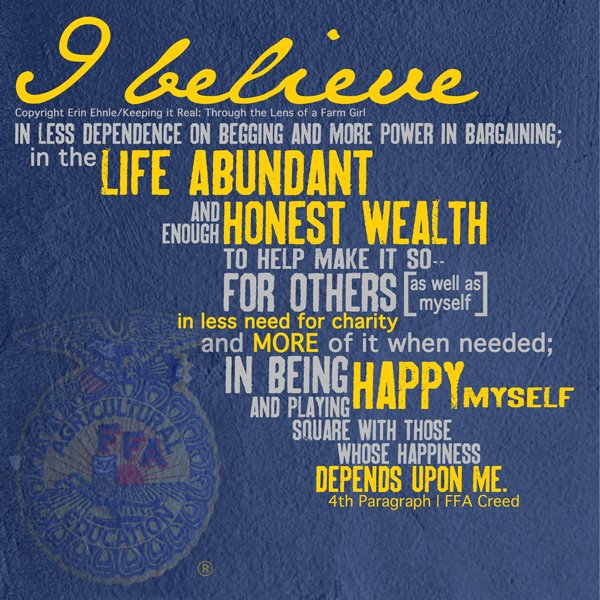 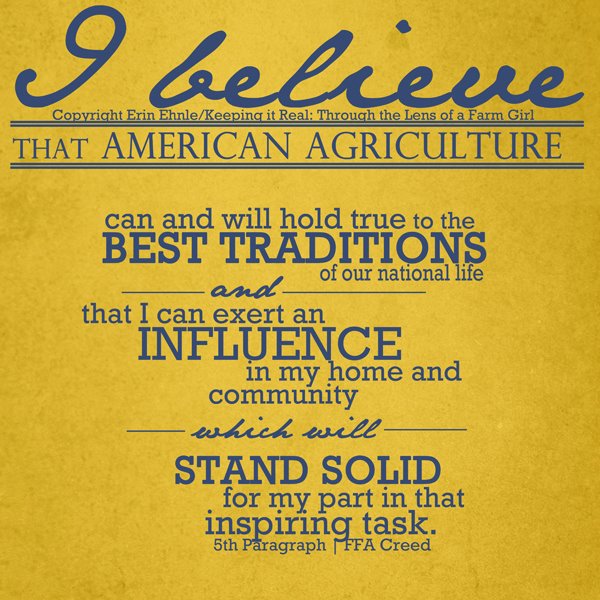 These images are created by Erin Ehnle/ Keeping it Real: Through The Lens of a Farm Girl and used with permission. Purchase Erin’s amazing photography and inspiring work here.