I testified at the North Dakota Legislature House Education Committee yesterday. It was the first time I have ever stood to testify as a private, tax paying citizen in a committee hearing. For me, it was a significant moment. I have sat through agriculture related hearings earlier this year as a state employee. My mind would swirl with ideas and analysis of who should be testifying on bills and why so few people do testify on bills it seems. Since leaving my state job two weeks ago, I feel a great calling to make sure I do not leave behind being active in public service in the new chapter I am entering. I will volunteer and I want to continue outreach to others, engaging them to share their voice with their elected officials. I want myself and others to impact change for good for local communities, regions, states and countries

My first time testifying gave me some insight and observations. I learned from this experience. I grew from it. I was empowered. Here are 7 things I learned… 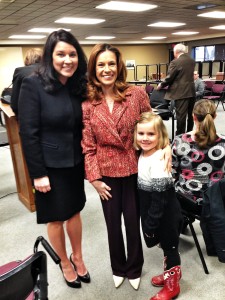 1. Prepare ahead of time. For my preparation which was less than a week with a family weekend away in between, I called people I knew would give me tips and insight on how to best prepare, points to include or what the opposition on the bill, SB 2229, Early Childhood Education was saying. I read research that expanded my thinking. I read examples from other states and also learned about what was currently working in our state, North Dakota. I read through North Dakota Common Core standards for kindergarten. This all helped me understand background, give me depth in my preparing my testimony and will help know more for the future on early childhood education related topics. Preparing takes time but in order to best share your voice, you must prepare ahead of time.

2. Don’t operate in a silo. Yes you are one voice. I am one voice. But in order to pass a bill, one person testifying in favor of it won’t be enough. We need an army of voices to create positive change. I reached out locally to community members, friends and those I knew would contact their elected officials and members of the committee to share their support and personal insight on the bill. I asked them to contact their fellow local friends to ask them to reach out on this bill. Not everyone agreed with me and I accept that. I celebrate differences but it was good for me to understand why not everyone wants to provide some state funding for early childhood education to public schools.

3. Be respectful. I am emotional. But I have learned to keep my emotions respectful. Slinging mud at the opposition is in poor taste and reflects on you. It discredits what you are sharing. Stay positive and respect the other side’s differences. As I prepared my testimony, I knew that our local State Senator had already voted against in this bill weeks ago. I did not want to be disrespectful but I wanted to highlight points from our local experience that I felt the House Education Committee needed to hear and had not prior to my testimony. I knew what we had done in our community through fundraising was unique compared to the other 46 school districts in North Dakota who either had private pre-schools available or were using federal funding for their public school pre-school. I respectfully wanted to highlight our community as an example and school that needs this bill and funding.

4. Sharing your voice takes courage. In prior hearings I have attended through my past state employment, I was often frustrated that more tax paying citizens were not attending hearings. Sharing takes courage. It takes time. It requires planning including time away from work and family. The truth is it is easier to leave it up to someone else to do. Some people would say I belong to _____(fill in the blank) organization and they represent me. The truth is we would rather just assume our elected officials are best representing our interests, or our membership organization is lobbying on our behalf and not take the time to share our voices of support or concern. If you don’t share your voice, your elected officials will never know what you have to say. What you have to say can create positive changes. We all need courage. I certainly did. Courage does not always come naturally but courage builds character. That is exactly what I learned yesterday.

My dad also reminded me yesterday as I drove to Bismarck, our state capital that my courage to passionately advocate for early childhood education and testify on this bill may have come from my late Grandma Dorothy, my dad’s mother. I remind my dad a lot of her. I always thought she was eccentric and a little odd. But she was passionate. She never fit the “norm” of women of her era. That might be a lot like me. In the 1960’s, as a wife and mother of four, Grandma Dorothy completed her Master’s degree in Early Childhood Education and started the first ever kindergarten on an Indian reservation in the nation. It was in a nearby town to the family ranch where she was raised. It is the town and school that both my dad and his brother graduated from in the early 1970’s. Then my dad married my mom a few years later. My mom also has an Early Childhood Education degree and instilled early childhood education into our family. She was the most hands on stay-at-home mom while also substitute teaching at the local nursery school and later in rural public schools near our family farm. While my mom and Grandma Dorothy were not similar to me as people when I grew up, I know that their work and lifelong examples gave me courage to share yesterday. 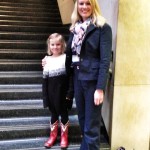 Elizabeth and me, empowered together.

5. Empower others by your example. Just like my mom and grandma empowered me through their examples and passion, I want to do that for others. No matter what I do in my career, I want my greatest example and impact to be on the lives of my three children, ages 3, 5 and 15. My pre-school attending daughter, Elizabeth heard me talking about this hearing and bill last week to my husband  She wanted to attend since “lawmakers” were “talking about pre-school” as she said. She is captivated with the Capitol, mostly because I used to work there. But I knew this would be a different experience for her and one that she would remember as she gets older. We represented our personal experiences but also our community along with her local pre-school teacher who also was there. Elizabeth’s teacher shared a powerful and thought-provoking testimony with the committee that would inspire anyone to believe in early childhood education. 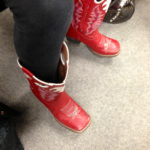 Be who you areremember as she gets older.

6. Wear red cowgirl boots. (Be who you are.) I was reminded when Elizabeth picked out her outfit the night before we were going to leave to always be true to who you are and be your authentic self. She said, “Mommy, can I wear my red cowgirl boots to the Capitol?” I said, “Yes! Of course you can.”

Most people can spot a phony. When courageously sharing, you will be more confident if you are telling your story, in your words, exactly the way you are.

Elizabeth is a red cowgirl boot wearing, pre-school attending, rural North Dakota girl. The committee saw that yesterday. Although as she says she got “fradge fright” (stage fight) and could not bring herself to say what she wanted to say to the committee. She later said, “I should have at least “It’s nice to be here!” Either way, Elizabeth was transparent as were all that testified and represented who they each were personally and professionally. 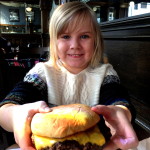 Life is better with beef.

7. Unwind with a cheeseburger. After it is was over yesterday, we went to lunch for laughs and enjoyed some down time. I realized that I have done my part. I shared as best I could. I was heard. But I am not going to over-analyze and pick a part what I should have or could have said. Eat a cheeseburger and move on to your next endeavor. I will still follow-up with legislators on this bill and track its progress but I will not obsess over it. Elizabeth said at lunch, “Mommy, next time we go to a meeting like this, you need to write down what I should say and practice with me at home, like you did!” Exactly true. There will be a next time.

No matter where you are located, I encourage to engage with your legislators. In North Dakota, it is easy to contact them. It is easy to track bills by creating a simple log-in. Pick one or a few bills that impact you, your business or industry or community. Our legislative session only goes until May 1 and does not meet again until 2015.

The time is now. Share your voice and empower others.

Previous Post: « 5 years of blogging: Things are changing around here…
Next Post: The Judgement of Life Choices »