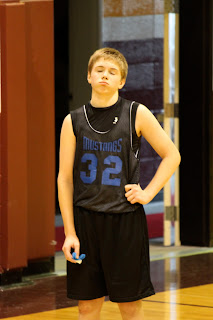 This season of basketball for Hunter has been full of lessons learned, losses, disappointment, defeat and then the display of tenacity and toughness of the team to turn around and win. Last week in the semi-final game of the district tournament, they lost a very close game on free throws at the end of the game, after leading the entire game. The team that beat them went on to win the district championship.
But the next late afternoon, our team played again. It was the loser out round. They won less than 24 hours after being defeated. This coming Monday afternoon, our team will play in the regional tournament quarterfinal. It’s a must win game. I feel victory coming our way.
I haven’t been organized enough to download the hundreds of pictures I took during the games, I found this picture of Hunter from a couple years ago. He has felt defeat before, learning to keep going and win. 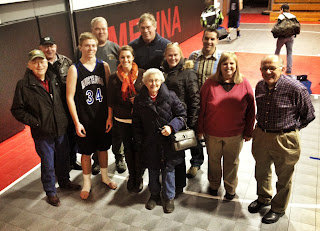 Like the games I watch as a fan and mom in the stands, I feel defeat at times in my working life versus personal life balance. I struggle to find the best solutions. I am my own worst critic. As I see Hunter playing basketball, whether in defeat or in the glory of winning, I see my life flashing before me. I know I have not been defeated. I have won in the game of motherhood and it fills me with the greatest joy and earthly reward.
16 years ago, I was pregnant with Hunter. I have only known my adult life as his mother. The longer I sit bleachers this winter, the more I analyze my life as his mother it seems.
He will never remember what my job title has been. He cannot tell the difference in my paycheck from when he was five years old to today. But what he does know is that I, along with my husband, his sisters and generations of family are sitting in the stands in support of him. I have won. He has won. We have won. In the game of life.
But I think Theodore Roosevelt says it best.

It is not the critic who counts; not the man who points out how the strong man stumbles, or where the doer of deeds could have done them better. The credit belongs to the man who is actually in the arena, whose face is marred by dust and sweat and blood; who strives valiantly; who errs, who comes short again and again, because there is no effort without error and shortcoming; but who does actually strive to do the deeds; who knows great enthusiasms, the great devotions; who spends himself in a worthy cause; who at the best knows in the end the triumph of high achievement, and who at the worst, if he fails, at least fails while daring greatly, so that his place shall never be with those cold and timid souls who neither know victory nor defeat. (1910)

“…the man who really counts in the world is the doer, not the mere critic-the man who actually does the work, even if roughly and imperfectly, not the man who only talks or writes about how it ought to be done.” (1891)

“Criticism is necessary and useful; it is often indispensable; but it can never take the place of action, or be even a poor substitute for it. The function of the mere critic is of very subordinate usefulness. It is the doer of deeds who actually counts in the battle for life, and not the man who looks on and says how the fight ought to be fought, without himself sharing the stress and the danger.” (1894)

Who is the critic you need to overcome to find your balance, victory or happiness?

Previous Post: « Scarves add style: how to wear a scarf
Next Post: When Life Hands You Double Overtime… »