When we moved deep into the North Dakota prairie, I told my friends I would miss Starbuck’s and Target the most from our metropolitan Fargo life. Don’t choke on your coffee. Compared to where we were moving to Fargo is a metropolitan mecca. In Fargo I had a 15 minute commute to work from south Fargo to my downtown office. I had an array of pop culture options for shopping, dining and entertainment. Certainly it was the amenities I would miss of city life versus prairie life.

But I was wrong. I hate it when I am wrong. 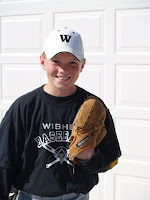 In the first week of moving into our 800 square foot rental house in our small town, a woman knocked on our door. She was a stranger to me. She said, “Hi! Is your son here? I have some boys down at the park ready to meet him and play.” Hunter came to the door and the woman directed him to get on his bike, take a left at the stop sign and ride straight down to the city park and to introduce himself to boys waiting to meet him. Then she got back on her bike and rode away before I even got her name.

Our son, Hunter, had never even rode his bike alone around our block in south Fargo, much less blocks away to the park by himself. He was nearly 10 years old. He never left my sight. Panicked, I called my husband. This small town was his childhood home.
He laughed and knew exactly who the woman was and told me Hunter would be safe and just fine at the park, meeting new friends.

There were not strangers lurking. Anywhere. Not at the park. Not at the one and only grocery store. It was just whispers at the store. The whispers in the grocery were often loud when I passed by, “That’s Nathan Pinke’s wife”. The whisperers looked friendly, just not sure of a woman that didn’t look their Germans from Russia heritage. I looked like an outsider and still do. Tall, blonde and from a town they don’t know. I started to say hello to the whisperers in the grocery store. They said hello back and introduced themselves.

The comfort in knowing people felt safe and right to me in our small town. The wide open spaces. The serenity. The slow pace of this remotely located rural town grew on me within months of our move.

There is not a stop light in our small town. Or county. Or any adjacent county. There is no traffic. And everyone waves when they pass by you, whether they know you or not.

A few weeks ago while commuting from our prairie home to Bismarck I did a radio interview with a friend and nationally known radio talk show host, Trent Loos. It was 50 minutes in length. The biggest accomplishment of that radio interview was that I never lost cell phone service. We talked primarily about farming and ranching myths for Trent’s show, Rural Route Radio.. He was explaining where I lived, where I was traveling to, on air. I said that I live 98 miles from civilization (and yes I pass Starbuck’s at 97 miles). He said that I didn’t see that as a negative, did I?

I said absolutely not and that I was very proud of where I live. It was a short, passing comment. Most people that know me know that I wear rural North Dakota on my sleeve.

The interview was posted on the internet. Some locals listened to it. They took offensive. Although they never directly told me. They just talked about it in the beauty shop or whispered about it when I passed in the grocery store, after they waved and said hello. 98 miles from civilization. What audacity she has.

We each have different experiences. Different takes. Different definitions of many aspects of life. It is one thing that I love and appreciate about people. We can have mutual respect for one another while not always agreeing. Often we get to a better, more successful place by understanding different perspectives.

Living in our small town in the middle of the remote prairie taught me, I don’t love pop culture’s civilization. The truth is what we have on the prairie is precious. The people that have lived here for generations might not know it. They might not embrace it. But my husband and I, as small business owners, choose it as the only place we want to build a business because of the people on the prairie. And the people might not always agree but it is the people that make us want to raise our kids on the prairie. Because the civilization in our corner of the prairie is unique. It’s not what the world knows. It’s Germans from Russia food traditions. It’s trust in one another to let your children ride freely in town to the park. It’s a kind hello in the grocery store.

I boldly and proudly wear my badge of who I am today, where my roots are deep. Prairie dweller. Photographing sunrises and sunsets. 98 miles from Target. Starbuck’s. Far from stop lights and lanes of traffic. 98 miles from what the world grasps as accepted first world civilization.

Now I await the back lash from my Starbuck’s drinking, Target loving, city girlfriends. Do not worry ladies. I love visiting you in the city. Emphasis on visiting.

Do you choose rural or city life and why?