After bike riding, park playing, train riding, zoo watching, Storybook Land touring, Miss A settled in for an afternoon for a nourishing big drink of chocolate milk on Saturday afternoon. With the sun blaring, she was hot and worn out. She specifically requested chocolate milk or in her nearly 2 year old vocabulary “chaca milk”. 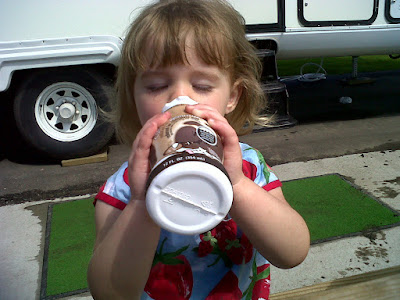 As she was drinking it sitting on the picnic table outside our camper, I snapped a picture of her on my phone.

My mind started wandering and pondering as she drank. I have seen news headlines questioning whether children should be given chocolate milk or any flavored milk. Chef Jamie Oliver has built a name for himself by pot stirring on this topic, specifically around flavored milk in schools and that being a key trigger to childhood obesity.
When I visited Wife of Dairyman and their family dairy farm earlier this year, Nancy and I watched Jamie Oliver’s Food Revolution television show the night I was there. It’s the only time I did. From the one episode, I became acutely aware that suddenly chocolate milk had a black eye. Then last week after my colleagues and I toured the oldest dairy in California while being hosted by my dairy farmer friend Dino Giacomazzi, I thought of where milk comes from and why I don’t thinking adding a little chocolate or sugar really takes from the milk or harms them in any way.
To top it all off, my friend Aimee at Everyday Epistle posted on Milk Wars, discussing competitive parenting and the wrestling between conventional vs. organic food choices.

As my mind raced on these topics, Miss A kept drinking her chocolate milk. She looked up at me with big milk mustache grin and announced “All done!”
My time to think about chocolate milk was complete. We were back to bike riding and park playing.
I didn’t have much else to consider. My pondering on the chocolate milk debate was summed up in my mind.

It’s chocolate milk after all. Kids should drink milk. It’s healthy, nutritious and if a little chocolate makes them drink it then I am all for it opposed to not drinking it. Chocolate milk will never be the brunt of the problem of childhood obesity issues in America yet is taking the bullets.

Aren’t there kids starving in our cities, counties, states, country and of course, globally? We should not be wasting too much energy debating the good and bad of chocolate milk. Regardless if it’s lack of food or too much food, we need food choice education and outreach more for families. We need less finger pointing and less bullets with more positive outreach to change conversations about food.

Every day for me, milk is milk. It’s from cows, cared from and raised by farmers I know and trust. My kids drink plain, strawberry or chocolate milk, with their meals and for a snack, on a cold day and on hot days. Now, let’s get on to the next debate and not fire bullets at moms or schools or anyone who choose chocolate milk.

What do you think is the real “food revolution” that is worthy of discussion and debate?