Today I am linked with Verde Farm and Dandelion House for Farmgirl and Farm Friend Friday.
Farming is in my genes but being a farm girl is a role I fell into and certainly didn’t embrace it as a child, teenager or young adult. My family would tell you I mocked farm life more than praised the farm. Finally as an adult, I was able to learn the values I was raised in came as a direct result from who the people are that raised me and their roots, passion and life were on our family farm. By the time I was about 20 years old, the farm was my favorite place on earth and remains a sacred sanctuary to me.
One area of the farm that taught me many life lessons were the hours I spent hours in the calving barn

with my Uncle Jim. There were many joys and struggles along with miracles of life…and loss in death. I had a strong foundation of understanding of farm animals and was very comfortable in the barn because Jim put me in there when I was just as young…or younger than my daughters are today.

So when Uncle Jim told Miss E, age 3, in late February that after he had a birthday, Auntie Kirsti and Uncle Robbie’s March birthdays were complete, she could make a visit to the calving barn and see calves be born there was anticipation from both Miss E and me.
Miss E’s excitement built over the first few weeks of March. When we called Uncle Robbie on his March 22 birthday, she proclaimed, “Now I can go to see the calves with Uncle Jim!’
I was equally excited for her adventure. Certainly Miss E lives in the middle of the prairie next to a neighbor’s pasture full of cows and calves, she is going to have some cowgirl in her. She’ll be showing cattle with the local 4H club at our Tri-County fair in a just a few years…I thought. 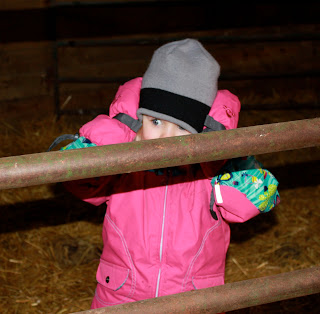 Not until Uncle Jim captured the above pictures last Saturday morning while I was at our son’s basketball tournament did I realize my girls might not be natural cowgirls. 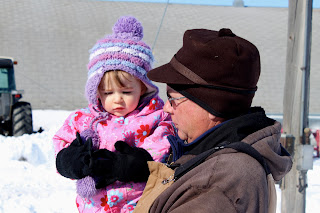 In the afternoon, Miss E, Miss A, age 21 months today, Uncle Jim, my sister known as “Auntie” Kirsti and I went back to the barn. 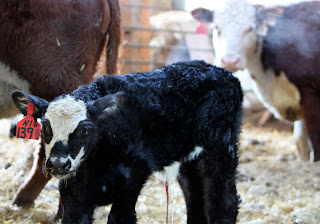 From early morning until supper time, 10 baby calves were born. It was an active and happening place in the barn. 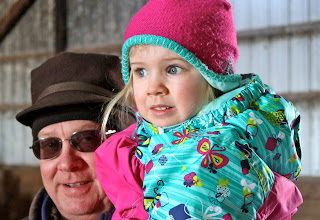 Miss E gained some comfort with the cows. She thought the calves were “too wet” but overall was not too enthused. As you can see in her face, there wasn’t a lot of cowgirl love from her in the barn. 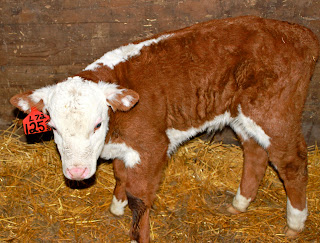 And despite the cuteness of the fresh calves, Miss A cried and shouted “Get me out. Go now. Now. Out!” 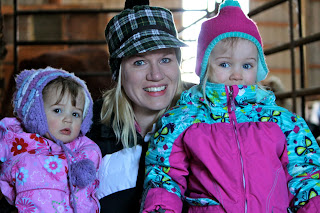 Miss A stopped bellowing louder than the cows and calves for a few pictures with me.
The girls will be back in the barn again…and again whether they like or love it. And hopefully they’ll appreciate the foundation and understanding they gained from being exposed to real life on the farm…

especially when coming in the house from real life on the farm includes plenty of Great-Grandma Nola’s homemade brownies.
We can all be farm girls with a little bribing with brownies! 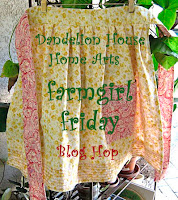 Previous Post: « What is an #Agnerd & how can you be one? Or maybe you are?
Next Post: These are the moments that matter most… »