I spent the earlier part of the week in iced covered, snowed in Atlanta.

I was accompanied by 6,000 American farmers attending the American Farm Bureau annual meeting.
It didn’t slow down the meetings or events but the weather stopped everything else in Atlanta.
Farmers are resilient. They can deal with snow, ice, no maid service in our hotel, no transportation options and even the cold cuts buffet line as the only food option available for lunch.

But farmers need coffee. I live 97 miles from a Starbucks. I was downtown Atlanta and I couldn’t even get a Starbuck’s. All employees stayed home.
But the farmers I was with were still smiling.

Ray Prock, Dino Giacomazzi and Jeff Fowle are California farmers and ranchers I work with in the KnowACaliforniaFarmer effort.
Why were the farmers smiling in the snow without even having their daily Starbuck’s fix? 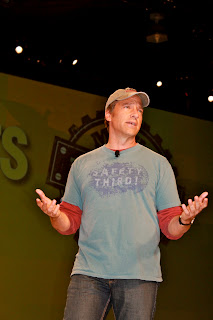 Because Mike Rowe made it through the snow to visit with all in attendance at the Farm Bureau annual meeting. Mike Rowe of the popular Discovery Channel television series Dirty Jobs spoke to our entire group.
Mike Rowe has been on numerous farms doing many of the dirty jobs farmers take on every day from milking cows to feeding hogs to castrating lambs on a ranch for Dirty Jobs episodes. Through this experience Mike Rowe has become an advocate for farmers and ranchers.
Did you know 300,000 American farmers produce 85% of the food we eat or export in the United States? 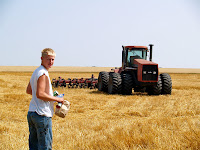 98% of the American population is not involved in agriculture. Actually most are at least three generations removed from the farm.
Mike Rowe said that if you “scrap the brown off a farmer and you’ll find the greenest people in the world”. 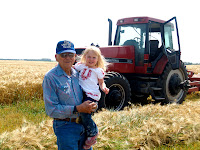 It is true. All farmers I know are green and environmentalists. They are sustainably farming their land to produce more food for the growing population. The land my family farms today is the same land we have farmed for five generations and hopefully there are five more generations to come. Farmers are conserving water and nutrients and daily impacted by the factors out of their control like the weather than impacts their profitability.
As Mike Rowe wrapped up talking to the farmers in Atlanta, he said,
“You don’t need me as a spokesman. You need more of you, advocates. Lots of them.”
It was music to my ears. Whether you know a farmer or not, we all need to advocate and care about where our food comes from and support the 2% of the population that is growing and producing the safest and healthiest food in the world for us, America’s farmers and ranchers.
I learned also that Mike Rowe has quite the following and fan club. I have watched some DVD’s of the shows that our son has. But I am never a regular television watcher due to the chaos of our life. However, after hearing Mike Rowe speak, our DVR is now set to record weekly Dirty Jobs episodes.
Do you watch Dirty Jobs? What is your favorite episode?

Previous Post: « Wordless Working Mom Wednesday: A Surprise In My Suitcase
Next Post: Up on the rooftop »