When Miss E was about Miss A’s age she had to wear a pink cast on her broken leg. My friend Julie and her daughter Miss Lauren sent Miss E the book Pinkalicious in mail as a pink get-well-soon gift. It quickly became the most read book around our house. I have been a Pinkalicious type girl since I could walk. Pink is my favorite color whether it is trendy or not. My girls probably didn’t have a chance to love any other color. It’s in the DNA.
Pink isn’t just a color though in our family. It is a part of our brand.
After all…we are the Pinke family. God knew long ago I would marry Mr. Pinke and pink being my favorite color and a part of my overall look, attitude and brand was most appropriate. The Pinkalicious book and now birthday party are a continuation of the ongoing pink life we live.
When I read on Laurie’s Life about a Pinkalicious birthday party, even though it was three months exactly to the date ahead of Miss E’s birthday, I showed her the blog and we started plotting her own birthday party. We simply read the book every day at our house but didn’t know that Pinkalicious has been turned into a Broadway musical. It is all the rage for a theme for little girls’ birthday parties. 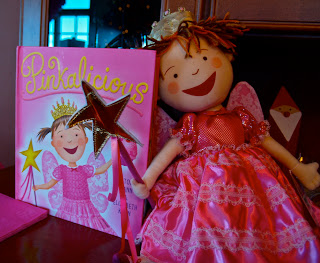 Via Amazon, I found a few Pinkalicious items for Miss E beyond the book including the Madame Alexander doll and a sticker book. But about six weeks ago between Nathan’s work, my travel schedule, family, church and community commitments, I realized I was going to be not much of Pinkalicious birthday party planner. I Skyped (video chatting via computer for you none-Skypers) my sister and engaged the most detailed, organized and creative party planner I know. We set a frugal birthday party budget and away she went planning the Pinkalicious party. 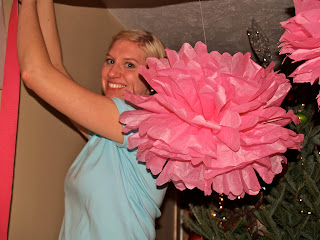 The super party planner appeared on the prairie Friday night and got to work with her decorating while Miss E and I shopped for pink peanut-free food and baked Pinkalicious cupcakes.
Kirsti had pink tissue paper left over from her (pink) spring wedding and made fabulous tissue balls, an idea she got from Martha Stewart. I am always impressed when a person can actually take one of Martha’s idea and put it to good use. The only thing I have successfully done of Martha’s is to make her cheese balls for parties. And I’ll never be able to make tissue balls. 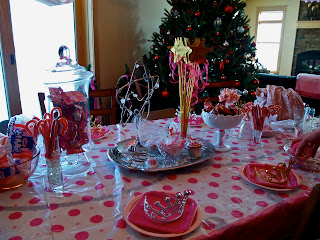 Kirsti came armed with a box of pink goodies from Oriental Trading that cost a total of HALF of the budget we had set. I love being under budget. Miss E and I spent the remainder of the budget at our local grocery store buying every pink food we could find or think of to make.
The imperative on the Pinkalicious party food was that it had to be peanut-free for a friend attending.
Peanut-free is not just like having a bit of an allergy that bothers you like my husband does with dusts and molds. For our friend it is a life threatening allergy and the allergy level is at its highest with this child. A trace of exposure to peanuts is deadly. It is a life altering experience to live with for our friends and their family. Our prairie community is making adjustments from every food we prepare, share and/ or sell that the young child could come into contact with to make sure nothing exposes this young child to peanuts. With that in mind…I put on my peanut-free Pinkalicious birthday party menu hat and consulted a few times with my friend to make sure everything I was having at the party was safe.
For the peanut-free birthday party menu, I chose mostly store-bought items that were pink because I could list out and read the ingredients. Pink ring pops, pink bubble gum tape, pink candy canes, pink My Little Pony fruit snacks, pink marshmallows, strawberry ice cream, pink peppermint ice cream, raspberry sherbet and raspberry ginger ale for pink punch and more. 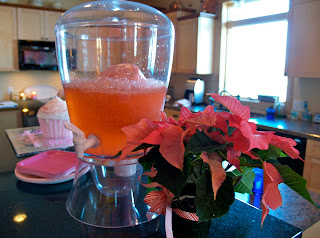 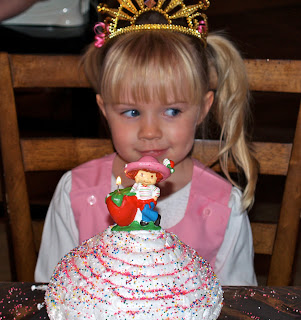 Plus we had peanut-free homemade Pinkalicious cake and cupcakes which we will blog about more this week. 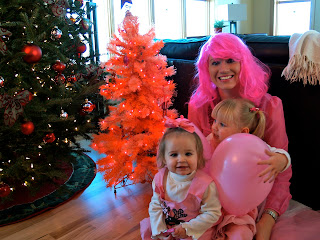 Miss E’s request and idea was for everyone to wear pink. Kirsti took this to a whole new level by ordering she and me pink wigs. Santa Claus brought Miss E a pink Christmas tree last year so that was a part of the decor. 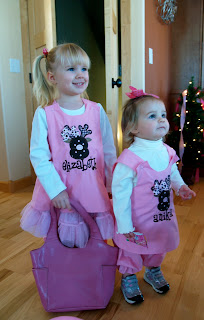 Ashley at SheSheMade sent us some fabulously pink reindeer outfits that I purchased for the girls to debut at the Pinkalicous party. 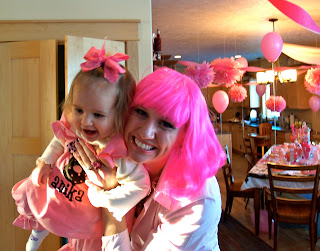 Auntie Kirsti made the party so memorable and fun for all. 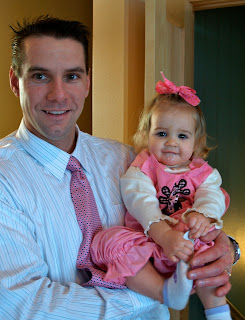 My mom did some shopping while I was attending a downtown Minneapolis meeting with my farmer dad last week. Before I departed she had a Pinkalicious outfit for Nathan to wear to the party. Big brother had a shirt bought by Kirsti with a pink stripe in it but he was quite busy watching football during the party. (North Dakota State beat Montana State…in the playoffs.) 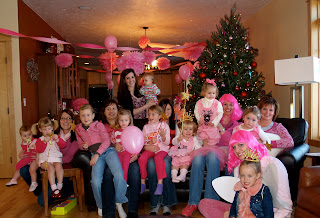 Miss E’s friends and their mamas came with their finest pink attire.
We read Pinkalicious the book, played games, decorated fairy wings and each had magic wands. We ate pink cupcakes like in Pinkalicious, listened to the fantastic play list of music Kirsti had put together including all the Pinkalicious musical tunes but we never turned the color pink like in the book…thankfully. 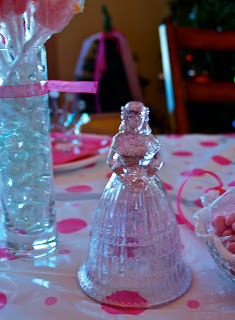 My late great-grandma Esther’s pink glassware was used in the pink party and added to the ambiance. 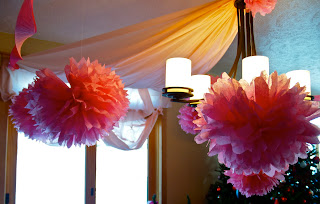 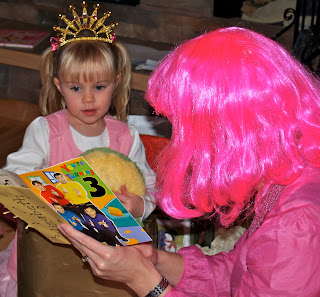 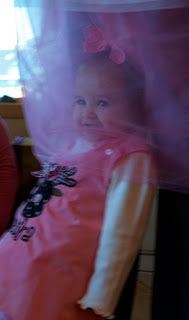 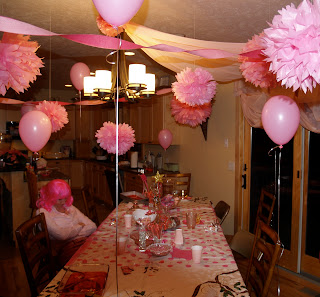 It was a grand Pinkalicious success that led to the party planner needing a nap.
See more of the Pinkalicious party decor on Kirsti’s blog.
I couldn’t bring myself to toss those beautiful tissue balls today. Instead they are finding a temporary home to hang from the ceiling in Miss E’s pink bedroom.
What could more appropriate for the Pinkalicious Princess Pinke on the prairie?