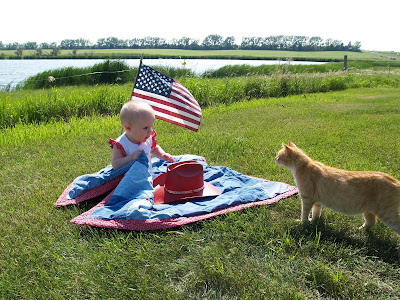 Above: Coopertone investigates Baby E on July 4, 2008
My mom called me today to tell me our longest living farm cat, Coppertone, died.
I gotta say you learn to not flinch much when a cat dies on a farm. They tend to be a dime a dozen and often their lives end under a grain truck. I am not trying to be crude, just realistic.
You only get a little sad even when your dog dies. It’s just a reality of farm life.
But for Coppertone, today I am pausing to remember her.
There are orange cats all over the countryside that can thank Coppertone for their life. In her twelve years of life she gave birth to hundreds of kittens, mostly on my mom and dad’s front deck or in their garage.
Coppertone was my mom’s “chosen one” for a farm cat. She was a stray kitten who came to live with us at the farm in the summer of 98′. Her orange color got us away from decades of brown and gray farm cats.
Hunter was about 10 months old when Coppertone arrived at the farm and somewhere in my archives I have film pictures of him holding Coppertone as a kitten. I was home from UGA living at the farm that summer and we had so much fun with her.
Coppertone was special enough to live on the deck, not in the barn. She would sit for hours and watch us through the patio door, staring us down as we would eat in the kitchen.

Coppertone wintered in the garage with a bed of straw in a garden wagon for her kittens. She spent most of her life pregnant and nursing kittens. She had a hard time weaning her kittens and would sometimes be pregnant with another liter, still nursing her larger kittens. She was so special that she didn’t just get dry cat food to eat, she had a special stash of canned cat food and often had warm milk to drink. Sometimes she would sneak inside and run through the house. On very cold nights, she slept in a cat kennel in the house. No other farm cat ever had such privileges.

The best hunting cat we had ever seen was Coppertone. We are hopeful her skills have been passed down to her many descendants to keep the mice and gophers at bay from my parent’s farm house.
With so many memories with of our special farm cat, today I pause, to give a salute to dear ol’ Coppertone.

We will miss you.