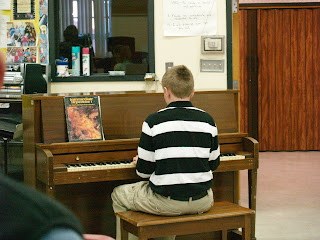 Hunter competed in his piano festival early Saturday morning in a neighboring town’s high school music room. Auntie Kirsti snapped this photo before the competition began as Hunter was warming up on the piano. Grandpa Fred, Mama Jane, Auntie K, Nathan and me were all able to watch Hunter perform. The girls had a play date with Nana and Grandpa Eldon. This is Hunter’s third year of lessons and if he were to get another “Superior” rating he would earn the coveted gold cup. Each Superior rating gives you five points. You need fifteen points for your first gold cup.
Hunter has been working on two pieces for the festival since mid-September. Auntie Lori originally helped him play through one piece titled “Majestic Mountain” when she was here for Anika’s baptism in September. Hunter recorded her and has been playing it back nightly when he practices so he could make the song sound like Auntie Lori. That practice technique worked! I actually just attempted to post of video of the night before the festival when Hunter was practicing his music at our house. I am just learning blogger video technology. It was too long! 129MB and the software only allows 100MB of video. So it goes. You can trust me that Hunter’s long hours of practice resulted in him playing beautiful music both at the piano festival and again on Sunday morning in church when he gave a repeat performance for our Missionfest service. 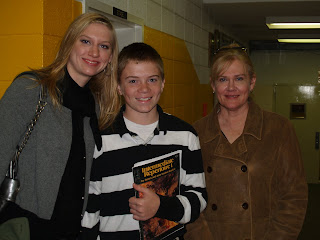 Above: Auntie K, Hunter and Mama Jane just before the piano festival
Most exciting for Hunter James was that he earned the Superior rating he was aiming for and is anxious to receive his hard earned gold cup from his piano teacher. Now we just need to keep encouraging him to play for another round of piano festivals and more gold cups!