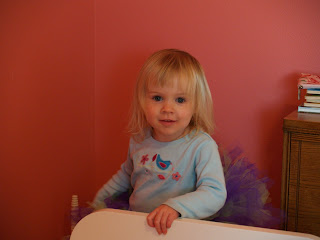 Elizabeth woke up early from her nap on Saturday. Anika finally was taking a real nap in her crib. For about ten minutes I had both girls sleeping at the same time and was home in a quiet house. 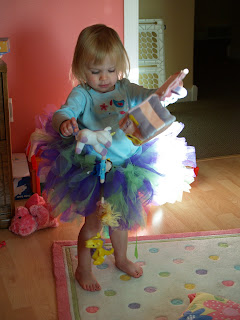 Miss E put on her tutu and turned on her music to dance and play in her bedroom. Our Busy Bits girl dances any chance she gets. She likes her “Bebbeth moozic” (Elizabeth music) which is a CD of songs that sings her name in the songs. Other favorites include Johnny Cash (Daddy’s influence!) and “hissmiss moozic” (Mama’s Jane influence who listens to Christmas music at least six months out of the year).
This particular afternoon we danced to Bebbeth music and played (and folded some clothes). And Anika slept until… 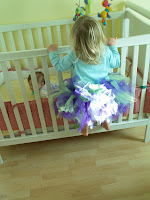 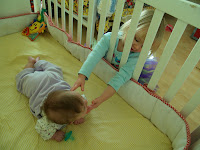 The phone rang and for 12 seconds I turned my back on Miss E. She obviously jetted next door to her little sister’s crib and told her nap time was over. Life is too short to sleep the afternoon away. 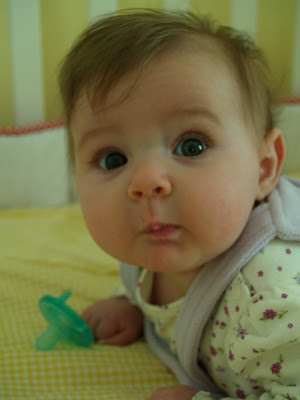 Our sweet baby girl did not seem to mind. She goes with the flow 99.9% of the time. Thankfully. She is already accustomed to her big sister’s antics. 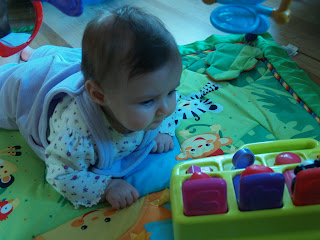 After her nap A was just chilling on her play mat checking out toys. 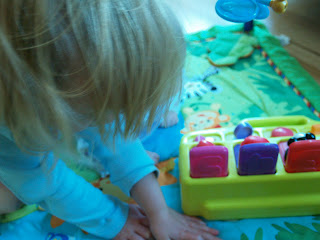 Until Miss E swooped in and decided… 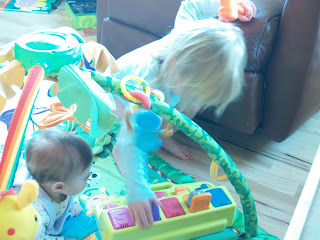 it was her turn to play with that toy. 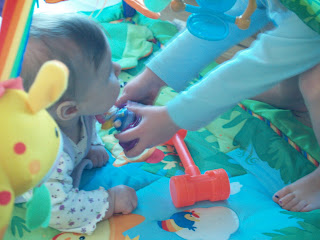 Instead Anika could have a hammer and a Little People toy.
This is just the beginning of Anika adjusting her big sister’s plans and ideas for her!