Hunter left home in early July for summer school and daily football workouts. He hasn’t been home since but visits my parents at the farm which is an hour from where he attends college now at the University of North Dakota. Our prairie home to his dorm is 240 miles. We’re learning the fastest routes to drive it!

The first six weeks Hunter was gone we saw him every week or two but now we had not seen since his August birthday celebration a month ago. This mama’s heart hurt just a tiny bit but don’t tell the 19 year-old college kid. We want him to LOVE college and excel in it.

He’s taking a full load of classes with studying plus a schedule of football practices, meetings and weightlifting. Like any parent who has gone through this chapter of life before us knows, pushing the kid out the door to see if they can fly might be more stressful on the parents than it is on the kid(s).

Hunter is a fairly consistent for a teenage boy communicator and keeps in touch with texts, phone calls and Facetime from his iPhone. And he wishes I wouldn’t have gotten Snapchat. Bahaha!

Without him around full-time anymore, our home is quieter. Our grocery bill is less. Our calendar is less crowded without his many high school activities of fall filling it.

But we were VERY excited to attend his first fall activity on our calendar this weekend, the first University of North Dakota home football game. And it was Potato Bowl which is a big deal in Grand Forks, North Dakota. Our girls got in on the parade with Nathan and me. I shared some pictures and moments on Instagram and Snapchat (@katpinke on both.)

It was also the first game we attended as UND using the “Fighting Hawks” logo. For a lifelong North Dakotan and UND forever fan, it’s painful for me. The entire name change process was terrible.

But it is a name, a logo, a game…we have bigger global issues to solve. I tried my best to move on and wore a new Fighting Hawks shirt to support our boys of the fall. 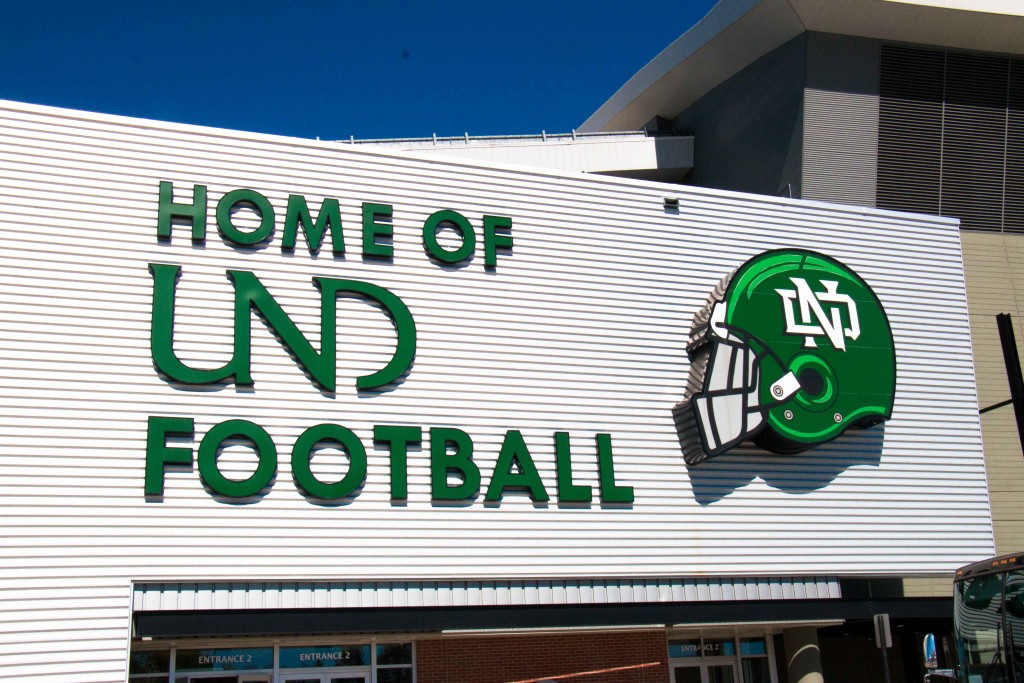 The last time I had this much excitement for UND football was when I was working in UND Athletic Marketing, finishing my degree and Hunter was four years-old. It was 2001 and UND won the Division II National Championship. Coach Bubba Schweigert was the defensive coordinator on the team.

Fast forward 15 years, Coach Bubba Schweigert is now the head coach. He is cut from the same cloth we are. We know and trust him and couldn’t imagine sending our son off to play for anyone else. 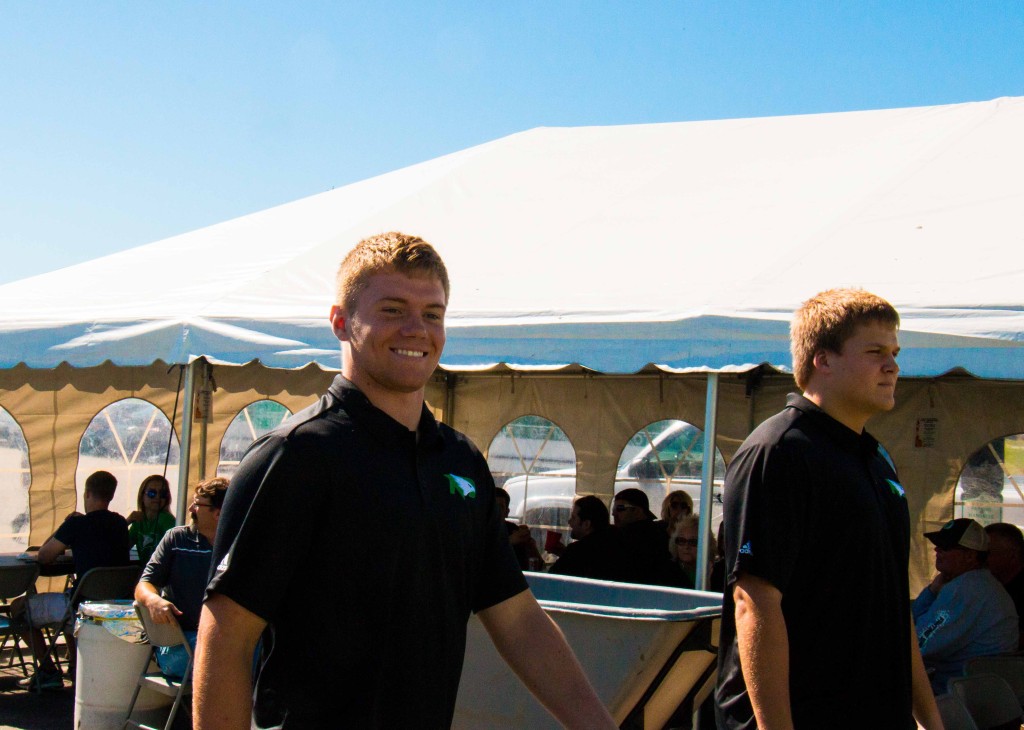 Behind the lens on Saturday when I saw these pregame moment, my anxious new to this college thing mama’s heart calmed a bit.

He’s happy, genuinely happy to be a part of the University of North Dakota and the football program.

But this is Hunter and seeing his smile and confidence reminded he’s in the right place, learning to fly on his own through life, surrounded by teammates, coaches, friends and fans in the stands who support him and push him to be more than he is today. 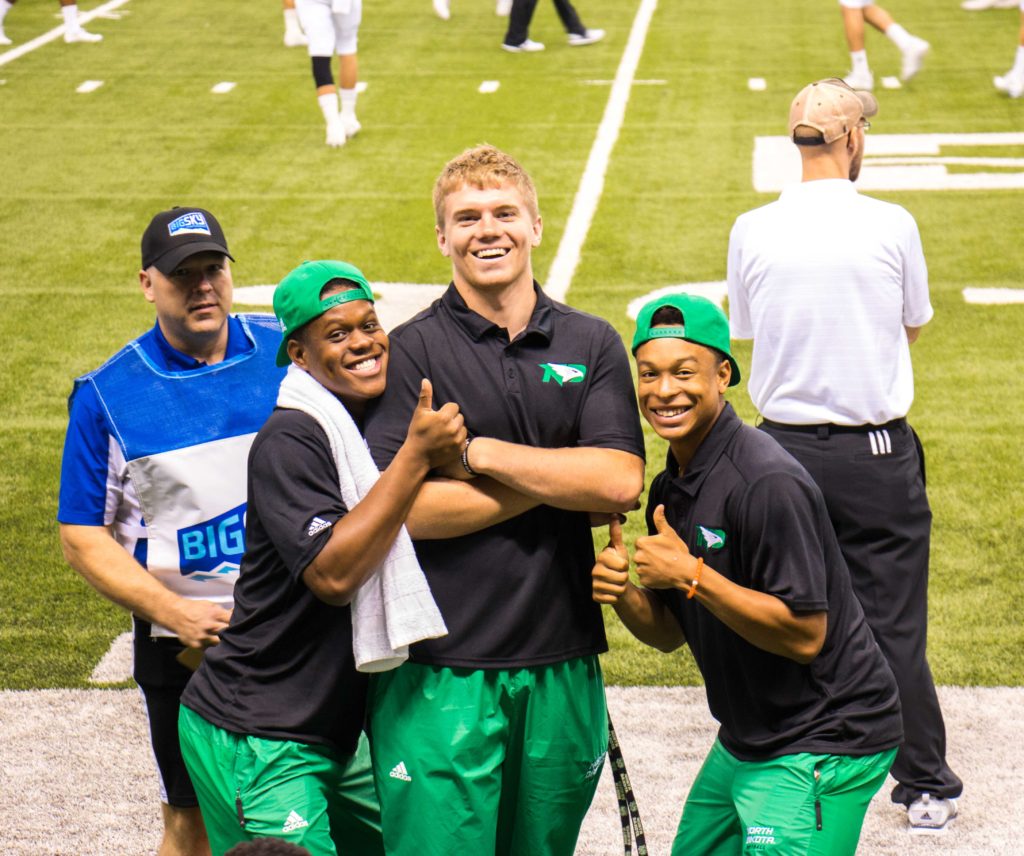 The next time I miss Hunter, I’m going to look at this picture.

We walked into the Alerus Center stadium for the game and the redshirts (players who practice daily, don’t play in games this season and saves a year of eligibility) were on the sidelines. Hunter waved at us. I thought he was waving at us. Big smile. Big waves.

Then I realized he was probably waving at his girlfriend who was with us. Girlfriend waves and smiles are bigger than waves to mom I suppose.

But I still walked down to the end of the seating to snap the moment. The first home game for our boy in his new chapter. I have been parenting him for more than half of my life now and still don’t have it figured out. Nathan and I together have team parented for ten years with support and help from our own parents. But seeing a happy child…makes for happy parents at any stage or age.

Aside from seeing the happy smiles, visiting and laughing together, the BEST part of the weekend was the DOUBLE Overtime North Dakota WIN over South Dakota!