When I played high school girls basketball, the season was in the fall. I would be getting ready to play by the end of July like it is now. Back in the “olden days” as my son would say. North Dakota moved girls basketball to be a winter sport after I graduated from high school. We actually started basketball practice in the sweltering weeks of early August. Two a day practices in a non-air conditioned gym.

I was a tall, very thin, awkward basketball player. I had untapped potential but mostly didn’t want to be like my dad, who had been a local basketball star. So whatever he told me to do, or made me do like make 10,000 baskets a summer, I rebelled against.

One of those things was to be aggressive. My dad had been telling me that for years. But I did not know how to be aggressive. Dad would try to teach me to get my butt down, get my elbows out and to “be big!” Be big. Be aggressive. Chase after the loose balls. Get in position and get the rebound. I mostly tuned him out.

I was bony which I did eventually learn bony elbows were an advantage but I was terrified of most girls shorter than me with 20 lbs. more on me. They could shove me around and I split to the floor like a toothpick in two. It was there on the basketball court in the humid gymnasium days of August that I heard someone else give my dad’s advice, “Luke, (a kind high school nickname from my maiden name) BE AGGRESSIVE!”, our assistant girls basketball coach, Mr. Olson yelled at me. His voice pierced through the humidity and seemed to bounce off the gym walls and ring as I picked myself up off the floor.

With time and maturity, I learned to be aggressive. Not over-bearing, although some, mostly men, have taken it that way through the years. I simply worked at being aggressive. I had a custody situation with my son at very young age. My attorney was aggressive. She taught me to be a bulldog and to fight always for the best interest of my child. She was right. It unleashed aggressiveness in me that until you are a mother you do not know you have. 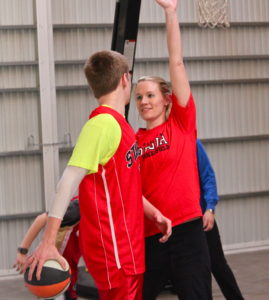 Now I stand tall against my son in basketball. (I lose.)

Aside from being a mother aggressively working for the best interests of my son, I learned to be aggressive in my job, marketing for clients. I had to ask for more budget and had to justify the spend with results.

I had to be more aggressive in asking for increases in salary which my parents and husband trained and taught me business leadership and management skills to achieve my goals. I had work harder to prove I was worth the increase. I set aggressive business goals for the company I was working for at the time and aggressively achieved many.

Then came social media, I wasn’t aggressive for years in social media on a personal level. On some issues, I am still not. But every so often, I am. And after Blogher with my new shoes on, I am feeling empowered. And aggressive.

If you do not take on an aggressive approach in social media, your message often falls into the abyss. There are a lot of things I write and share that fall into the abyss and I am okay with it. But sometimes I have a blog post I put myself into more than usual. Like last year when I wrote about being a college mom on food stamps. I had a few friends read it ahead of time to proof. I shared with some friends when I hit publish and asked them to comment and share. It was vitally important to me that it did not fall into the social media black hole. I tweeted it. I shared it on Facebook. I started getting scores of emails and messages about the post. They were personal stories. I put myself out there, shared my story, aggressively promoted and reaped more benefits than I could have ever known.

Now I am not suggesting you standing up on a hill, beating your chest and screaming your message. Listen. Respond. But your voice doesn’t have to be timid. If at first you are not heard, try again. Keep going. Do the next thing.

If you aren’t sharing your message, others won’t. You cannot write something and expect the world to find it. A fellow North Dakota blogger, Julie, gave great advice a couple of weeks ago on How to Write a Viral Blog Post after her post of The undeniable facts of the safety of Diet Coke (which I LOVED) went viral. Read both posts after you have finished this one. You won’t be disappointed.

To achieve success at times in social media, you have to follow my dad, Coach Olson’s and the girls basketball cheerleaders’ advice and “Be AGGRESSIVE”. 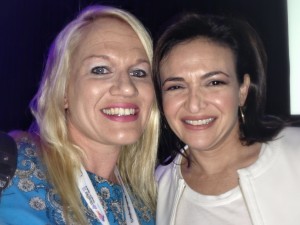 Facebook COO & author of Lean In, Sheryl Sandberg & me at Blogher.

My social media presence is here, where I create content in most often written and photo form. But there is Twitter, Facebook and Instagram. Then I have future goals to go into new spaces. I want to do my best to “Lean In” as Sheryl Sandbery’s best seller has started thousands of conversations about.

I want to create content for my passions and for good. I will not wait for others to fill the space. I am not throwing elbows. I am not “big” in social media. (Although in real life, I stand six feet tall and have hips and wide shoulders.) But my dad did eventually teach me to get my butt down and hold my own ground.

So today, I’m in the lane. Ready to catch a pass. Ready to rebound. Ready to shoot. And when needed, I’m aggressive. And I’m not getting pushed over by the big girls…or big boys like I did in high school anymore.

What is your approach to being aggressive?

Previous Post: « #Blogher13 Recap: No matter your shoes, show up at the table
Next Post: A Harvest Pick-Up From Grandpa »