They have been called The Greatest Generation in the best selling book by Tom Brokaw. It is a title and phrase most deserving I believe. Today I pause to honor and reflect one the greatest men from the greatest generation. 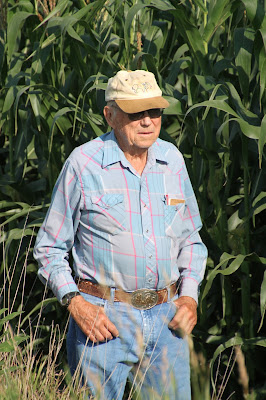 Both of my maternal grandparents are a part of the greatest generation. Today is my grandpa’s birthday. 88th birthday. 88th reminds me of 1988 when he first started having heart troubles. He fought through it all, eats an extremely healthy diet thanks to the meticulous cooking of my grandma and discipline of my grandpa. I was there in 2006 with my grandma and aunt when he came out of quadruple bypass heart surgery without complications. It was a moment I will never forget.

Grandpa is tough as nails and soft as a warm homemade cookie.
He will work long days for months on end. He always has dirt in his fingernails. He laughs. He cries. He is comforting. He is casual. He loves wearing heavy flannel shirts in the fall and winter and lightweight denim shirts in the spring and summer months. .

I have never seen him anything but Wrangler jeans with the occasional suit.

I was at the men’s store when he bought the above new suit for our wedding. It was seven years ago. My grandma looked at him and said, “This is probably the last suit you will buy.” Grandpa smiled in the mirror and said, “Yes you can bury me in this suit.”

Thankfully, Grandpa and Grandma are still living healthy and full lives!  They grew up on the same road, attended the same one room schoolhouse with their parents as friends. They have been married since 1951.

What makes Grandpa Sonny so great and unusual in this day and age?

He is passionate for his family. He is as loyal as the day is long. He stands behind you, supports you and holds you accountable. He beams with pride, rarely scolds but teaches discipline by example. He worked unselfishly for decades to be successful not for himself, but for his family. My grandma and he made education a priority and worked to help pay for all of their children’s college education. They did not go on vacations or drive fancy cars. They put their family first always and extras were not always there.

Grandpa is a World War II veteran, educated with a college degree from North Dakota State University and a lifelong farmer. He loves his country, his fields and his cows as much as he loves his family. 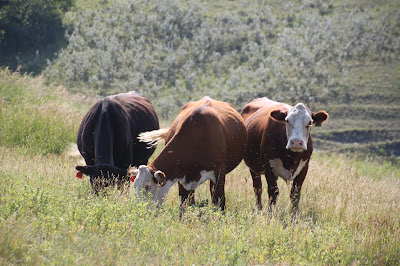 It was that many years ago that you would have never seen a black (Angus in the breed) cow on our family farm. Grandpa is a Polled Hereford man. (Brown with white, no horns.) But one thing about Grandpa, he adapts. It is not always easy but he educates himself and believes in advancing our family and farm.
The first time he ever went “south of Missouri”, as he told me, was when I took him with me to the National Cattlemen’s Beef Association meeting in 2004 in San Antonio, Texas. I was never so proud of my cattleman grandpa as I was to have with him with me at that meeting. While I was in meetings, he talked with many who would be strangers but became friends. He is always proud to talk about our family and farm. 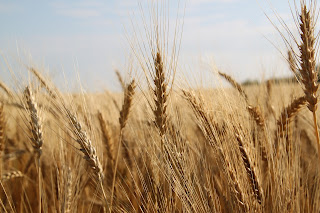 The fields our family farms today have been farmed since my grandpa’s grandpa broke ground in the 1880’s when he immigrated from Norway. Today my mom and dad farm that land. And Grandpa is there to work and help anytime. Grandpa has treated and loved my dad like his own son, whose dad died when he was 27 years old. Grandpa and Grandma have five children of their own. I was the first grandchild and only for many years. Today they have 10 grandchildren and 3 great-grandchildren.

The day before I left the farm for the University of Georgia, a terrified teenager sure I might be making the worst decision of my life, my grandpa took me on a long drive all around the farm. He gave me more advice and told me more stories that day than ever before and then we cried harder than we had ever cried. He was launching me, giving me the courage to keep going when I was not sure I could. It was not easy but he gave me the permission to go after big dreams, far from the farm with the assurance he would be there for me when I came home.
For 34 years, my lifetime, my grandpa has been a rock for me and our family to rely on and a listening ear…although we now have to talk louder. 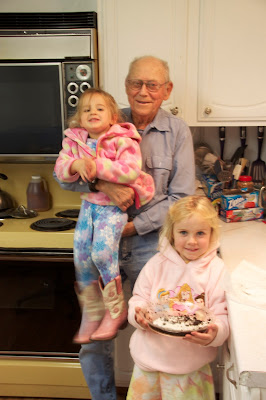 We visit often at the farm. Grandpa is proud to live in the house his dad built in 1919, where Grandpa was born and where generations of our family have lived. 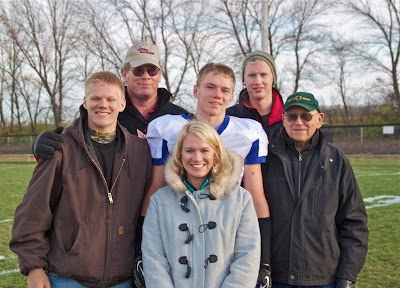 Above all, Grandpa is intensely proud of all of his family.
Ask him about family and he sparkles. 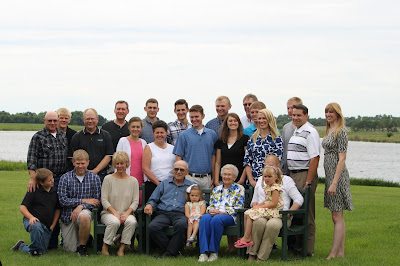 Ask me about my grandpa and I sparkle.
We love you Grandpa Sonny. Happy 88th Birthday!
Thank you for being a great husband, father, grandpa, great-grandpa and true friend and for setting the standard from the greatest generation.

Previous Post: « The boys and girls of a prairie winter
Next Post: Singing the Star Spangled Banner (2 videos) »