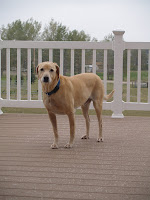 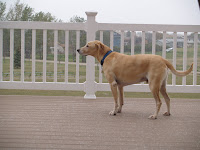 Charlie dog was not impressed when I let him out onto the deck this afternoon for a brief fresh air break. He stood there just long enough for me to take his picture before coming back into the warm house for an afternoon nap on his bed. You can click on the picture and blow it up and see…snow flurries. Charlie was looking at me and I’m sure thinking “say it ain’t so!” Snow flurries on October 9th? 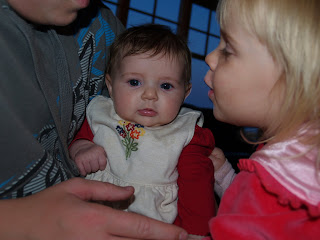 It is cold, windy and not even fall like weather. It’s blustery like old man winter is coming to stay. Yuck. But it is warm and full of life inside our home! This picture truly shows Anika taking it all in around her. Last night after we were all home from Hunter’s game in which they won. Hunter was holding his baby sister but his other little sister had to make sure she was giving baby Anika plenty of attention too. Anika doesn’t look too bothered or frazzled by it does she? 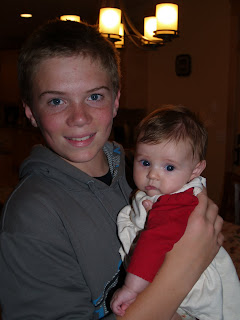 I don’t know what it is specifically but Hunter and Anika look more similar to one another in this picture to me. Shape of their face? Noses? I do not know but they sure are cute big brother and baby sister together. 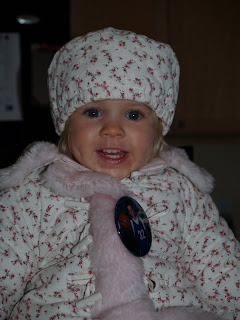 Above: E was ready to cheer on Hunter last night and said “Me wear Hunter!” What? Oh, she wanted to wear Hunter’s basketball picture pin. She may be “wearing Hunter” for awhile because she does not want to take that pin off her jacket. She has become a demanding little sister at times towards Hunter. Such as if he wants to quick watch Sports Center on television to check scores of games…she says “No Hunter! Me watch movie. Ernie and Bert wake up!” Translated into…we have convinced her Ernie and Bert are sleeping and then the television turns on and she thinks they are awake and available at any moment for her viewing. It is hilarious actually. E is learning the whole world unfortunately does not immediately jump to her commands. Her mother is still learning that life lesson too. E is a demanding little sister but definitely the most loyal and loving fan of Hunter’s.
It is hard to believe Elissa will be two years old in two months! She is actually 22 months old today. Ever since Hunter’s 12th birthday in August one her favorite songs to sing is Happy Birthday. Although she says BERTday, like Ernie and Bert. If you ask E how old she is going to be on her birthday, she very matter of factly tells you “Five!” and holds up five fingers. This started on the first day of school when we left Hunter’s school and she was in tears because she wanted to stay with Hunter at school. I said, “You have to be five to go to school.” Well, now everyone is five. She told the little girl at the park who asked her age that she was “one” and held one finger up but that “My Hunter FIVE!” Obviously Hunter must be five years old if he goes to school. And come December 9th Elizabeth thinks she will be joining him when she turns five two. We know the time until she is five will go too quickly but E is always ready for the next adventure and she thinks that is school. She prepares for school by practicing her counting and says “One, Two, Free, Nine, Fourteen!” Almost always it is in that order. She will repeat the numbers after me in perfect order but prefers her version better. 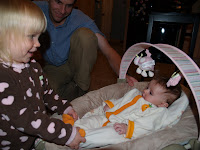 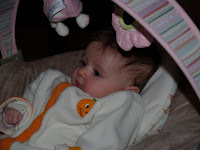 Ebay is my one-stop shop for baby bargains. We wanted to have an additional baby monitor and baby bouncer for Nana’s house since Anika is spending a few days a week over there now. We have the Boppy brand bouncer and it is the best. Anika slept until just recently every night in the pink one we have and Elizabeth spent many hours in it as a baby. It was a gift from some co-workers. On Target.com on sale a new one was $54.99. Well, I got a brand new model, in the box, unopened for $25.99 on Ebay recently. I also got the same monitor we have for a fourth of the price and that was brand new in the box also. My mom has taught some tricks of the trade in getting Ebay bargains and I do limit what I buy on there or I’d be constantly looking for the next deal. So far I have yet to have a bad buying experience. Daddy and E put together the new bouncer last night and Anika got to try it out for the first time. E was disappointed of course that she did not get a turn. This bouncer has new and improved music which Elizabeth insisted on showing Anika how to dance to last night. 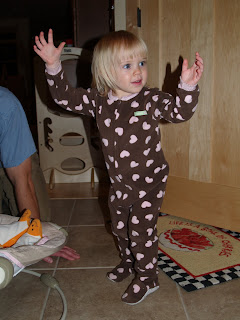