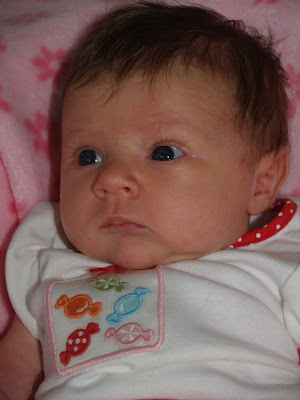 Anika was one month old on August 1st and five weeks old as of yesterday. Yes her cheeks have really filled out. She is eating more, spitting up less and still sleeping plenty. If she could sleep at the same time in afternoon as her sister and at the same time as me every night that would be perfect! But when she does wake in the night it is only a few grunts, no crying and then feeding. She falls back asleep quickly and so do I. 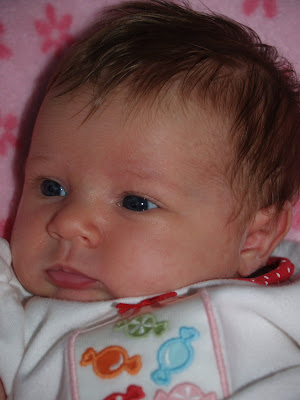 Anika is content a majority of the time looking around, being entertained by her ever entertaining older sister and likes to snuggle on our shoulders. Big brother Hunter will be home soon to hold his darling “sissy” as he says and she will be ready to snuggle with him. My mom says Anika is “the best baby ever” and I know I am bias but of course I agree. She is such a sweet girl. 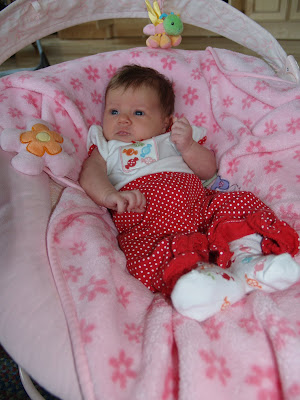 Miss Anika is also long-legged and look at that hair!

I had mentioned earlier this week that my friend Laura gave us tickets to the Elmo and Sesame Street Live show in Grand Forks last week. Laura emailed me a few photos. 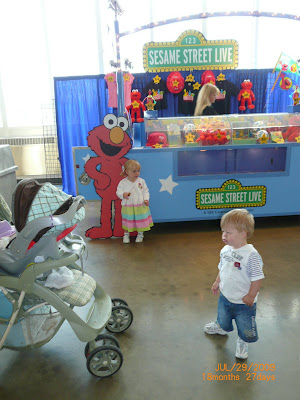 We were trying to get Elizabeth and Laura’s son Brady to stand together by Elmo. That did not work! We referred to our outing to Elmo as Elissa and Brady’s first date with parent chaperones of course. They are not going anywhere by themselves…ever with out us. Laura and I were due within days of one another during our pregnancies. Elissa came early and Brady arrived late so they are three weeks a part in age. 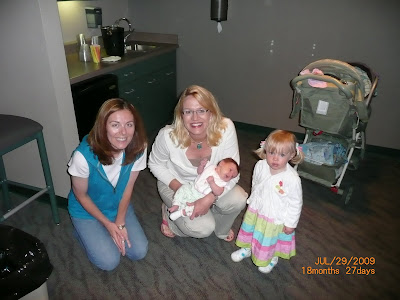 Laura, me, Anika and Elissa gearing up for the show
Anika was already looking toward the stage and noise. I am sure she was excited to see Burt, Ernie, Cookie Monster and Elmo too. Her big sister tells her often about “Ehnie and Elmo”.
A side note story…Laura was a great high school basketball player who was two years older than me. Her school and team I despised (and still do). They won state championships and beat us by 35 points on a bad night and 20 points on a good night. You loyal fans (immediate family who were there to support me, knowing we were going to get pummeled) remember those long games. Laura was tough and aggressive on the court. I imagined her to be a terrible person of course because she was the dominating and experienced senior star the boxed me the scrawny sophomore out in two seconds. She could have played college basketball but a series of knee injuries had her stop playing. When I transferred to UND ten years ago and started waitressing at the only smoke free bar and grill (they are everyone now!) who would be on my first shift to train me in? Miss Laura. She was not a terrible person! She was kind and soft spoken and became a great friend. When we were not waitressing together, we walked and walked and walked together for years. Sometimes Hunter rode alongside of us on our walks with training wheels on his bike and eventually no train wheels. How time flies! Thankfully neither Laura or I need the tip cash we used to make on weekends waitressing and both us have careers and growing and busy families now. Our friendship has definitely lasted. And now we laugh together about high school basketball and college waitressing stories! 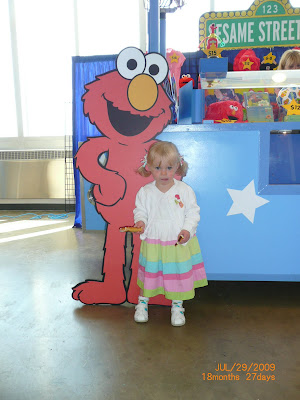 An intermission break for snacks. Elissa was satisfied with her fruit snacks I brought from home and a $3 pretzel and we did not have to spend $18 on a t-shirt or toy for her thankfully. 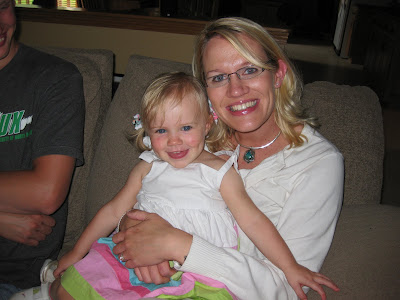 This picture was taken at the Millette’s house after the Elmo show. Since I am rarely photographed with my kids I was thrilled when Rennae emailed it to me. Do you see the sheer exhaustion in my eyes? This was after taking our two kids under the age of two to the Elmo show AND test driving the Honda Pilot and Odyssey AND calling Nathan to tell him I thought we should buy the Odyssey over the Pilot! Ugh. Wiped me out.