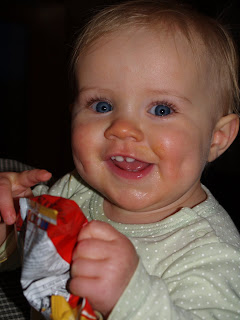 Elizabeth discovered the pantry as a playground last night. 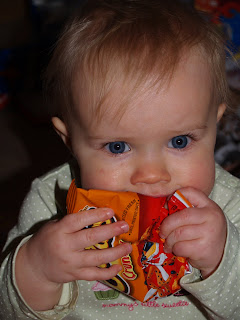 I had a bunch of small bags of chips left over from Hunter’s birthday party. And they were great toys…until Elissa got her teeth into them and had her first taste of Cheetos. She of course wanted the whole bag and that was not a good idea. I happily voluntarily ate them for her. 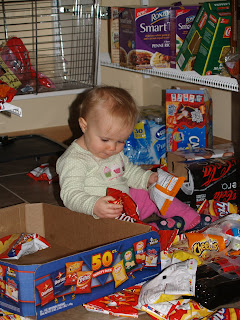 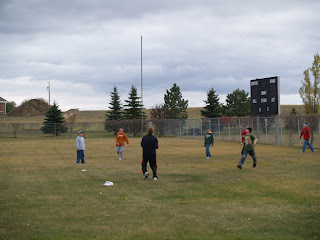 Hunter is off from school for a couple days and I also am home taking off some work time to hang out with the kids. Immediately after school yesterday Hunter got on the phone and called his buddies for a game of football. They played on the baseball field because it has “better grass and is more even” according to Hunter versus our yard which is a former hay field. It was one of those scenes from the window I had to quickly get outside to capture on camera. Happy days. 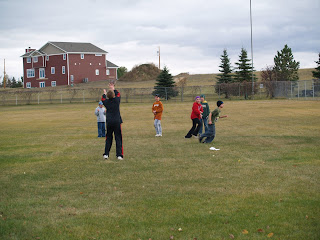 The dirt pile to the right of our house is eventually going to be used for landscaping and level off some areas around the house. For now Hunter burrows down in his “hiding spot” at the top of it which he worked on for a couple hours earlier this fall. It comes in handy when he and his friends are playing hide n’ seek or playing “war”.

After having a busy couple weekends away we are looking forward to staying home this weekend. My forever friend Sara and her son Sam are coming visit us for the first time since we moved into our house. Sam will be two years old on October 31 which also means we have been married for two years. Sam is our reminder since Sara had him just days after our wedding. We have sold a couple houses, moved a few times, had a major career and lifestyle change, had a baby and built a house since Sam was born. It makes us feel like maybe he should be six or seven years old instead of only two!